I Was Wrong About the Limits of Solar; PV Is Becoming Dirt Cheap. The price of solar power is falling faster than many thought was possible. 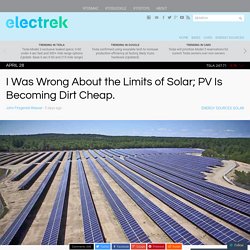 Harvard’s David Keith comes honest with us about solar power: “Facts have changed. I was wrong.” The unsubsidized electricity cost from industrial-scale solar PV in the most favorable locations is now well below $40 per megawatt-hour and could very easily be below $20 per megawatt-hour by 2020. Compared to other new sources of supply, this would be the cheapest electricity on the planet. The price of solar power has fallen for multiple reasons – the largest is that the volume of solar power being manufactured has skyrocketed. And very smart people are predicting that this 240GW of solar power will be only 2% of what will be installed within the next twelve years. Now suppose costs for big systems (>100 megawatts) get to $1,000 per kilowatt by 2020, and you install them in the world’s best locations using a north-south oriented single-axis tracker to a capacity factor of 34 percent.

Source Source. Do you understand how your ESOPs work? Employee Stock Option Plans or ESOPs are perhaps the most important form of remuneration for employees. 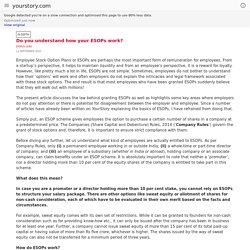 From a startup’s perspective, it helps to maintain liquidity and from an employee’s perspective, it is a reward for loyalty. However, like pretty much a lot in life, ESOPs are not simple. Sometimes, employees do not bother to understand how their ‘options’ will work and often employers do not explain the intricacies and legal framework associated with these stock options. The end result is that most employees who have been granted ESOPs suddenly believe that they will walk out with millions! The present article discusses the law behind granting ESOPs as well as highlights some key areas where employers do not pay attention or there is potential for disagreement between the employer and employee. Simply put, an ESOP scheme gives employees the option to purchase a certain number of shares in a company at a predetermined price. What does this mean?

How do ESOPs work? Startup’s perspective. 20 Everyday Things Whose Names You Never Knew. We do a lot of things in our daily routines. 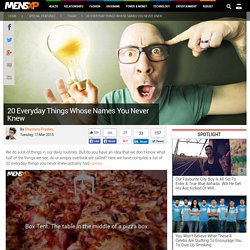 But do you have an idea that we don’t know what half of the things we see, do or simply overlook are called? Here we have compiled a list of 20 everyday things you never knew actually had names. © Thinkstock Photos/Getty images. Essence of Political Science. Reviled. Www.buzzfeed. Www.dailywritingtips. By Mark Nichol Adjectives — descriptive words that modify nouns — often come under fire for their cluttering quality, but often it’s quality, not quantity, that is the issue.

Plenty of tired adjectives are available to spoil a good sentence, but when you find just the right word for the job, enrichment ensues. Practice precision when you select words. Here’s a list of adjectives: Subscribe to Receive our Articles and Exercises via Email You will improve your English in only 5 minutes per day, guaranteed! 21 Responses to “100 Exquisite Adjectives” Rebecca Fantastic list! FMCG. Pruitt–Igoe. Coordinates: April 1972. 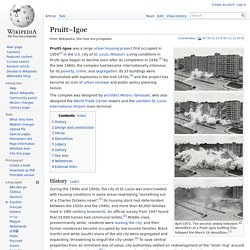 The second, widely televised demolition of a Pruitt–Igoe building that followed the March 16 demolition.[1] Pruitt–Igoe was a large urban housing project first occupied in 1954[2] in the U.S. city of St. Louis, Missouri. Living conditions in Pruitt–Igoe began to decline soon after its completion in 1956.[3] By the late 1960s, the complex had become internationally infamous for its poverty, crime, and segregation. The complex was designed by architect Minoru Yamasaki, who also designed the World Trade Center towers and the Lambert-St. §History[edit] During the 1940s and 1950s, the city of St. We must rebuild, open up and clean up the hearts of our cities. In 1948, voters rejected the proposal for a municipal loan to finance the change, but soon the situation was changed with the Housing Act of 1949 and Missouri state laws that provided co-financing of public housing projects. 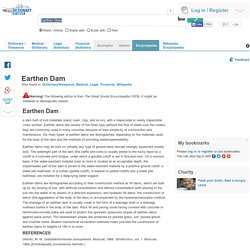 The following article is from The Great Soviet Encyclopedia (1979). It might be outdated or ideologically biased. a dam built of soil materials (sand, loam, clay, and so on), with a trapezoidal or nearly trapezoidal cross section. Earthen dams are usually of the fixed type (without the flow of water over the crown); they are commonly used in many countries because of their simplicity of construction and maintenance. Clairaudient.