Steven Holl Architects. The Mies Crown Hall Americas Prize (MCHAP) has just announced the seven finalists – drawn from a shortlist of 36 projects - at an event in Santiago, Chile. 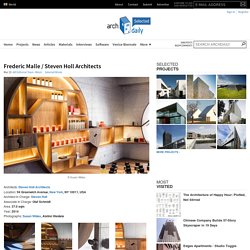 To determine the finalists, the five jury members – Francisco Liernur, Sarah Whiting, Wiel Arets, Dominique Perrault, and Kenneth Frampton - spent the last twelve days visiting projects, speaking with the architects, users and owners of the spaces, and entering into intense debate among each other. As jury member Dominique Perrault noted, “There’s a lot of means by which to evaluate projects – models, drawings, images – but we took all opportunities to test the quality of the architecture. BLDGBLOG: Unconventional Sports Require Unconventional Spaces and Landscapes. [Image: Pier Two Athletic Center by Maryann Thompson Architects, Brooklyn; via Architizer]. 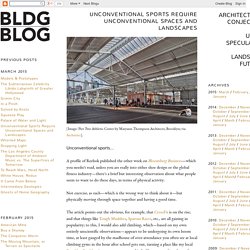 Unconventional sports... A profile of Reebok published the other week on Bloomberg Business—which you needn't read, unless you are really into either shoe design or the global fitness industry—there's a brief but interesting observation about what people seem to want to do these days, in terms of physical activity. Not exercise, as such—which is the wrong way to think about it—but physically moving through space together and having a good time. Flinders Street Station Design Competition. Bulgari Pavilion / NaNA. The Bulgari Pavilion, a temporary installation commissioned by prestigious luxury jewelry brand Bulgari, was designed by NaNA for the Abu Dhabi Art 2012 event held Saadiyat al Manarat, Abu Dhabi November 5-10. 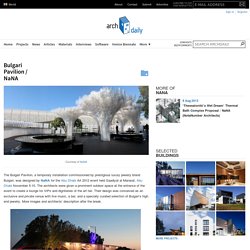 The architects were given a prominent outdoor space at the entrance of the event to create a lounge for VIPs and dignitaries of the art fair. Their design was conceived as an exclusive and private venue with live music, a bar, and a specially curated selection of Bulgari’s high end jewelry. More images and architects’ description after the break. ‘Blossom Gate’ / Prechteck. OMA- Home. Through the Looking Glass: 5 Buildings that Blend into the Environment. Can invisible be innovative? 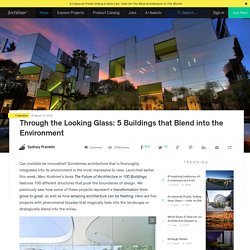 Sometimes architecture that is thoroughly integrated into its environment is the most impressive to view. Launched earlier this week, Marc Kushner's book The Future of Architecture in 100 Buildings features 100 different structures that push the boundaries of design. We previously saw how some of these projects represent a transformation from gross to great, as well as how amazing architecture can be fleeting. Here are five projects with phenomenal façades that magically fade into the landscape or strategically blend into the milieu.

Add To Collection Save this image to a collection Photo by Iwan Baan Glass Pavilion at the Toledo Museum of Art by SANAA The 2006 addition to the Toledo Museum of Art is a building for glass, made of glass. Designers Explore an Entirely New Use for Shipping Containers in Seoul’s Design District. Fashion, design and architecture collide in Zaha Hadid’s recently completed Dongdaemun Design Plaza, one South Korea‘s most popular tourist destinations. 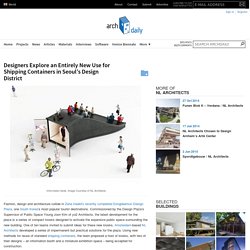 Faster Than a Speeding Building: A Brief History of Breakneck Construction in 5 Videos. If you needed further evidence that the world of architectural design is transforming fast, look no further than Marc Kushner’s new book The Future of Architecture in 100 Buildings, released this week in conjunction with the architect’s uplifting TED Talk. 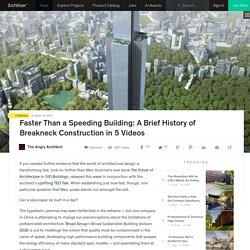 When establishing just how fast, though, one particular question that Marc poses stands out amongst the rest: Can a skyscraper be built in a day? The hyperbolic premise may seem farfetched in the extreme — but one company in China is attempting to change our preconceptions about the limitations of prefabricated architecture. Broad Group’s Broad Sustainable Building division (BSB) is out to challenge the notion that quality must be compromised in the name of speed, developing high performance building components that surpass the energy efficiency of many standard spec models — and assembling them at a staggering pace.

Add To Collection Save this image to a collection. Contemporary Modern Architecture Furniture Lighting Interior Design. Culture Center Spreads. It has now been several months of working on this latest project from which lots of imagery has been created. 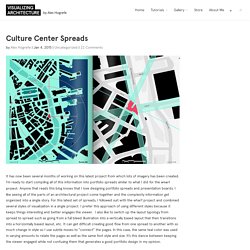 I’m ready to start compiling all of this information into portfolio spreads similar to what I did for the wharf project. Anyone that reads this blog knows that I love designing portfolio spreads and presentation boards. 7 Footbridges That Are Anything But Pedestrian. The humble footbridge might be making a comeback.

For those seeking the High Line's fusion of infrastructure, public space, and real estate energy but who can't afford the price tag of Washington, D.C.'s 11th Street Bridge or London's Garden Bridge, then a simple solution may be at hand. Typically anonymous and utilitarian, one coalition of private and public interests in London is hoping to elevate the footbridge to new urban prominence. VIDEO: Google's new California headquarters is a greenhouse utopia by BIG and Heatherwick. Earlier in the week, we brought you news that Heatherwick Studio and BIG are collaborating on the design of Google’s new Mountain View campus. 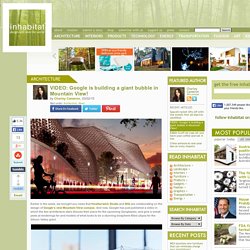 And now, Google has just published a video in which the two architecture stars discuss their plans for the upcoming Googleplex, and give a sneak peek at renderings for and models of what looks to be a stunning biosphere-filled utopia for the Silicon Valley giant. Google’s video makes exceptionally clear that in hiring Ingels and Heatherwick, the search giant hopes to create a campus the likes of which haven’t been seen before in Silicon Valley. As David Radcliffe of Google explains: “Tech hasn’t really found its own language for building; we’ve just found old buildings and moved into them and we’ve made do the best we could.” The campus is designed with a strong emphasis on the natural environment, with office buildings contained within large dome-shaped greenhouses and abundant plant life present both inside and out. . + Google. CJ R&D Center Kinetic Facade. A Mixed Bag: Gehry’s Crumpled Paper-Bag Building Arrives in Sydney. London might be home to the Gherkin, and soon, the Can of Ham and the Tortilla Wrap, but a city halfway around the world is now home to an enormous brown lunch bag — meant, perhaps, to put them all in. 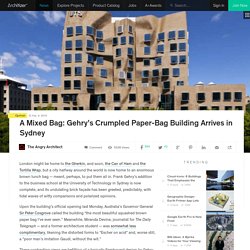 Frank Gehry’s addition to the business school at the University of Technology in Sydney is now complete, and its undulating brick façade has been greeted, predictably, with tidal waves of witty comparisons and polarized opinions. Upon the building’s official opening last Monday, Australia’s Governor General Sir Peter Cosgrove called the building “the most beautiful squashed brown paper bag I’ve ever seen.”

Meanwhile, Miranda Devine, journalist for The Daily Telegraph — and a former architecture student — was somewhat less complimentary, likening the distorted forms to “Escher on acid” and, worse still, a “poor man’s imitation Gaudí, without the wit.” Add To Collection Save this image to a collection Via BBC. Cloud-Irons: 6 Buildings That Emphasize the Elevated Horizontal Plane. In the 1920s El Lissitzky developed and proposed the idea of horizontal skyscapers — Wolkenbügels, or "cloud-irons" — eight structures intended for the Boulevard Ring in Moscow.

His logic was that as long as humans could not fly, moving horizontally was natural, and moving vertically was not. In an area where there is not significant land for building, he preferred a plane created in the air at medium altitude instead of an American-style towers. Because of the gap between Lissitzsky’s idea and the existing architecture, it wasn’t until the 1940s that the Wolkenbügels were planned and built.

Humans still cannot fly, and many “cloud-irons” now exist on the horizontal plane. Add To Collection Save this image to a collection Wolkenbügels. With that in mind, these are six projects where architects opted for, or at least emphasized, the horizontal as opposed to the vertical: Vanke Center by Steven Holl Architects This building is equal in length to the height of the Empire State Building. Winning Ways: 7 Secrets To Success In Architectural Design Competitions. The debate over whether architectural competitions are a worthwhile endeavor for young practices has been raging for a number of years: Modative blogger Derek Leavitt wrote a provocative piece in 2010 lamenting the folly of open ideas competitions, which spurred Archdaily’s Karen Cliento to compose a spirited counter-argument.

Despite the debate, one thing is for sure—if your practice is participating in a design competition, you want to give yourself the best possible chance of coming out on top. Here are a few ways to maximize the effectiveness of your entry. Add To Collection Save this image to a collection Image via Bustler. Bionic Tower by LAVA - Laboratory for Visionary Architecture. © LAVA - Laboratory for Visionary Architecture Project images Designer's statement The tower proposes a naturally occurring system of structural organization that generates a building embodying efficiencies found within natural structures and architecture.

The proposed façade also envisions an intelligent automation of surface to address pragmatic issues such as ventilation, solar access and water collection. Sand Babel: Solar-Powered 3D Printed Tower- eVolo. Honorable Mention 2014 Skyscraper Competition Qiu Song, Kang Pengfei, Bai Ying, Ren Nuoya, Guo Shen China. The Mobius Strip Gives Form To A Buddhist Temple In Shanghai [Q&A With Designer Wang Qing] If you conjure images of the spiral shape in architecture, two famous structures will likely come to mind. Publications. Hy-Fi, The Organic Mushroom-Brick Tower Opens At MoMA’s PS1 Courtyard. Last night, the organic brick structure known as ‘Hy-Fi‘ opened in the courtyard of MoMA’s PS1 space in New York. Designed by David Benjamin of New York architects The Living, the tower was designed as part of MoMA’s Young Architects Program, and its construction centers around the use of an innovative building material: organic, biodegradable bricks consisting of no more than farm waste and a culture of fungus that is grown to fit a brick-shaped mold.

Acting as the centerpiece for MoMA‘s Warm Up music festival on Saturdays throughout the Summer, the temporary structure will provide shade, seating and water until September 7th. J. MAYER H.    ARCHITECTURE DESIGN RESEARCH. 14 Architects to Receive 2015 AIA Young Architects Award. The American Institute of Architects (AIA) has selected 14 recipients for the 2015 AIA Young Architects Award. Top 10 Projects 2014. Architects Gone Rogue! How To Use Your Skills From Architecture School Anywhere. Linda Bennett is a writer, designer and architect located Melbourne, Australia. Archi-Ninja. Light Fixtures and Layout. Light fixtures ("Luminaires") are the hardware required to hold and operate artificial light sources; the layout of light fixtures is their arrangement in the room.

The 9 Most Controversial Buildings of All Time. U-R-A to Celebrate Moscow's Visual Legacy in New Subway Station. In Memoriam: Paul Katz, Celebrated Architect and Managing Partner at Kohn Pederson Fox Paul Katz, Managing Partner at Kohn Pedersen Fox Associates since 1984 and an expert on how buildings fit into their infrastructural context, died November 20 at Memorial Sloan-Kettering Hospital in New York. Architects Gone Rogue! How To Use Your Skills From Architecture School Anywhere. 10 Tricks For Winning at Revit. Winning Ways: 7 Secrets To Success In Architectural Design Competitions.