A Small Black A-Frame Cabin With A Wood Interior Was Designed As A Hideout For Two Kids And Their Friends. Walls Of Windows On This Cabin Allow For Views Of The Surrounding Forest. Ortraum Architects builds woodland cabin from cross-laminated timber. Kynttilä by Ortraum Architects is a wooden cabin set on Lake Saimaa in Finland, with a glazed, gabled end that has views of the water. 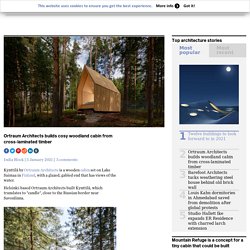 Helsinki-based Ortraum Architects built Kynttilä, which translates to "candle", close to the Russian border near Savonlinna. Kynttilä is made of cross-laminated timber (CLT) and is clad with larch boards on the exterior. The 15-square-metre cabin sits where the Nunnanniemi peninsula juts into the water, so to make the most of the lakeside views there is floor-to-ceiling glazing at one end. The CLT is left exposed on the interior and also forms the built-in furniture, such as a bed, which sits at the one glazed end. A ladder leads up to a bunk bed above the door. Both ends of the cabin have eaves that overhang to provide a sheltered, raised platform for sitting on or storing boots outside. "The space is strongly linked to nature, as the large window creates direct and intimate contact and communication with the surroundings," said Ortraum Architects.

This Tiny House With Corrugated Metal Siding Was Designed For A Writer. New Frontier Tiny Homes has designed the Cornelia Tiny House, aka The Artist’s Muse, as a writing studio, library, and guesthouse, that was commissioned by international bestselling author Cornelia Funke. 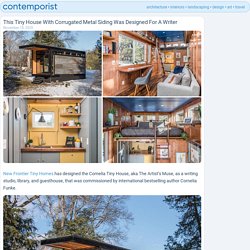 Measuring in at just 256 square feet (23sqm), the tiny house exterior showcases weathered, reclaimed corrugated tin, that’s vertical on one side, horizontal on the other. All of the trim is shou sugi ban cedar, while the cantilever deck and pergola are made from cedar beams and cedar deck boards. Stepping inside, the open space is dedicated to the living room, where you’ll find reclaimed hardwood floors and maple siding with maple batten strips.

The Interior Of This Tiny House Manages To Fit Two Lofted Bedrooms. Fuselage Is A Flat Packed Cabin With A Cozy Interior. Photography by Nasets Marcusgard British company Tree Tents has created Fuselage, a contemporary take on the traditional off-grid woodland cabin, that they designed to be flat-packed. 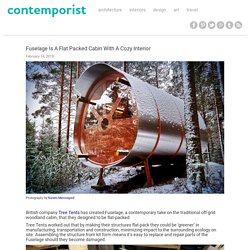 Tree Tents worked out that by making their structures flat-pack they could be ‘greener’ in manufacturing, transportation and construction, minimizing impact to the surrounding ecology on site. Assembling the structure from kit form means it’s easy to replace and repair parts of the Fuselage should they become damaged. These Egg-Shaped Wood Cabins Sit On Top Of A Mountain Overlooking Hammerfest, Norway. Photography by Tor Even Mathisen SPINN Arkitekter together with Format Engineers and the Norwegian Trekking Association, have recently completed a series of daytrip cabins near Hammerfest, Norway. 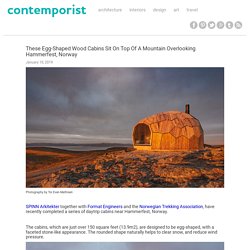 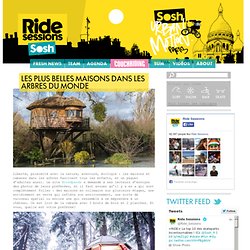 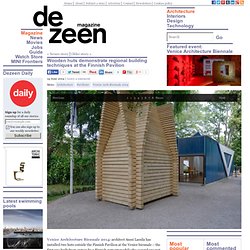 Entitled The Resilience of Architecture, the exhibition explores the relationship between materials and architectural form. It was curated by Juulia Kauste, director of the Museum of Finnish Architecture, and Ole Bouman, creative director of the fifth Shenzhen & Hong Kong Bi-City Biennale of Urbanism/Architecture. Kauste and Bouman challenged architect Anssi Lassila to develop a design for a primitive hut that would be realised using traditional Finnish materials and building techniques. The design was then adapted to suit regional construction in China. "It goes through a process of cultural translation," Bouman told Dezeen. Dartmoor Treehouse by Jerry Tate Architects. Free Tree Houses book competition. Competition: Dezeen and publisher Taschen have teamed up to give away three copies of a book containing 50 remarkable treehouses. 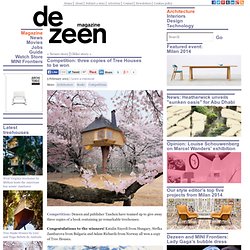 Congratulations to the winners! Katalin Enyedi from Hungary, Stefka Zambarova from Bulgaria and Adam Richards from Norway all won a copy of Tree Houses. The Cocoon by AA Design & Make. Students from London's Architectural Association have suspended a giant wooden cocoon between the trees of Hooke Park in Dorset, England (+ slideshow). 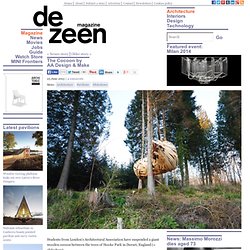 The wooden structure, designed and built by four students on the AA Design & Make programme, was envisioned as a quiet woodland retreat where an inhabitant can sit and watch the sun set beneath the surrounding tree canopy. "The Cocoon represents a journey through the forest, inviting and challenging the visitor to anticipate, imagine, explore and discover the natural beauty of the forest from a completely different perspective," says the design team. Using four untreated sheets of plywood and one locally milled cedar tree, the students constructed a temporary frame and then used a bandaging technique to build up a facade of thin and flexible layers inside it.

Once the structure was stiff enough, it was suspended around three trees so that it appears to weave between them. Photographs are by Hugo G. AA Hooke Park – Cocoon. Awesome Tree Bed. Hush felt pod by Freyja Sewell. Clerkenwell Design Week 2013: British designer Freyja Sewell's felt cocoons have gone into production and were on show in a Victorian former prison in London this week (+ movie). 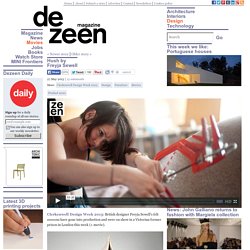 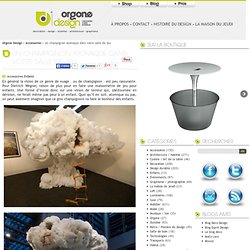