ONSITE SHACKS 'FOR SALE' - AUSTRALIA WIDE - Aussie Shacks Australia Wide. Tiny Houses Australia - The Upcyclist. Tiny Abode – Bec and Reece are great, without any building experience or anyone to tell them what to do they have turned out a really nice abode.Tiny Aussie Homes – A Queensland example of a tiny house with plenty of information and experience to share.Milkwood Permaculture – A great example of an owner built tiny house, on foundations and for a young family.Holly Burton Farm – I think Rob was building tiny houses before they even called them tiny houses.Murrey Barker’s Backyard Bungalows – A backyard shed conversion done well. 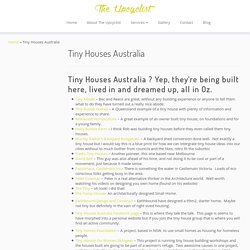 Not exactly a tiny house but i would say this is a blue print for how we can intergrate tiny house ideas into our cities without to much bother from councils and the likes, retro fit the suburbs! This is just the few I have come across, I would love to grow this page, so if you are building a tiny house or know of any Australian tiny house projects, hit me up and I will add them to the list. Worst of McMansions — McMansions 101: What Makes a McMansion Bad... I get a lot of emails these days, (a good thing!) 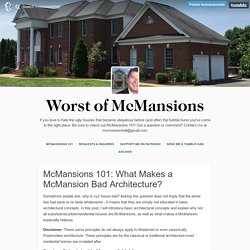 And a lot of them involve people sending me links to houses (or pictures of their own) asking me whether or not the house in question is or is not a McMansion. This post aims to explain the important differences between the two. Part Two will make examples of specific houses (including houses that teeter on the line between mansion and McMansion) and explain why they are one vs the other. For the purpose of clarity, I have omitted modernist and postmodernist houses from this guide. That’s a whole different can of worms that I’ll eventually address in its own post. First off, Treetop Tiny Houses with Private Skatepark. On March 10, 2015 If you absolutely love tiny houses, tree houses, cabins, forts, and skateboarding or BMX’ing then you’re in for a real treat right now because here are a couple of tiny houses up in the tree tops with a personal skatepark right on the property. 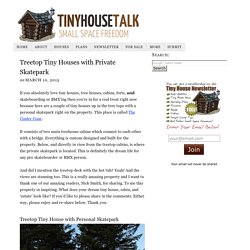 This place is called The Cinder Cone. It consists of two main treehouse cabins which connect to each other with a bridge. Everything is custom designed and built for the property. Below, and directly in view from the treetop cabins, is where the private skatepark is located. And did I mention the treetop deck with the hot tub?

Images © The Cinder Cone. Refugio Pangal, a modern cabin in Chile by EMa. This small cabin sits on an arid hillside in Casablanca, a grape growing region of central Chile about an hour’s drive northwest of Santiago. 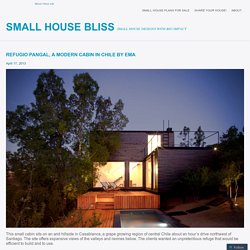 The site offers expansive views of the valleys and ravines below. The clients wanted an unpretentious refuge that would be efficient to build and to use. Architects Etcheberrigaray+Matuschka Arquitectos (EMa) split the 60 m2 (646 ft2) cabin into two rectangular blocks, a tall volume for the living space and a smaller bedroom wing. 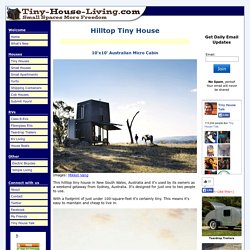 It's designed for just one to two people to use. With a footprint of just under 100-square-feet it's certainly tiny. This means it's easy to maintain and cheap to live in. The only way you can get to it is actually by horseback where you get to enjoy miles and miles of beautiful panoramic views of nature. Weekend Cabin: Treehouse Living. The rest of the world is catching up to what you’ve know for a long time: Treehouses aren’t just for kids any more. 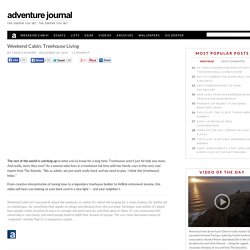 And really, were they ever? As a woman who lives in a treehouse full time with her family says in this very cool report from The Atlantic, “We as adults, we just work really hard, and we need to play. I think this [treehouse] helps.” These 32 Tree Houses Are More Whimsical Than Your Wildest Dreams And They Actually EXIST! Caban Crwn. Cabins. Weekend Cabin: Tintaldra Cabin, Victoria, Australia. For the simplicity of the structure, there is something fantastical about the Tintaldra Cabin. 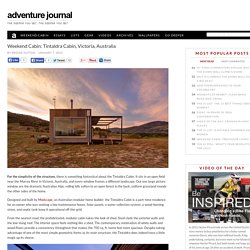 It sits in an open field near the Murray River in Victoria, Australia, and every window frames a different landscape. Out one large picture window are the dramatic Australian Alps; rolling hills soften to an open forest in the back; uniform grassland rounds the other sides of the home. Designed and built by Modscape, an Australian modular home builder, the Tintaldra Cabin is a part-time residence for an owner who was seeking a low maintenance house.

Solar panels, a water collection system, a wood-burning stove, and septic tank keep it operational off-the-grid. From the nearest road, the prefabricated, modular cabin takes the look of shed. Photos courtesy of Modscape. Weekend Cabin isn’t necessarily about the weekend, or cabins. Tiny Mushroom Dome Cabin in Aptos. This tiny house is one of a kind. 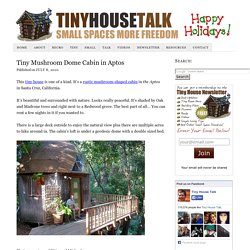 It’s a rustic mushroom-shaped cabin in the Aptos in Santa Cruz, California. It’s beautiful and surrounded with nature. Looks really peaceful. You'd Never Live Here Because It's Too Small, Right? Step Inside... Yep. Thought So - Ice Trend. This compact home has perfect views and everything you need for a relaxing vacation. 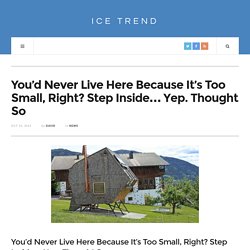 Would you visit a place like this?! At first, this house looks abnormally small. And once you step inside you’ll realize it might be small but it is seriously awesome. It was originally built as a family vacation home, but anyone can rent it out year round. Crosson, Clarke, Carnachan Architects. The Hut on Sleds On the shore of an idyllic white sanded beach in New Zealand's Coromandel Peninsula rests an elegant hut. Closed up, the rough macrocarpa-cladding blends into the landscape and perches quietly on the dunes, as passersby wonder how it could possibly function for a family of five. Designed to close up against the elements, the hut measures a mere 40 square metres and rests on two thick wooden sleds that allow it to be shifted around the beach front section. This innovative portability is a response to the ever changing landscape that line the beachfront in this coastal erosion zone. Within the hut, the ingenuity reveals itself further as no nook or cranny is overlooked.