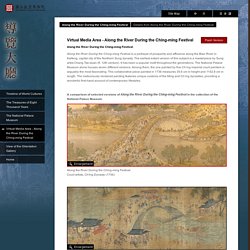 The earliest extant version of this subject is a masterpiece by Sung artist Chang Tse-duan (fl. 12th century). It has been a popular motif throughout the generations. The National Palace Museum alone houses seven different versions. Among them, the one painted by five Ch’ing imperial court painters is arguably the most fascinating. This collaborative piece painted in 1736 measures 35.6 cm in height and 1152.8 cm in length. China Heritage Quarterly. Throughout October 2005, the Palace Museum in Beijing exhibited Qingming shanghe tu, undoubtedly the best known ancient painting in the museum's collection, as a part of activities commemorating the 80th anniversary of the museum's founding. 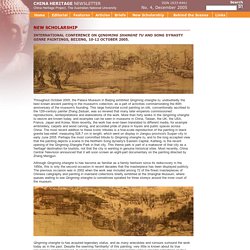 This large horizontal scroll painting on silk, conventionally ascribed to the 12th-century painter Zhang Zeduan, was so revered that many later emperors commissioned reproductions, reinterpretations and elaborations of the work. More than forty works in the Qingming shanghe tu oeuvre are known today, and examples can be seen in museums in China, Taiwan, the UK, the USA, France, Japan and Korea. More recently, the work has even been translated to different media, for example embroidery, carpets and wood carving, and accorded pride of place in foyers and public spaces across China. Teachartwiki - Qing Ming Shanghe Tu. Qing Ming Shanghe Tu by Zhang Zeduan Title: Along the River During Qingming Festival Artist: Zhang Zeduan Time: 12th century original Materials: Ink and colors on silk. 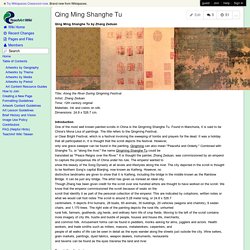 Dimensions: 24.8 x 528.7 cm.Introduction One of the most well known painted scrolls in China is the Qingming Shanghe Tu. Found in Manchuria, it is said to be China’s Mona Lisa of paintings. 導覽大廳：情境區－清明上河圖 Virtual Media Area: Along the River During the Ching-ming Festival. Hansen Beijing Qingming Scroll. The Beijing Qingming Scroll. 高清版《清明上河圖》 River of Wisdom. Scrolls. [央視]11.04.05.國寶檔案_清明上河圖話清明.rmvb. URBAN LIFE. The images in this section come from a single handscroll, The Spring Festival Along the River, by Zhang Zeduan. 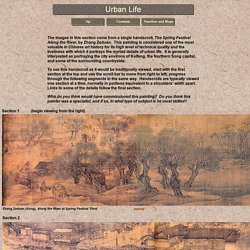 This painting is considered one of the most valuable in Chinese art history for its high level of technical quality and the liveliness with which it portrays the myriad details of urban life. It is generally interpreted as portraying the city environs of Kaifeng, the Northern Song capital, and some of the surrounding countryside. To see this handscroll as it would be traditionally viewed, start with the first section at the top and use the scroll bar to move from right to left; progress through the following segments in the same way.

Handscrolls are typically viewed one section at a time, normally in portions equivalent to a shoulders' width apart. Links to some of the details follow the final section. Who do you think would have commissioned this painting? Qingming Scroll Interactive Map Module. China Learning Initiatives. By Heather Clydesdale A loose and fun American film from the late 1980s causes pangs of longing in the hearts of teachers. 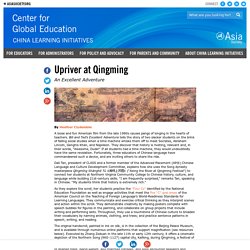 Bill and Ted’s Excellent Adventure tells the story of two slacker students on the brink of failing social studies when a time machine whisks them off to meet Socrates, Abraham Lincoln, Genghis Khan, and Napoleon. They discover that history is riveting, relevant and, in their words, “Awesome, Dude!” If all students had a time machine, they would undoubtedly have the same revelation.

Fortunately, three educators of Chinese language have commandeered such a device, and are inviting others to share the ride. As they explore the scroll, her students practice the “Four Cs” identified by the National Education Foundation as well as engage activities that meet the five "C" goal areas of the American Council on the Teaching of Foreign Language’s World-Readiness Standards for Learning Languages. Along the River During the Qingming Festival. Along the River During the Qingming Festival (simplified Chinese: 清明上河图; traditional Chinese: 清明上河圖; pinyin: Qīngmíng Shànghé Tú) is a painting by the Song dynasty artist Zhang Zeduan (1085–1145). 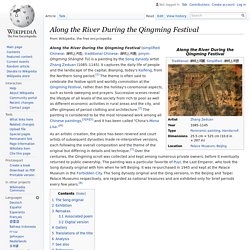 It captures the daily life of people and the landscape of the capital, Bianjing, today's Kaifeng, from the Northern Song period.[1] The theme is often said to celebrate the festive spirit and worldly commotion at the Qingming Festival, rather than the holiday's ceremonial aspects, such as tomb sweeping and prayers. Successive scenes reveal the lifestyle of all levels of the society from rich to poor as well as different economic activities in rural areas and the city, and offer glimpses of period clothing and architecture.[2] The painting is considered to be the most renowned work among all Chinese paintings,[3][4][5] and it has been called "China's Mona Lisa.