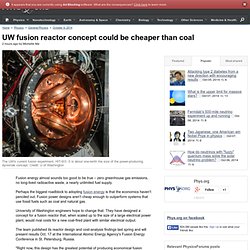 Perhaps the biggest roadblock to adopting fusion energy is that the economics haven't penciled out. Fusion power designs aren't cheap enough to outperform systems that use fossil fuels such as coal and natural gas. University of Washington engineers hope to change that. They have designed a concept for a fusion reactor that, when scaled up to the size of a large electrical power plant, would rival costs for a new coal-fired plant with similar electrical output. The team published its reactor design and cost-analysis findings last spring and will present results Oct. 17 at the International Atomic Energy Agency's Fusion Energy Conference in St.

NREL Maps U.S. Renewable Energy Potential. Crow Lake Wind Farm, image courtesy Electric Co-op Today Zoomable and draggable like a Google map , with potentially prime locations for various clean energy technologies delineated in gradations of color, the newest offering from the U.S. Department of Energy's (DOE’s) National Renewable Energy Laboratory ( NREL ) allows everyone from renewable resource enthusiasts to project developers to quickly, accurately and effectively locate the best places for particular types of clean energy development. Not only does the map identify prime locations for every clean energy technology from hydro through wave power – including ground-source and enhanced geothermal, biomass residue (such as corn husks, prairie grasses), solar photovoltaic (PV) and concentrating solar (CSP), and onshore and offshore wind – but it does so by address, city, state, zip code, or latitude and longitude, or within states, counties, congressional districts, U.S.

How Steve Perlman's "Revolutionary" Wireless Technology Works - and Why its a Bigger Deal than Anyone Realizes. Smart Forecasts Lower the Power of Wind and Solar. Breakthrough Ultra-accurate ­forecasting of wind and solar power. 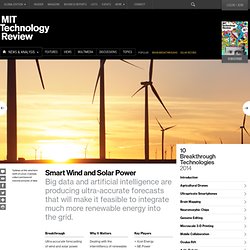 Why It Matters Dealing with the intermittency of renewable energy will be crucial for its expansion. Key Players Xcel Energy GE Power National Center for Atmospheric Research Wind power is booming on the open plains of eastern Colorado. Bionic plants: Nanotechnology could turn shrubbery into supercharged energy producers. Plants have many valuable functions: They provide food and fuel, release the oxygen that we breathe, and add beauty to our surroundings. 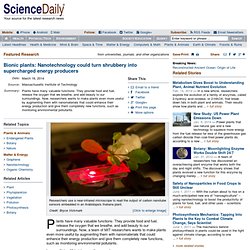 Now, a team of MIT researchers wants to make plants even more useful by augmenting them with nanomaterials that could enhance their energy production and give them completely new functions, such as monitoring environmental pollutants. In a new Nature Materials paper, the researchers report boosting plants' ability to capture light energy by 30 percent by embedding carbon nanotubes in the chloroplast, the plant organelle where photosynthesis takes place. Using another type of carbon nanotube, they also modified plants to detect the gas nitric oxide.

Together, these represent the first steps in launching a scientific field the researchers have dubbed "plant nanobionics. " Scientists find the 'missing heat' of global warming 700 meters below the sea. Total ocean heat content shown in violet, while grey shows 0 to 300 meters and blue shows 300 to 700 meters. 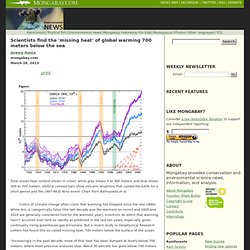 Vertical colored bars show volcanic eruptions that cooled the Earth for a short period and the 1997-98 El Nino event. Chart from Balmaseda et al. Critics of climate change often claim that warming has stopped since the late 1990s. While this is categorically false (the last decade was the warmest on record and 2005 and 2010 are generally considered tied for the warmest year), scientists do admit that warming hasn't occurred over land as rapidly as predicted in the last ten years, especially given continually rising greenhouse gas emissions.

But a recent study in Geophysical Research Letters has found this so-called missing heat: 700 meters below the surface of the ocean. "Increasingly in the past decade, more of that heat has been dumped at levels below 700 meters, where most previous analyses stop. Solar Beads Could Cut Costs By 50% Allan Savory: How to green the world's deserts and reverse climate change. The Most Amazing Invention. Evidence Meltdown. The green movement has misled the world about the dangers of radiation. 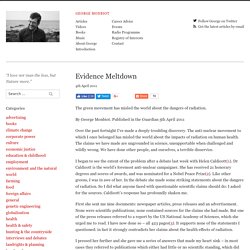 By George Monbiot. Published in the Guardian 5th April 2011 Over the past fortnight I’ve made a deeply troubling discovery. The anti-nuclear movement to which I once belonged has misled the world about the impacts of radiation on human health. Super-efficient solar-energy technology: ‘Solar steam’ so effective it can make steam from icy cold water. Rice University scientists have unveiled a revolutionary new technology that uses nanoparticles to convert solar energy directly into steam. 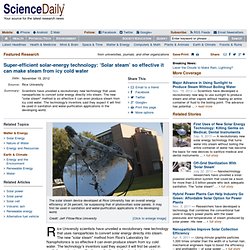 Details of the solar steam method were published online November 19 in ACS Nano. "This is about a lot more than electricity," said LANP Director Naomi Halas, the lead scientist on the project. 'Major discovery' from MIT primed to unleash solar revolution. Nitrogen cycle: Difference Engine: End of the electric car? One step closer to controlling nuclear fusion. Using a heating system, physicists have succeeded for the first time in preventing the development of instabilities in an efficient alternative way relevant to a future nuclear fusion reactor. 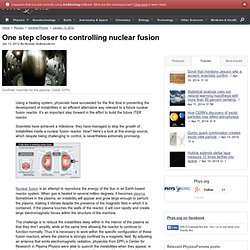 It’s an important step forward in the effort to build the future ITER reactor. Scientists have achieved a milestone: they have managed to stop the growth of instabilities inside a nuclear fusion reactor. How? Researchers harness viruses to split water: Crucial step toward turning water into hydrogen fuel. (PhysOrg.com) -- A team of MIT researchers has found a novel way to mimic the process by which plants use the power of sunlight to split water and make chemical fuel to power their growth. 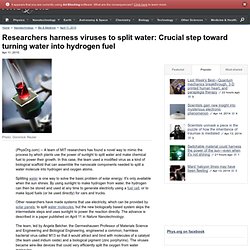 In this case, the team used a modified virus as a kind of biological scaffold that can assemble the nanoscale components needed to split a water molecule into hydrogen and oxygen atoms. Splitting water is one way to solve the basic problem of solar energy: It's only available when the sun shines. By using sunlight to make hydrogen from water, the hydrogen can then be stored and used at any time to generate electricity using a fuel cell, or to make liquid fuels (or be used directly) for cars and trucks. Other researchers have made systems that use electricity, which can be provided by solar panels, to split water molecules, but the new biologically based system skips the intermediate steps and uses sunlight to power the reaction directly.

Sun-Less Solar Cells Could Make Energy From Anything Hot. Photovoltaic cells are best known for turning sunlight into electrical power--and they're big business. 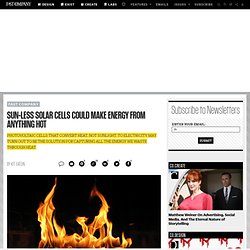 But did you know that there's a type of PV cell that eats heat instead of light to make power? It could replace the Li-ion battery in your cell phone, and it may also be used to scavenge waste heat from almost anything that normally dumps it into the environment, from your TV's electronics to your car's engine (even an electrical one). Thermal PV tech has been around ages, and works the same way as the solar variation: Incoming radiation excites the atoms in its semiconductor structure, which then push electrons out--generating current.

And much as is the case for solar PV cells, the advances in the tech have all been about improving their efficiency. Top-secret Zero-emission Bloom Box Revealed (Kind of) The world can be powered by alternative energy, using today's technology, in 20-40 years, says Stanford researcher Mark Z. Jacobson. January 26, 2011 A new study – co-authored by Stanford researcher Mark Z. 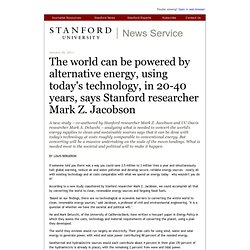 Jacobson and UC-Davis researcher Mark A. Delucchi – analyzing what is needed to convert the world's energy supplies to clean and sustainable sources says that it can be done with today's technology at costs roughly comparable to conventional energy. But converting will be a massive undertaking on the scale of the moon landings. A Thorium documentary. Why we are poles apart on climate change. Understandably anxious to explain persistent controversy over climate change, the media have discovered a new culprit: the public. Accusations that climate science is money-driven reveal ignorance of how science is done. One of the unfortunate memes that has made repeated appearances in the climate debate is that money isn't just influencing the public debate about science, but it's also influencing the science itself. The government, the argument goes, is paying scientists specifically to demonstrate that carbon dioxide is the major culprit in recent climate change, and the money available to do so is exploding.

Although the argument displays a profound misunderstanding of how science and science funding work, it's just not going away. Just this week, one of the sites where people congregate to criticize mainstream climate science once again repeated it, replete with the graph below. Scientists see the solar future, and it's all about 'nanodomes' and 'plasmonics' Images courtesy of Michael McGehee Acting like a waffle iron, silicon nanodomes, each about 300 nanometers in diameter and 200 nanometers tall, imprint a honeycomb pattern of nanoscale dimples into a layer of metal within the solar cell.

Titania within the solar cell is imprinted by the silicon nanodomes like a waffle imprinted by the iron. Researchers in solar energy speak of a day when millions of otherwise fallow square meters of sun-drenched roofs, windows, deserts and even clothing will be integrated with inexpensive solar cells that are many times thinner and lighter than the bulky rooftop panels familiar today. Wave Power Desalination Plant Coming Soon to Texas. PM: How does your wave-powered system work? Mark Thomas: The Seadog Pump is essentially a mechanical conversion device. What we're doing is taking the energy resonant in the waves by having it flow through our device. Malcolm Bull reviews ‘A Perfect Moral Storm’ by Stephen Gardiner · LRB 24 May 2012.

For the benefit of anyone who has spent the past decade or so on a different planet, the most frequently asked questions about climate change on this one are as follows. What_if_solar_was_subsidized_like_fossil_fuels.jpg (JPEG Image, 550 × 1117 pixels) - Scaled (81. Secrets of the first practical artificial leaf. A detailed description of development of the first practical artificial leaf -- a milestone in the drive for sustainable energy that mimics the process, photosynthesis, that green plants use to convert water and sunlight into energy -- appears in the ACS journal Accounts of Chemical Research.

The article notes that unlike earlier devices, which used costly ingredients, the new device is made from inexpensive materials and employs low-cost engineering and manufacturing processes. Daniel G. Can Geoengineering Solve Global Warming? Late in the afternoon on April 2, 1991, Mt. A new twist that may cut CO2 levels back to pre-industrial levels. Waterworld? Ball of dust, more like - all the water on, in and under the Earth would fit into one 860-mile wide bubble. Limitless clean energy from wastewater? Nah, let's stick with clean coal. I’ve written here before about the extraordinary obstacles to change created by the endowment effect — our tendency to place enormous value on those things (and energy systems) we already have all out of proportion to their actual worth, to fear irrationally for the loss of what we have, and to undervalue what could be gained by using something else.

One particularly bothersome aspect of the endowment effect is its unequal distribution: we tend to be especially deeply invested in certain pieces of the status quo, no matter how woefully inefficient or laden with negative side effects. A New Approach to Fusion. General Fusion, a startup in Vancouver, Canada, says it can build a prototype fusion power plant within the next decade and do it for less than a billion dollars. So far, it has raised $13.5 million from public and private investors to help kick-start its ambitious effort. Nanowire battery can hold 10 times the charge of existing lithium-ion battery.

The discovery, described in a study published today (Thursday, Feb. 15) in Science Express, an electronic publication of the journal Science, is a milestone in the quest for efficient ways to directly convert heat into electricity. Molten Salt And Rocket Science To Make Solar Work At Night. Solar power: works great when the sun is out. Scientists Discover New Way to Generate Electricity. MIT researchers engineer viruses to split water in search of hydrogen. Hydrogen: Energy Unbound. Amory Lovins on winning the oil endgame. TED Talk on Liquid Thorium Fluoride Reactors. Yes, I'm advocating this kind of nuclear power.