React js en español - tutorial básico, primeros pasos y ejemplos. Build a Twitter Like Search Feed with React.js and appbase.io. This is Part — II of a series on building Twitter like live search feeds with different Javascript frameworks. You can check out the Part-I published on scotch.io where we used jQuery. Ever tried Twitter Live Search and wondered how it works? On the surface, you search for a #hashtag or a keyword and Twitter shows you a live feed of results, with new tweets appearing continuously after the initial search results were rendered completely! 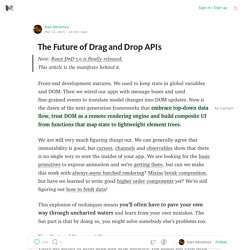 Front-end development matures. We used to keep state in global variables and DOM. Then we wired our apps with message buses and used fine-grained events to translate model changes into DOM updates. Now is the dawn of the next-generation frameworks that embrace top-down data flow, treat DOM as a remote rendering engine and build composite UI from functions that map state to lightweight element trees. We are still very much figuring things out. This explosion of techniques means you’ll often have to pave your own way through uncharted waters and learn from your own mistakes. The State of Drag and Drop There are plenty of great drag and drop libraries. Before I started working on React DnD, I researched every drag and drop library on the first several pages of Google Search results. They are usually written in the “jQuery plugin” mindset and mutate the DOM directly. Render() {

Learning React.js: Getting Started and Concepts. Introduction Today we are going to kick off the first installment in a new series of tutorials, Learning React, that will focus on becoming proficient and effective with Facebook's React library. 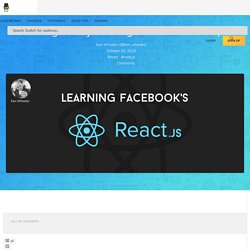 Before we start building anything meaningful, its important that we cover some base concepts first, so lets get this party started. Tutorial. We'll be building a simple but realistic comments box that you can drop into a blog, a basic version of the realtime comments offered by Disqus, LiveFyre or Facebook comments. 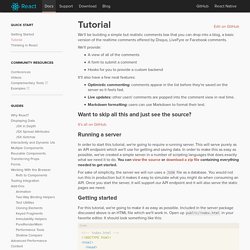 We'll provide: A view of all of the commentsA form to submit a commentHooks for you to provide a custom backend It'll also have a few neat features: Optimistic commenting: comments appear in the list before they're saved on the server so it feels fast.Live updates: other users' comments are popped into the comment view in real time.Markdown formatting: users can use Markdown to format their text. Want to skip all this and just see the source? Build A Real-Time Twitter Stream with Node and React.js. Introduction Welcome to the second installation of Learning React, a series of articles focused on becoming proficient and effective with Facebook's React library. 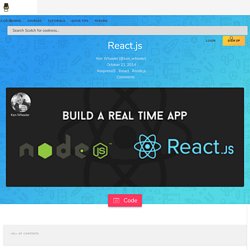 If you haven't read the first installation, Getting Started and Concepts, it is highly recommended that you do so before proceeding. Today we are going to build an application in React using Isomorphic Javascript. Iso-what? React.js Fundamentals: The best place to become familiar with React.js and the React.js Ecosystem. The modularity of the React ecosystem is extremely powerful for building applications. 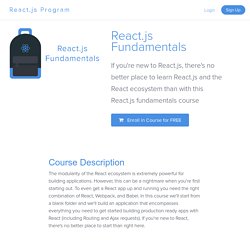 However, this can be a nightmare when you're first starting out. To even get a React app up and running you need the right combination of React, Webpack, and Babel. In this course we'll start from a blank folder and we'll build an application that encompasses everything you need to get started building production ready apps with React (including Routing and Ajax requests). If you're new to React, there's no better place to start than right here. This course is made up of 12 lessons. As you can probably tell by now, I'm really big into hands on learning.

A solid understanding of JavaScript will help but isn't entirely required (you might have to do some extra research though). If you have any questions, suggestions, or just want to say thanks, you can find me on Twitter at @tylermcginnis33 @tylermcginnis33 I just finished your #reactjs fundamentals course. ReactJS Tutorial: Call monitoring with React, Express and Socket.io. I’ve been having a lot of fun messing around with React lately. 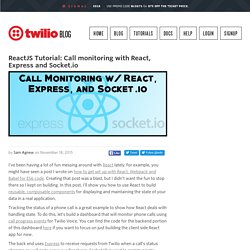 For example, you might have seen a post I wrote on how to get set up with React, Webpack and Babel for ES6 code. Creating that post was a blast, but I didn’t want the fun to stop there so I kept on building. In this post, I’ll show you how to use React to build reusable, composable components for displaying and maintaining the state of your data in a real application. Tracking the status of a phone call is a great example to show how React deals with handling state. To do this, let’s build a dashboard that will monitor phone calls using call progress events for Twilio Voice. The back end uses Express to receive requests from Twilio when a call’s status changes as well as to serve our React app.

If you want to learn how the back end was built step by step you can check out these resources: Getting ready to pick up the phone. Thinking in React. Edit on GitHub React is, in our opinion, the premier way to build big, fast Web apps with JavaScript. 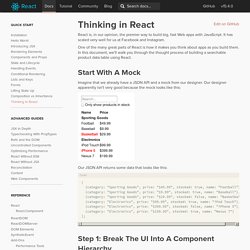 It has scaled very well for us at Facebook and Instagram. One of the many great parts of React is how it makes you think about apps as you build them. In this document, we'll walk you through the thought process of building a searchable product data table using React. Start With A Mock # Imagine that we already have a JSON API and a mock from our designer. Our JSON API returns some data that looks like this: Step 1: Break The UI Into A Component Hierarchy # The first thing you'll want to do is to draw boxes around every component (and subcomponent) in the mock and give them all names.

But how do you know what should be its own component? Since you're often displaying a JSON data model to a user, you'll find that if your model was built correctly, your UI (and therefore your component structure) will map nicely. James K Nelson (@james_k_nelson) Dan Abramov (@dan_abramov) Data Persistence and Sessions With React - Envato Tuts+ Code Tutorial. No JSX, no Flux, no ES6, no Webpack. Disclaimer: I love JSX, Flux, ES6 and Webpack. 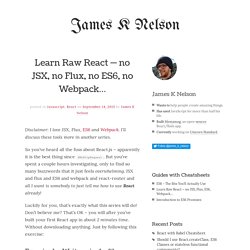 I’ll discuss these tools more in another series. So you’ve heard all the fuss about React.js – apparently it is the best thing since XMLHttpRequest. But you’ve spent a couple hours investigating, only to find so many buzzwords that it just feels overwhelming. JSX and flux and ES6 and webpack and react-router and all I want is somebody to just tell me how to use React already! Luckily for you, that’s exactly what this series will do!

Orchestrate. Key/Values in Orchestrate are how you store most data. 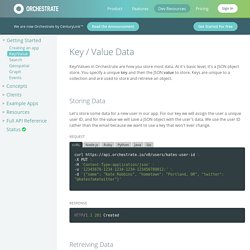 At it's basic level, it's a JSON object store. You specify a unique key and then the JSON value to store. Keys are unique to a collection and are used to store and retreive an object. Storing Data Let's store some data for a new user in our app.