660.808 BTC-e BTC/USD - BitcoinWisdom. Greece On The Verge? Military Special Forces Have 15 Demands... Or Else. Greek government authorities are on alert after a union of Greek army reservists of Special Forces issued a statement urging the Greek administration to step down and make way for a national unity government. 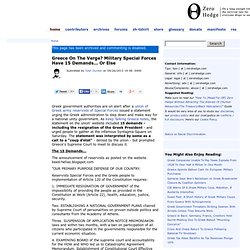 As Keep Talking Greece notes, the statement on the union' website included 15 demands - including the resignation of the Greek President - and urged people to gather at the infamous Syntagma Square on Saturday. The statement was interpreted by some as a call to a "coup d'etat" - denied by the union - but prompted Greece's Supreme Court to meet to discuss it. The 15 Demands... How to overthrow the Illuminati. Www.taxjustice.net/cms/upload/pdf/The_Price_of_Offshore_Revisited_Presser_120722.pdf. 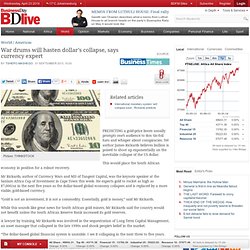 Yet author James Rickards believes bullion is poised to shoot up exponentially on the inevitable collapse of the US dollar. This would place the South African economy in position for a robust recovery. 2012 - International Year of Cooperatives. "Through their distinctive focus on values, cooperatives have proven themselves a resilient and viable business model that can prosper even during difficult times. 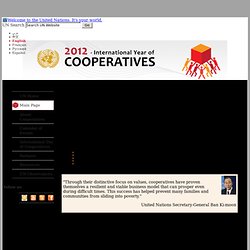 This success has helped prevent many families and communities from sliding into poverty. " United Nations Secretary-General Ban Ki-moon The United Nations General Assembly has declared 2012 as the International Year of Cooperatives, highlighting the contribution of cooperatives to socio-economic development, particularly their impact on poverty reduction, employment generation and social integration. Redirecting. The 5 Biggest Obscenities of Capitalism Today. July 14, 2013 | 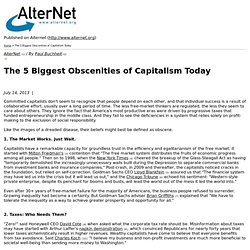 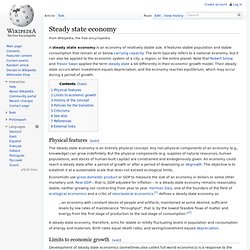 It features stable population and stable consumption that remain at or below carrying capacity. The term typically refers to a national economy, but it can also be applied to the economic system of a city, a region, or the entire planet. Note that Robert Solow and Trevor Swan applied the term steady state a bit differently in their economic growth model. Their steady state occurs when investment equals depreciation, and the economy reaches equilibrium, which may occur during a period of growth. Physical features[edit] The steady state economy is an entirely physical concept. Economists use gross domestic product or GDP to measure the size of an economy in dollars or some other monetary unit. A steady state economy, therefore, aims for stable or mildly fluctuating levels in population and consumption of energy and materials. Limits to economic growth[edit] History of the concept[edit] Let's make everything FREE! An introduction to The Free World Charter.

The End of Bigger. The Start Of Better. Economists sound warning over carbon tax. South Africa's high dependency on fossil fuel-powered energy has earned it a place among the top 20 carbon emitting countries in the world. 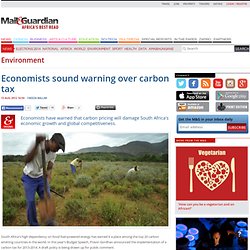 In this year's Budget Speech, Pravin Gordhan announced the implementation of a carbon tax for 2013-2014. A draft policy is being drawn up for public comment. Carbon pricing was the topic under panel discussion at the Mail & Guardian's Critical Thinking Forum on Tuesday, hosted by the M&G and BHP Billiton. Panellists drew a direct link between a carbon tax and rising electricity costs. As Michael Rossouw, executive director of Xstrata Alloys, argued: "We have not learnt to decouple energy growth from carbon usage". Rob Jeffrey, Econometrix managing director, cited a recent study that revealed a carbon tax would reduce GDP by 3% by 2021, a sum that would amount to R88-billion.

Carbon tax "South Africa makes up 1.1% of the world's carbon dioxide emissions," said Jeffrey. The shape of the future carbon tax still hangs in the balance. Commons. Social production as a new source of economic value creation. Image by opensource.com In this short TED video clip, Yochai Benkler provides a useful framing of what he terms “social production.” 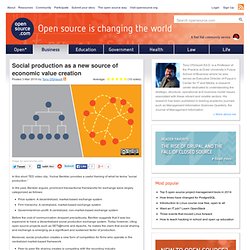 Post-growth: a green republican economy. ‘The most alarming sign of the state of our society now is that our leaders have the courage to sacrifice the lives of young people in war but not the courage to tell us that we must be less greedy and less wasteful.’ 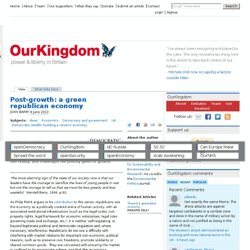 Wendell Berry, 1994, p.92. As Philip Pettit argues in his contribution to this series, republicans see the economy as a politically created arena of human activity, with an associated institutional infrastructure (such as the legal codes, tort, property rights, legal framework for economic enterprises, legal rules governing trade and exchange, etc.). It is neither ‘self-regulating’ or beyond legitimate political and democratic regulation and, where necessary, interference. Republicans do not see a difficulty with interfering with market relations for important non-economic, political reasons, such as to preserve civic freedoms, promote solidarity or shared common goods. Natural limits to growth. The New Approach to Freedom. IMF's epic plan to conjure away debt and dethrone bankers. Major Banks, Governmental Officials and Their Comrade Capitalists Targets of Spire Law Group, LLP's Racketeering and Money Laundering Lawsuit Seeking Return of $43 Trillion to the United States Treasury.

Reinventing Money Thomas H. Greco Jr. Bitcoin - P2P digital currency. Welcome to Truthology. Economics. Growth outlook bleak for SA. Schussler said that, because South Africa's major trading partner, the EU, is under economic stress, some of its members have reduced their imports from this country. 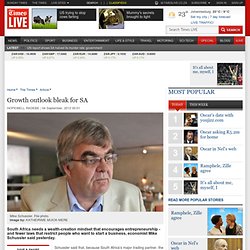 There was little doubt, he said, that the effects of the austerity measures Greece and Spain, among others, were enduring would soon be felt in South Africa. He said creating conditions conducive to entrepreneurship was something the government should do now. In the long term, it should remedy the ailing education system. Those who hope that new markets for their products will open up in China, India, Brazil and Russia should lower their expectations because the Brics members are also facing economic challenges, he said. South Africa - ECONOMY. South Africa - The Economy South Africa TRADING ON JOHANNESBURG'S financial markets reached a new all-time high on April 26, 1994, reflecting the buoyant mood of voters of all races who were about to participate in the country's first democratic elections. 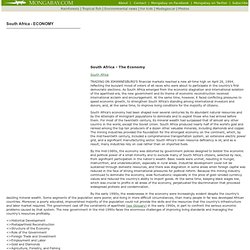 SA weathers storm, but food prices still set to double by 2030. Traditionally the cost of staple foods has gradually inflated over time, and future cost scenarios have taken this approach. But a report released by Oxfam today has factored in the rapid changes in price that come about due to climate-related crop failures. Their most conservative scenarios see food prices doubling by 2030. Half of this increase will be down to changes in average temperatures and rainfall patterns, it said.

The report, Extreme Weather, Extreme Prices, said that for the moment South Africa is secure. While this is a good thing, it leaves the country vulnerable to local crop failures. U.S. Companies Conduct Fire Drills in Case Greece Exits Euro. Global systemic crisis/October 2012 -The global economy sucked into a black hole and world geopolitics heated to white-hot: The seven key factors of an unprecedented double shock.

Fiscal Cliff - Cheat Sheet - Explained in 3D infographics. The new 'Fiscal Cliff deal' dubbed ATRA 2012 makes Bush's Tax cuts permanent for individuals earning less than $400,000/year, for those over it, rates are raised back to 39.6% as it was during Clinton's era. The automatic budget cuts (sequestration) that were agreed during the Debt Ceiling debate of 2011 have been delayed for two months. Obama's temp 2011 Pay-roll tax cuts expired as well, which means $50 less take-home per month for an American earning $30,000/year. The 'Fiscal Year'- used for US Government accounting purposes starts in October, 3 months early of actual calendar year.

Portions of Fiscal Cliff tax increases & budget cuts would be gradual, starting 3 months into FY 2013 and according to Wikipedia projected to result in a 19.63% increase in revenue and 0.25% reduction in spending year-over-year for fiscal year 2013. Henry Ford, When Capitalists Cared. TEN MYTHS ABOUT CAPITALISM. Why resource-rich countries usually end up poor. Photo by Walter Astrada/AFP/Getty Images. Iceland Was Right, We Were Wrong: The IMF. Logic Freaks. Disaster Advertising. Don Tapscott: Does Apple's Secrecy Prove That Openness Doesn't Work?

Mysterious Algorithm Was 4% of Trading Activity Last Week - CNBC.com. ‘Poorest president’ donates 90% of his salary. The Great Recession: Grasping at an understanding of the crisis. Straight Dope: Monopoly's Anti-Capitalist Origins. The World Factbook.