Vanishing glaciers of Everest. At the Royal Society Summer Exhibition, a team of researchers discuss the future of the glaciers found on the world’s highest mountain ‘Most of the glaciers on Everest are covered in debris,’ says Professor Duncan Quincey, a glaciologist at the University of Leeds. 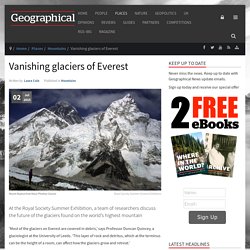 ‘This layer of rock and detritus, which at the terminus can be the height of a room, can affect how the glaciers grow and retreat.’ Since 2003, a collaboration of researchers from the Universities of Aberystwyth, Sheffield and Hertfordshire have been improving data about debris-covered glaciers in the Himalayas. Debris-free (clean ice) glaciers grow forwards and melt backwards seasonally and are generally seeing a net retreat as the climate warms up.

Everest: The Mess at the Top of the World. An hour above Camp IV on the Southeast Ridge of Mount Everest, Panuru Sherpa and I passed the first body. 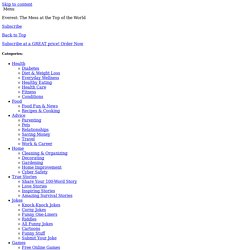 The dead climber was on his side as if napping in the snow, goose down blowing from holes in his insulated pants. Ten minutes later, we stepped around another body, her torso shrouded in a Canadian flag, an abandoned oxygen bottle holding down the flapping fabric. Trudging nose to butt up the ropes that had been fixed to the steep slope, Panuru and I were wedged between strangers above us and below us. The day before, at Camp III, our team had been part of a small group. But when we woke up this morning, we were stunned to see an endless line of climbers passing near our tents. Dr Beck Weathers "Everest" Movie Press Conference. Mount Everest and its geological story - Documentary. Everest Movie vs. True Story of 1996 Mount Everest Disaster. Climbing Mount Everest was the biggest mistake I've ever made in my life. 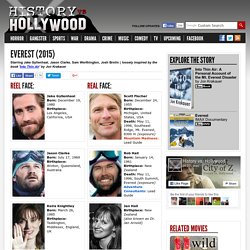 I wish I'd never gone. I suffered for years of PTSD, and still suffer from what happened. I'm glad I wrote a book about it. But, you know, if I could go back and relive my life, I would never have climbed Everest. -Jon Krakauer, HuffPost Live, August 13, 2015 Questioning the Story: Did Rob Hall really call his wife shortly before dying on Everest? Like in the movie, Rob Hall spoke to his wife on his radio via a satellite connection patched through by Helen Wilton from a mountainside campsite roughly 8,000 ft below him. Realizing he was near death, Rob Hall (center right) said goodbye to his wife Jan (center left) from a satellite phone when he was still close to the summit. Climbing MT Everest with a Mountain on My Back The Sherpa's Story BBC full documentary 2013 nepal.

Everest Maxed Out. An hour above high camp on the Southeast Ridge of Everest, Panuru Sherpa and I passed the first body. 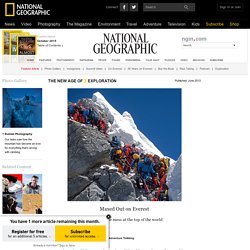 The dead climber was on his side, as if napping in the snow, his head half covered by the hood of his parka, goose down blowing from holes torn in his insulated pants. Ten minutes later we stepped around another body, her torso shrouded in a Canadian flag, an abandoned oxygen bottle holding down the flapping fabric. Trudging nose to butt up the ropes that had been fixed to the steep slope, Panuru and I were wedged between strangers above us and below us. Everest. Khumbu Climbing Center Since it opened in 2003, the Khumbu Climbing Center has attracted more than 700 Nepali students and some of the world's top mountaineers as instructors. 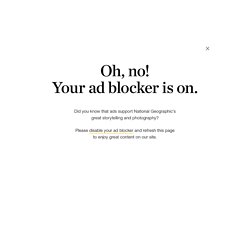 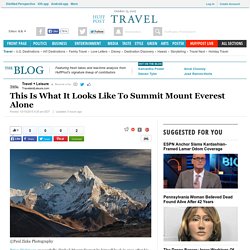 Earlier this week, Twitter announced a brand new way to view content under one topic: Moments. What do these two things have in common? All of the stunning photography Dickinson has been sharing on Twitter is now available in one easy-to-access spot (perfect for a mid-day break!) , despite being posted at different times. Climbing Everest is no simple occasion -- as you can tell from Dickinson's photos. [<a href="//storify.com/travlandleisure/mount-everest" target="_blank">View the story "Photo Spotlight: Mount Everest" on Storify</a>] More from Travel + Leisure:World's Top 10 CitiesThe Best Places to Travel in 2015Best Walking Shoes For TravelWorld's Top 50 HotelsNYC's Best New Burgers --By Erika Owen Also on HuffPost: Close. 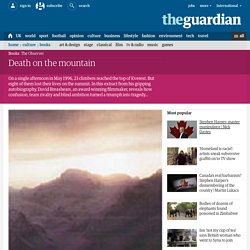 It was another rest day for our team. The day before, on his way to Camp IV, one of our Sherpas, Jangbu, had reported strong winds above 25,000ft. This morning was beautiful, however, not a cloud in the sky. High above, the summit pyramid was crystalline and still, without a hint of a plume. Robert Schauer, one of our team, set up the telescope at Camp II. Since each expedition communicated on different radio frequencies, we didn't receive any dispatches directly. At about 2pm, we got word that Anatoli Boukreev and Neal Beidleman, both guides for Mountain Madness, and some others had reached the summit. It was windy up high, but not fiercely so. But an hour later, at 3pm, we looked up and could see climbers still forging across the traverse to the Hillary Step.

It can't be overstated how light provides an asylum up there. All of this was playing out in lovely, sunlit conditions. We later learnt that 23 climbers reached the summit that afternoon. Step Up Mountain Challenge. 1996 Everest disaster (Seconds from Disaster) Storm over Everest 1996.