I'm Dreaming of a Green Christmas: The Environmental Impact of the Holidays. Environment + Christmas. Greenpeace Save Santa's Home Christmas cards - in pictures. Where do the UK's 6 million Christmas trees end up? Shorn of their baubles, tinsel and twinkling lights, the Christmas trees in a south-east London park have come to meet their end. 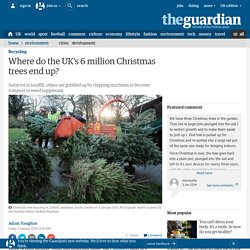 "As long as this thing behaves itself, we could probably stick a hundred trees through it in an hour – it does eat them pretty quick," says David Chapple of the bright orange chipper in front of him, as it gobbles up a tree, sending a scent of pine into the air and a pile of woodchip into the waiting van. The Norway spruce and Nordmann fir being chipped here in Mountsfield park are just a handful of the seven thousand or so that will be recycled in the borough of Lewisham in south London this year alone, up from fewer than two thousand a decade ago. 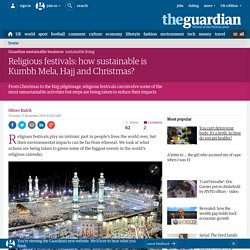 We look at what actions are being taken to green some of the biggest events in the world’s religious calendar. Hajj: tread kindly Nearly three million Muslims head to Mecca in Saudi Arabia every year to complete the Hajj pilgrimage. However, the event’s spiritual benefits come at an environmental cost, with litter and transport-related emissions high on the list of impacts. Muslim pilgrims can now obtain advice on how to reduce their environmental footprint in the Green Guide for Hajj. Published by the UK-based Alliance of Religions and Conservation, the booklet encourages pilgrims to take jute or cloth bags and prayer mats to Hajj and to use reusable drinking bottles instead of plastic equivalents. Kumbh Mela: river clean-up In addition, the municipal authority says it will take steps to stop people washing clothes, animals and cars in the river.

Cucumber trees and courgette decorations – 4 ways to a green Christmas. It’s not easy being green, sang Kermit, so to get everyone in the eco groove at this festive time, some creative inspiration may be needed. 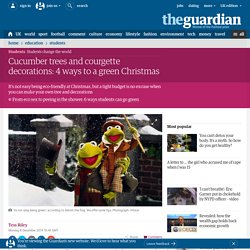 From courgette penguin decorations to microbead-free toiletry gifts, here are a few ways to help you keep it green this Christmas. 1. Deck the halls with boughs of holly In fact, decorate anything you like with fresh greenery if you have access to it (no “borrowing” from the neighbours). This is miles better than garlands of synthetic tinsel that will eventually end up in landfill, potentially via an intrigued pet’s stomach.

In the colder months, fruit and veg provide endless opportunities for sparkling up student digs. Some think that covering their whole house with Christmas lights and setting them to flash in time to Gangnam style is the thing to do at Christmas. According to sustainable fashion advocate and Nottingham Trent undergraduate Sophie Dumontroty, a student budget is no excuse for letting your green credentials drop: 2. 3. 4. High environmental price of a very merry Christmas - Green Living - Environment. The festive season comes at a high price in environmental terms, with people being urged to pledge a greener Christmas by making a major effort to recycle the mountain of Yuletide rubbish which is about to accumulate. 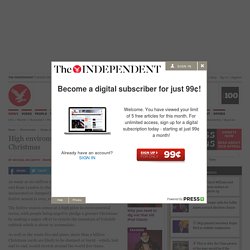 As well as the waste firs and pines, more than a billion Christmas cards are likely to be dumped or burnt - which, laid end to end, would stretch around the world five times. And that's not all. About 83 square kilometres of wrapping paper will also be thrown out or burnt - enough to gift-wrap the island of Jersey. You can also add to that 125,000 tons of plastic packaging - which, the Liberal Democrats helpfully point out, is the equivalent of more than a million John Prescotts. "This is all totally unsustainable," the Liberal Democrats' green spokesman, Chris Huhne, said. Figures dug out by Mr Huhne in a recent Parliamentary answer indicate that nearly two million trees are recycled by local authorities in England and Wales.

The UK waste fallout from 25 December 2006. Real vs. Fake Christmas Trees: Which is Better for the Environment? If you’re in the market for a Christmas tree this holiday season, it turns out in most instances, whether you buy a farm-grown tree or an artificial one doesn’t change how much of an environmental impact you’ll have on the planet. 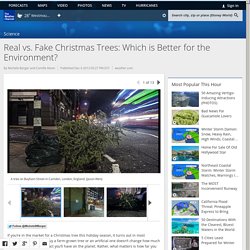 Rather, what matters is how far you drive to get your evergreen, how you dispose of it and how long you use the artificial tree. “Consumers should not be concerned about the environmental impact of having a Christmas tree,” Thomas Harman told weather.com. “Compared to their other impacts, it is very tiny.” Harman is the founder of Balsam Hill, which sells artificial Christmas trees. How to have a Green Christmas. Each year, 50 million Christmas trees are purchased in the U.S. 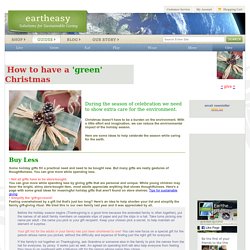 Of those, about 30 million go to the landfill. And added to this is the carbon cost in transporting all these trees to the landfill. Much of the environmental costs associated with the holidays can be reduced by simple awareness and some pre-planning. • Reuse or recycle gift packing materials Bubble wrap can be stored for reuse, or recycled. Foam packing chips are not as easily recycled; if you don't want to store this material for reuse, take it to a shipping center like Mailboxes. etc, who will accept it for their own use.