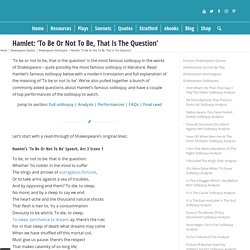 You may have also watched two fantastic actors speak the immortal words, so should have a much clearer understanding of what messages the soliloquy is trying to convey. With all of this in mind, why not try reading the words aloud to yourself one more time: To be, or not to be, that is the question: Whether ’tis nobler in the mind to suffer The slings and arrows of outrageous fortune, Or to take arms against a sea of troubles And by opposing end them. No more; and by a sleep to say we end The heart-ache and the thousand natural shocks That flesh is heir to: ’tis a consummation Devoutly to be wish’d.

To sleep, perchance to dream—ay, there’s the rub: For in that sleep of death what dreams may come, When we have shuffled off this mortal coil, Must give us pause—there’s the respect That makes calamity of so long life. With a bare bodkin? BBC - Teach - Shakespeare Collection. Shakespeare's Globe. Sonnet 130 Lesson by Stephanie Wilczynski on Prezi. Romeo and Juliet - Plot summary - Plot summary - AQA - GCSE English Literature Revision - AQA - BBC Bitesize. There Is No Escaping Shakespeare. Globe Virtual Tour. Why is Shakespeare Important? Why Study Shakespeare? 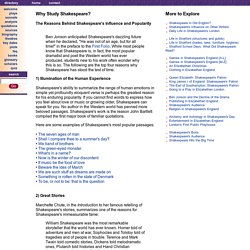 The Reasons Behind Shakespeare's Influence and Popularity Ben Jonson anticipated Shakespeare's dazzling future when he declared, "He was not of an age, but for all time! " in the preface to the First Folio. While most people know that Shakespeare is, in fact, the most popular dramatist and poet the Western world has ever produced, students new to his work often wonder why this is so.

The following are the top four reasons why Shakespeare has stood the test of time. 1) Illumination of the Human Experience Shakespeare's ability to summarize the range of human emotions in simple yet profoundly eloquent verse is perhaps the greatest reason for his enduring popularity. Here are some examples of Shakespeare's most popular passages: • The seven ages of man • Shall I compare thee to a summer's day? 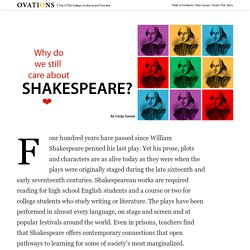 Yet his prose, plots and characters are as alive today as they were when the plays were originally staged during the late sixteenth and early seventeenth centuries. Shakespearean works are required reading for high school English students and a course or two for college students who study writing or literature. The plays have been performed in almost every language, on stage and screen and at popular festivals around the world.

Even in prisons, teachers find that Shakespeare offers contemporary connections that open pathways to learning for some of society’s most marginalized. For two of UTSA’s eminent literary scholars, the bard of Avon’s enduring appeal is an enduring topic as well. The answer is simple for Craven, a professor emeritus at UTSA who taught his first Shakespeare course back in 1965. Alan Craven “There are two poles of debate about Shakespeare’s longevity,” said Bayer. Mark Bayer. Shakespeare Uncovered. Shakespeare Uncovered combines history, biography, iconic performances, new analysis, and the personal passions of its celebrated hosts to tell the stories behind the stories of Shakespeare’s greatest plays. 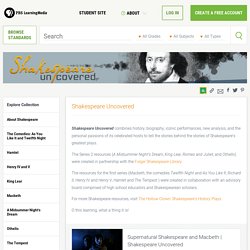 The Series 2 resources (A Midsummer Night’s Dream, King Lear, Romeo and Juliet, and Othello) were created in partnership with the Folger Shakespeare Library. The resources for the first series (Macbeth, the comedies Twelfth Night and As You Like It, Richard II, Henry IV and Henry V, Hamlet and The Tempest ) were created in collaboration with an advisory board comprised of high school educators and Shakespearean scholars. For more Shakespeare resources, visit The Hollow Crown: Shakespeare's History Plays. O this learning, what a thing it is!