To hunt or to protect? Western states struggle with wolf management. HUNTERS, Wash. — Sheep rancher Dave Dashiell got to his feet and wiped the blood from his hands. 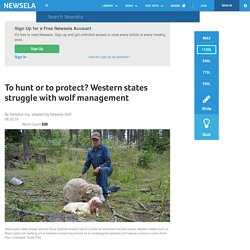 A newborn lamb he had just delivered took one breath, then another. He laid the lamb down gently in front of its mother. "I hope he lives," Dashiell said. Hunters are killing millions of animals, and 1 in 8 of those are endangered. About 1.7 million animal “trophies” have been exported across borders by hunters in the last decade, according to a new report. 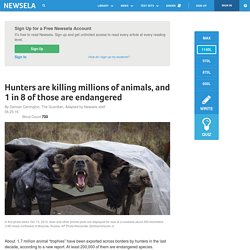 At least 200,000 of them are endangered species. The report found that American hunters are by far the largest killers of trophy animals. Half of all the 11,000 lions shot in the last decade were by Americans. Starving sea lion pups washing ashore, last link in climate change events. SANTA ANA, Calif. — Every year in June, sea lion mothers on the Channel Islands give birth to a pup. 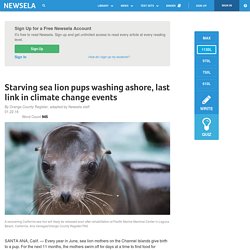 For the next 11 months, the mothers swim off for days at a time to find food for themselves and provide milk for their progeny. In early 2015, sardines and anchovies — the best food — were hard to find. The mothers were forced to dive deeper and swim farther, and by the time they returned to the islands, they didn’t have much milk to offer. The ocean, which in years past had been full with food, was emptier than before. The pups wound up stranded on mainland beaches in record numbers, emaciated and starving.

About Animal Testing. October 21, 2012 Humane Society International More than 100 million animals are killed each year in laboratories around the world. iStock What is animal testing? 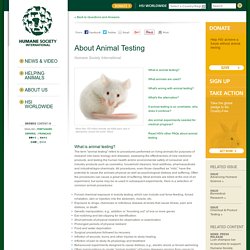 What animals are used? What's wrong with animal testing? Animal Testing - ProCon.org. Animal testing has contributed to many life-saving cures and treatments. 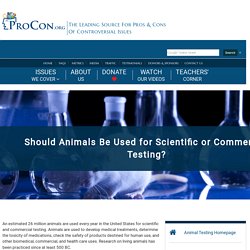 The California Biomedical Research Association states that nearly every medical breakthrough in the last 100 years has resulted directly from research using animals. Experiments in which dogs had their pancreases removed led directly to the discovery of insulin, critical to saving the lives of diabetics. The polio vaccine, tested on animals, reduced the global occurrence of the disease from 350,000 cases in 1988 to 223 cases in 2012. 113] Animal research has also contributed to major advances in understanding and treating conditions such as breast cancer, brain injury, childhood leukemia, cystic fibrosis, malaria, multiple sclerosis, tuberculosis, and many others, and was instrumental in the development of pacemakers, cardiac valve substitutes, and anesthetics.