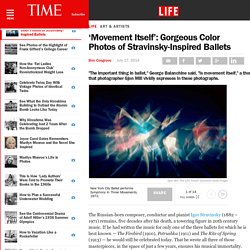 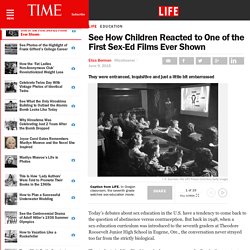 R. Young Mia Farrow: Rare and Classic Photos of an Actress on the Rise. Mia Farrow was 22 years old when LIFE magazine ran a seven-page cover story on the actress in May 1967. 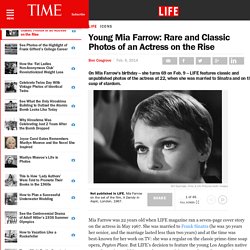 She was married to Frank Sinatra (he was 30 years her senior, and the marriage lasted less than two years) and at the time was best-known for her work on TV: she was a regular on the classic prime-time soap opera, Peyton Place. But LIFE’s decision to feature the young Los Angeles native proved prescient; within a year she was receiving raves for performances in several prominent films — including the Roman Polanski horror classic, Rosemary’s Baby — and would go on to a decades-long career as an award-winning actress and an outspoken, fearless campaigner for human rights. Adhesive Bras: The Fashion Trend That Never Quite Stuck. “For 5,000 years clothes have been draped, tied, buttoned, pinned and buckled on the human form. 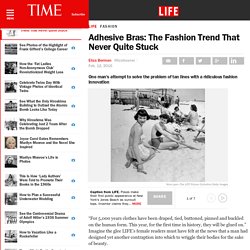 This year, for the first time in history, they will be glued on.” Imagine the glee LIFE’s female readers must have felt at the news that a man had designed yet another contraption into which to wriggle their bodies for the sake of beauty. The design du jour, featured just ahead of beach season in May 1949, was a pair of bra cups a woman could affix to her breasts with an adhesive that caused neither pain nor sticky residue when removed. A Squirrel’s Guide to Fashion. Photos chronicling the adventures and sartorial splendor of an orphaned -- and, in 1940s America, a celebrated -- gray squirrel A Squirrel's Guide to Fashion Nina Leen—Time & Life Pictures/Getty Images. 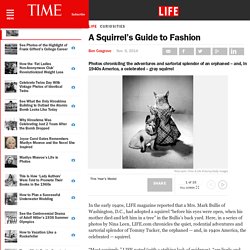 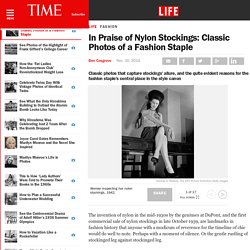 McAvoy—The LIFE Picture Collection/Getty Images Woman inspecting her nylon stockings, 1942. LIFE With Dior: Rare Photos From the Birth of the ‘New Look’ In March 1948, LIFE introduced its readers to a pioneering French fashion designer and what the magazine called his “revolutionary” vision. 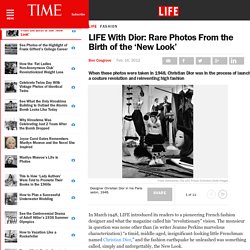 The monsieur in question was none other than (in writer Jeanne Perkins marvelous characterization) “a timid, middle-aged, insignificant-looking little Frenchman named Christian Dior,” and the fashion earthquake he unleashed was something called, simply and unforgettably, the New Look. Here, LIFE.com not only offers a glimpse back at a seminal moment in fashion history, but presents pictures — some that appeared in the magazine, many that were never published — by some of LIFE’s finest photographers, taken at a Dior show in Paris in 1948, when the New Look was all the rage and a timid, middle-aged, insignificant-looking little Frenchman astonished and thrilled the couture world. These Inventions Are Weirder Than Anything You’ll Find at CES This Year. If necessity is the mother of invention, then this is a crop of motherless inventions These Inventions Are Weirder Than Anything You'll Find at CES This Year Allan Grant—The LIFE Picture Collection/Getty Images Caption from LIFE. 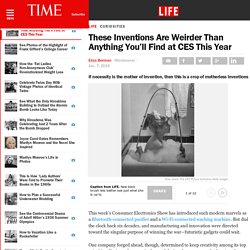 New back brush lets bather see just what she is up to. This week’s Consumer Electronics Show has introduced such modern marvels as a Bluetooth-connected pacifier and a Wi-Fi-connected washing machine. One company forged ahead, though, determined to keep creativity among its top priorities. Is This the Happiest Photo Ever Made? The sad destiny of countless great photographs is that, as the decades pass, the pictures are increasingly in danger of losing their ability to stun, shock, inspire, delight. 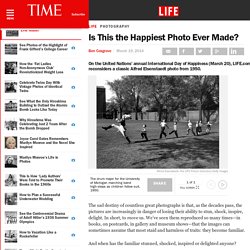 In short, to move us. We’ve seen them reproduced so many times—in books, on postcards, in gallery and museum shows—that the images can sometimes assume that most staid and harmless of traits: they become familiar. And when has the familiar stunned, shocked, inspired or delighted anyone? It’s worthwhile, then, to occasionally make the effort to step back and try to experience famous photographs as if encountering them for the first time. Allan Grant: LIFE Magazine’s Great Chronicler of Hollywood. As a boy, Allan Grant dreamed of becoming an aeronautical engineer. 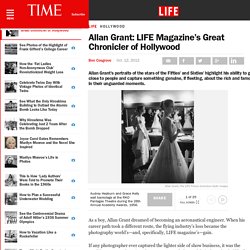 When his career path took a different route, the flying industry’s loss became the photography world’s—and, specifically, LIFE magazine’s—gain. If any photographer ever captured the lighter side of show business, it was the confident New York native who, as a teen, traded a model airplane that he’d built for a pocket Kodak camera, and never looked back. A LIFE staffer from 1947 until the late 1960s, Grant covered the entertainment world from the inside.

His unique blend of cool appraisal and obvious affection for (most) of his subjects went a long way toward making the stars seem just as quirky and approachable as the rest of us mortals. But he was hardly a sycophantic “celebrity photographer,” and Grant (1919 – 2008) was perfectly aware of his own skills as a photographer, and a newsman. That he did. Handsome, glamorous and supremely talented. Vintage Tech: When Printing Photos on Fabric Was the Next Big Thing. “Until now,” LIFE magazine told its readers in December 1947, “anyone claiming to have seen a dinner dress decorated with life-size photographs of the wearer would have met with breath-sniffing suspicion or clinical alarm. Today, however, such dresses can be made and photographs of everything from animals to pearl necklaces are being printed not only on dress fabrics but on upholstery, pillows, ties, bathing suits and lingerie.”

That LIFE devoted several pages and numerous photographs to reporting on this new development (lame pun intended) is an indication of just how remarkable the achievement really was. Remember: This was happening 65 years ago. Men and women had been pushing the technical limits of photography ever since the medium was born, well over a century before — but no one , it seems, had ever bothered to devote the energy, time and money it would take to devise a method for printing pictures directly on to fabric. [See more vintage science & technology on LIFE.com.] Photographer Spotlight: John Dominis. Some photographers are so skilled at covering a specific topic, or through the years have created so distinctive a feel in their pictures, that it’s possible to encounter an image—even an image one has never seen before—and say with something like certainty, “That’s a Leifer” or “That’s a Halsman” or “That’s a Nachtwey.” Familiarity with a recognizable style, meanwhile, hardly breeds contempt; a master can find countless ways to keep his or her vision fresh—even if the subject matter or the visual vocabulary remains relatively constant across decades.

Andreas Feininger might photograph the Brooklyn Bridge a hundred times, but his artistry and technical virtuosity makes it new each and every time. Then there are great photographers whose work is so phenomenally varied—a uniform, unbroken excellence the only common thread running throughout—that every new shot one encounters might have been made by a different individual. Marilyn Monroe: Rare Photos of an Up-and-Coming Star, 1952. Fall Fashion Flashback: Plaids, Calfskin and Platforms Held Sway in 1938. When LIFE magazine published a fashion article on the trends that were expected to reign in the autumn of 1938, the editors focused much of their attention on one particular aspect of the coming season’s styles: namely, the indication that straight lines seemed to be giving way to a softer—or, at the very least, a somewhat less rigid—silhouette.

“Shoppers will find saleswomen swooning over romantic evening dresses,” LIFE assured its readers. “It seems the western fashion world is emerging from the second tubular cycle . . . into a bell-shaped cycle.” “This July,” the feature continued, “buyers from all over the U.S., on their annual pilgrimage to New York showrooms, were amazed at the number of hoopskirts shown by Kallman & Morris, evening-dress specialists. Here were aristocratic hoops for the masses. Here was fashion repeating itself.”

Hoops for the masses. LIFE in a Great City: San Francisco. Photos of San Francisco from the 1930s to the early 1970s, decades during which the city transformed itself as dramatically as any metropolis in America LIFE in a Great City: San Francisco. LIFE With the Rat Pack: Rare Photos of Frank, Dino and Sammy. LIFE.com presents previously unpublished photos of Frank Sinatra, Dean Martin and Sammy Davis Jr. up to their usual shenanigans during their boozy, Rat Pack heyday. LIFE With Grace Kelly and Prince Rainier: Photos From the ‘Wedding of the Century’ Love Letter to New York: Classic LIFE Photos of the Big Apple.