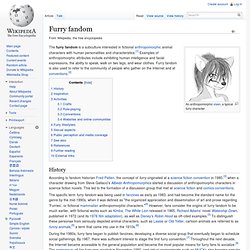 Furry fandom is also used to refer to the community of people who gather on the Internet and at conventions.[2] History According to fandom historian Fred Patten, the concept of furry originated at a science fiction convention in 1980,[3] when a character drawing from Steve Gallacci’s Albedo Anthropomorphics started a discussion of anthropomorphic characters in science fiction novels. This led to the formation of a discussion group that met at science fiction and comics conventions. During the 1980s, furry fans began to publish fanzines, developing a diverse social group that eventually began to schedule social gatherings. Inspiration Activities. Kellogg Collie Dance. Telephone - Gangman Style. Beyond the Trees by Noelle Visconti. Choreography. Craig Ferguson Lenny the Wonder Dog dance number. Jessie J's Domino Flash Mob by Todrick Hall. 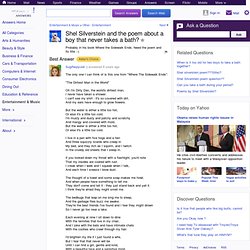 Picture: The World's Dirtiest Man. Shel Silverstein: Sarah Cynthia Sylvia Stout Would Not Take the Garbage Out. Hungry Mungry - Shel Silverstein. Hungry Mungry sat at supper, Took his knife and spoon and fork, Ate a bowl of mushroom soup, ate a slice of roasted pork, Ate a dozen stewed tomatoes, twenty-seven deviled eggs, Fifteen shrimps, nine bakes potatoes, Thirty-two fried chicken legs, A shank of lamb, a boiled ham, Two bowls of grits, some black-eye peas, Four chocolate shakes, eight angel cakes, Nine custard pies with Muenster cheese, Ten pots of tea, and after he, Had eaten all that he was able, He poured some broth on the tablecloth And ate the kitchen table. 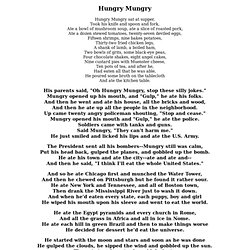 Shel Silverstein: Peanut-Butter Sandwich. By Shel Silverstein (1932-1999) I’ll sing you a story of a silly young king Who played with the world at the end of a string, But he only loved one single thing -- And that was just a peanut-butter sandwich. 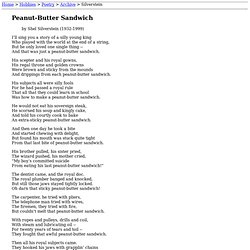 His scepter and his royal gowns, His regal throne and golden crowns Were brown and sticky from the mounds And drippings from each peanut-butter sandwich. His subjects all were silly fools For he had passed a royal rule That all that they could learn in school Was how to make a peanut-butter sandwich. Picture: Peanut-Butter Sandwich. What's Opera, Doc? Duck Amuck. Pepe le Pew- 1949 for scent-imental reasons. Bugs Rules: Leopold. Really Scent (Pepe Le Pew) Really Raw Honey Mobile. Aloe Vera. Julie Bell & Boris Vallejo. Boris Vallejo: Unicorn. Julie Bell: Golden Lover. Instructables - Make, How To, and DIY. Etsy - Your place to buy and sell all things handmade, vintage, and supplies. Best-Ever Baklava. Baklava – a dessert served in many countries around the world, all with their own personal touch. 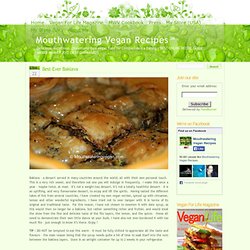 This is a very rich sweet, and therefore not one you will indulge in frequently. I make this once a year – maybe twice, at most. It’s not a weight-loss dessert, it’s not a totally healthful dessert – it is an uplifting, and very flavoursome dessert, to enjoy and lift the spirits. Having tasted the different takes of this from several countries, I have created my own vegan version, spiced up with cinnamon, lemon and other wonderful ingredients. I have tried not to over tamper with it in terms of its original and traditional taste. TIP : DO NOT be tempted to eat this warm – it must be fully chilled to appreciate all the taste and flavours – the main reason being that the syrup needs quite a bit of time to soak itself into the nuts between the baklava layers. Serves 12 medium portions 1 cup of raw pistachio nuts 1 cup roasted pecan nuts ½ cup mixed roasted nuts of your choice a pinch of salt.

Related:  Julie Bell & Boris Vallejo   -  Instructables - Make, How To, and DIY   -  Etsy - Your place to buy and sell all things handmade, vintage, and supplies   -  Stanza: a Revolution in Reading   -  Education   -  Enterprise