‘Social’ egg-freezing is a hideous fertility gamble. The Economics of Male Birth Control. A condom and use manual from 1813 (Wikipedia) When it comes to reversible birth control, there are a lot of options out there for women: pills, rings, intra uterine devices, patches, implants. 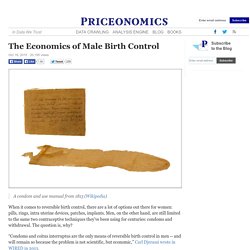 Men, on the other hand, are still limited to the same two contraceptive techniques they’ve been using for centuries: condoms and withdrawal. Elle's #MoreWomen Video Shows Just How Few Women Are At The Top... In Any Industry. This video shows how rare it is for women to be leaders on the world stage - by cutting out all the men. 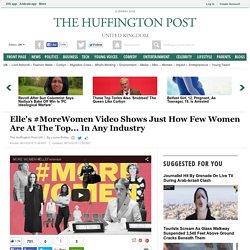 The film photoshops out men from pictures of groups of leaders in politics, business, entertainment and the media, revealing that the women left behind often look rather lonely. The treatment is applied to photos from political boardrooms, the UN and Buckingham Palace, as well as the BBC's Question Time, Saturday Night Live, Masterchef and even University Challenge. The UK parliament would be a drafty place if it replied only on women MPs, as the contrast between these pictures starkly reveals: The pictures aim to highlight how powerful and influential women often stand alone in their field, as part of the Elle magazine #MoreWomen campaign calling for more women at the top. The seven priorities for young feminists today. I first learned about the suffragettes in a history lesson, aged 10, and initially I couldn’t really grasp their significance. 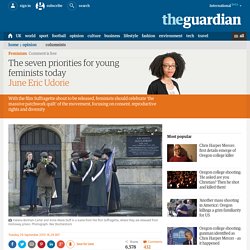 A few years later, I was completely in awe of them. These campaigners were by no means perfect – there were clashes, contradictions and schisms within the movement – but the first wave of feminism did something great for women, both in their fight for our right to the vote, and in the broader implications of that struggle for women’s autonomy and respect.

“Brain Study Confirms Gender Stereotypes”: How science communication can fuel modern sexism. The way much research on sexual differentiation is conducted and communicated has come under intense criticism from scholars in both the natural and social sciences. 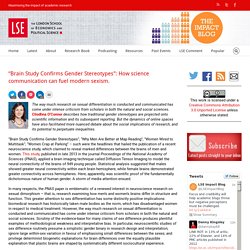 The myth about women in science? Bias at work in the study of gender inequality in STEM. Robust empirical research shows that women are less likely to be hired for STEM jobs, as well as promoted, remunerated and professionally recognised in every respect of academic life. 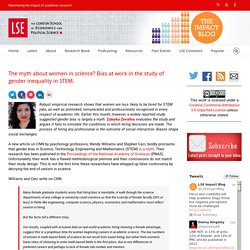 Earlier this month, however, a widely reported study suggested gender bias is largely a myth. Zuleyka Zevallos evaluates the study and argues it fails to simulate the conditions in which hiring decisions are made. The process of hiring any professional is the outcome of social interaction. Biases shape social exchanges. Watching Women Want. To watch elite female athletes is to watch women not give a shit when they look ugly I’ve been watching a lot of the Women’s World Cup, with a fervor that surprises even me. 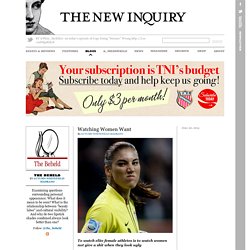 I’m an unlikely soccer fan to begin with; sports, personally speaking, have traditionally been something to be avoided and/or feared. Top maternity doctor: increasing age of first motherhood is irreversible. The shift towards older motherhood is irreversible and it is pointless to warn women to have their children by the age of 35 or risk their babies suffering a range of medical problems, according to Britain's top maternity doctor. 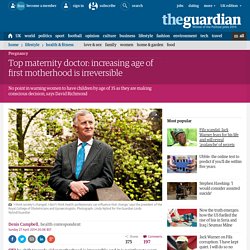 Dr David Richmond's relaxed view of the growing number of women delaying motherhood until their late 30s or early 40s contrasts sharply with the acute concern expressed in recent years by senior doctors, including the government's chief medical officer. "I think it [the trend] is irreversible because of increasing equality in the social, professional, financial [and] corporate environment we live in. Bring back self-defence classes for women – it’s the feminist thing to do. What woman didn’t feel like punching the air this week when they read about the female kickboxer who rendered a sex attacker unconscious by placing his head in a scissor-grip with her legs after having reportedly told him: “Go fuck yourself”? 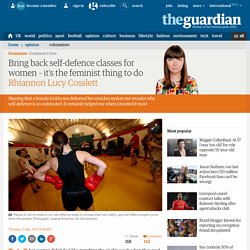 To quote the song from Chicago, Cell Block Tango: he had it coming. The woman, who has chosen to remain anonymous, was awarded £500 for her bravery by the judge in the case, and, while grateful for the gesture, she was quick to point out that “my motivation was just survival at the time”. As someone who has survived a similar attack, I empathise. There is no rhyme or reason to anyone’s behaviour when you think you’re going to die, so words like “bravery” can feel inapposite. After fighting off my attacker in a similarly sweary and forceful way (I kicked, scratched, punched, wrestled him to the ground, and told him he was a motherfucker) I was also praised by a judge for my bravery. 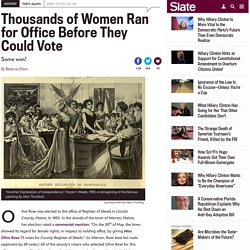 Olive Rose was elected to the office of Register of Deeds in Lincoln County, Maine, in 1853. 'I Don't Know Why We Come': Inside the UN's Commission on the Status of Women. Midtown New York for the past two weeks has been a colorful place, as thousands of concerned women from all over the world have been attending the annual session of the United Nations Commission on the Status of Women. 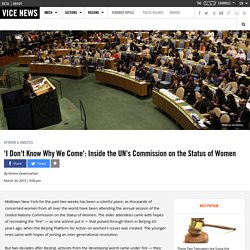 The older attendees came with hopes of recreating the "fire" — as one activist put it — that pulsed through them in Beijing 20 years ago, when the Beijing Platform for Action on women's issues was created. The younger ones came with hopes of joining an inter-generational revolution. But two decades after Beijing, activists from the developing world came under fire — they did not feel it burning within.

Aaronson's position on feminism is supportive, but he can’t get entirely behind it because of his experiences growing up, which he details with painful honesty. He describes how mathematics was an escape, for him, from the misery of growing up in a culture of toxic masculinity and extreme isolation - a misery which drove him to depression, anxiety and suicidal thoughts. The key quote is this: “Much as I try to understand other people’s perspectives, the first reference to my 'male privilege' — my privilege! — is approximately where I get off the train, because it’s so alien to my actual lived experience . . . Silicon Valley Might Be Sexist, But Its Feminism Is Not The Answer. Sexual harassment lawsuits and executive women leaving the industry: this year, sexism in Silicon Valley has made the front-page news.

In June, a former executive and co-founder of the popular dating-app Tinder filed a sexual harassment lawsuit against the company. Whitney Wolfe was allegedly stripped of her co-founder title because she was just a “girl” that would “make the company look like a joke”. Earlier this year, former engineer at the programming network GitHub, Julie Ann Horvath, left the company with public accusations of a sexist internal culture.

Serbian nationalist groups amassed hundreds of their members ahead of the gay pride parade to protest LGBT rights and attempt to prevent the march. Fearing a repeat of the violence in 2010, several thousand anti-riot police and armored vehicles mobilized on the streets of the city in anticipation of this year's procession. VICE News was in Belgrade to monitor the anti-LGBT protests and meet members of Serbia's gay community who were determined to defy the intimidation and march through the streets, regardless of the risks.

Watch Young and Gay in Putin's Russia (Part 1) What do lad mags and rapists have in common? What Do Women Want?: Adventures in the Science of Female Desire by Daniel Bergner – review. If you can get past the studied jauntiness and occasionally histrionic style, Daniel Bergner's What Do Women Want? Says some useful things about female sexuality. 5 Lies that Distort Male Sexuality and Hurt Men. Feminism: A beginners guide. An open letter to all my male friends. To all my male friends, Having or not having children should not define or divide women. The fourth wave of feminism: meet the rebel women. Why women still need husbands. Women for Men. Founders SUZANNE VENKER is a Fox News contributor and the author of three books on marriage, motherhood and the influence of feminism on women, men and society. Evan Rachel Wood attacks MPAA for cutting sex scene featuring cunnilingus.

Why feminism doesn't need a makeover. Jennifer Lawrence is striking a blow for healthy, sweaty women. Mannequins Give Shape to a Venezuelan Fantasy. Douze ans de mariage gay en Hollande : un bilan terrifiant. Being polyamorous shows there's no 'traditional' way to live. If you're a feminist you'll be called a man-hater. You don't need rebranding. The other gender divide: where men are losing out. Pornography is everywhere, and I think it's changing how we feel about sex. The Orgasm Gap: The Real Reason Women Get Off Less Often Than Men and How to Fix It. Do stay-at-home mothers upset you? You may be a motherist. Yes Naomi Wolf, feminists are attacked. But sucking it up is not the answer. The Problem With Men Explaining Things. Ann Romney's convention message to women: Sexism is real, but you can't do anything to change it.

Santorum's stone-age view of women. A TED Talk That Might Turn Every Man Who Watches It Into A Feminist? It's Pretty Fantastic. Ten tips to help our daughters change the world. Dear Daughter: I Hope You Have Some Fucking Awesome Sex. The Hawkeye Initiative. Intermission: What if Gender Roles in Advertising Were Reversed? Gender contamination: when women buy a product, men flee. Hannah Ryan, Avani Dias, Mariana Podesta-Diverio and Lucy Watson. Smopolitan and the false promise of an 'awesome life' How to Create the Perfect Wife by Wendy Moore: Biography of Thomas Day, reviewed. Natascha McElhone: it's time to find an app for gender equality. Lulu app for rating men: It's just as creepy as rating women.

Don't give me this 'if Lehman Sisters had been in charge …' nonsense. Harcèlement de rue: comment aborder le problème sans tomber dans le racisme? Why Obama's compliments to Kamala Harris aren't harmless, but part of a larger problem of benevolent sexism.