Wombs for rent in India: Inside the 'house of surrogates' where poverty-stricken women carry babies for wealthy foreigners. House Of Surrogates documentary airs on BBC4 tomorrowSurrogates are paid $8k - but clinic takes $28k from clientsCommercial surrogacy now worth over £1billion a year By Deni Kirkova Published: 15:54 GMT, 30 September 2013 | Updated: 17:53 GMT, 30 September 2013 'These are Alexander and Katerina, I've had the names for two years,' says the Russian wife of British doctor Michael, 62, of the two embryos that have just been implanted in a surrogate mother. 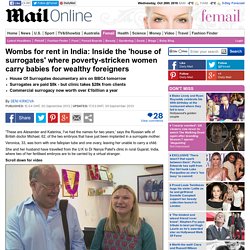 Veronica, 33, was born with one fallopian tube and one ovary, leaving her unable to carry a child. She and her husband have travelled from the U.K to Dr Nanya Patel's clinic in rural Gujarat, India, where two of her fertilised embryos are to be carried by a virtual stranger. Scroll down for video Michael, 62, and wife Veronica, 33, have come all the way to India from the UK to Dr Patel's clinic '[The outside of the clinic] looks very ordinary. Veronica adds: 'My last chance of trying to have my own child is to use a surrogate... Loaded: 0% Adoption rate drops to all-time low, says Australian Institute of Health and Welfare.

Prospective parents face a lengthy wait between the time they are given official approval and the child's arrival. 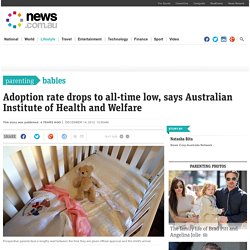 ADOPTION has dropped to an all-time low, as prospective parents wait up to six years to give a home to a child from Asia. Just 333 children were adopted last financial year, the lowest number on record, the Australian Institute of Health and Welfare will reveal today. And for the first time in 13 years, Australian children outnumbered foreign kids, with 55 per cent of adopted children coming from overseas.

Foster parents and step-parents are the most likely to adopt an Australian child already in their care. Adoption rates fall to 'lowest annual number on record' with 317 agreements finalised this year: AIHW. Updated The adoption rate across Australia has fallen, with the 317 permanent care arrangements finalised across the country this year the "lowest annual number on record", according to a report from the Australian Institute of Health and Welfare. 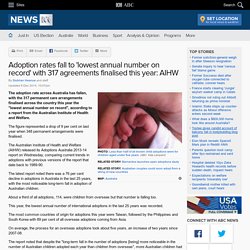 The figure represented a drop of 9 per cent on last year when 348 permanent arrangements were finalised. The Australian Institute of Health and Welfare (AIHW) released its Adoptions Australia 2013-14 report on Wednesday, comparing current trends in adoptions with previous versions of the report that date back to 1989-90.

The latest report noted there was a 76 per cent decline in adoptions in Australia in the last 25 years, with the most noticeable long-term fall in adoption of Australian children. About a third of all adoptions, 114, were children from overseas but that number is falling too. This year, the lowest annual number of international adoptions in the last 25 years was recorded. The surrogacy trap: why our laws need new life. Analysis Updated Should Australia's surrogacy law allow women to be paid for helping infertile couples? 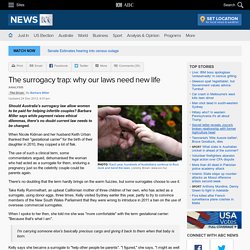 Barbara Miller says while payment raises ethical dilemmas, there's no doubt current law needs to be changed. When Nicole Kidman and her husband Keith Urban thanked their "gestational carrier" for the birth of their daughter in 2010, they copped a lot of flak. The use of such a clinical term, some commentators argued, dehumanised the woman who had acted as a surrogate for them, enduring a pregnancy just so the celebrity couple could be parents again.

There's no doubting that the term hardly brings on the warm fuzzies, but some surrogates choose to use it. Take Kelly Rummelhart, an upbeat Californian mother of three children of her own, who has acted as a surrogate, using donor eggs, three times. When I spoke to her then, she told me she was "more comfortable" with the term gestational carrier: "Because that's what I am". Kelly says she became a surrogate to "help other people be parents". Daily Telegraph. To use this website, cookies must be enabled in your browser. To enable cookies, follow the instructions for your browser below. Facebook App: Open links in External Browser There is a specific issue with the Facebook in-app browser intermittently making requests to websites without cookies that had previously been set. This appears to be a defect in the browser which should be addressed soon.

The simplest approach to avoid this problem is to continue to use the Facebook app but not use the in-app browser. Open the settings menu by clicking the hamburger menu in the top right Choose “App Settings” from the menu Turn on the option “Links Open Externally” (This will use the device’s default browser) Enabling Cookies in Internet Explorer 7, 8 & 9 Open the Internet Browser Click Tools> Internet Options>Privacy>Advanced Check Override automatic cookie handling For First-party Cookies and Third-party Cookies click Accept Click OK and OK Enabling Cookies in Firefox Enabling Cookies in Google Chrome.