How Will Apple's iWatch Impact The Market? Rumours have been rife that this year Apple is set launch its first ever iWatch, a smartphone wristwatch that will perform many similar functions to an iPhone or iPad. 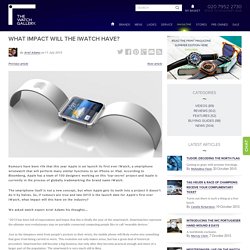 According to Bloomberg, Apple has a team of 100 designers working on this 'top-secret' project and Apple is currently in the process of globally trademarking the brand name iWatch. The smartphone itself is not a new concept, but when Apple gets its teeth into a project it doesn't do it by halves. So, if rumours are true and late 2013 is the launch date for Apple's first ever iWatch, what impact will this have on the industry? We asked watch expert Ariel Adams his thoughts... "2013 has been full of expectations and hopes that this is finally the year of the smartwatch. Just as the timepiece went from people’s pockets to their wrists, the mobile phone will likely evolve into something that goes from being carried to worn. Apple has more or less confirmed that it is working on a wristwatch style product. Charlotte Elizabeth: An Interview With Olivia Burton...

Founded only in 2012, Olivia Burton is a brand that aims to create distinctive contemporary and fun watches. 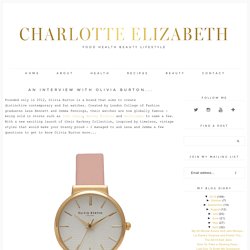 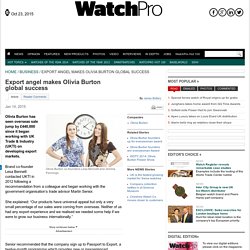 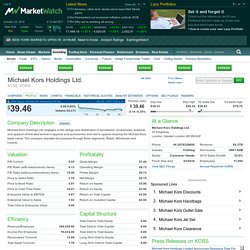 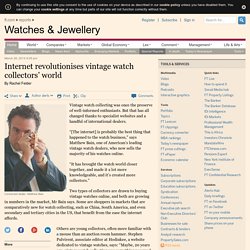 But that has all changed thanks to specialist websites and a handful of international dealers. “[The internet] is probably the best thing that happened to the watch business,” says Matthew Bain, one of American’s leading vintage watch dealers, who now sells the majority of his watches online. “It has brought the watch world closer together, and made it a lot more knowledgeable, and it’s created more collectors.” Two types of collectors are drawn to buying vintage watches online, and both are growing in numbers in the market, Mr Bain says. Others are young collectors, often more familiar with a mouse than an auction room hammer. “It was kind of a club and you had to be an insider to participate. Selling on the internet and through social media has made it easy for dealers to serve customers from around the world, no matter where those dealers are. As Mr. How The Watch Industry Will Save Itself.

On the eve of the Apple Watch announcement no one was really sure what to expect. 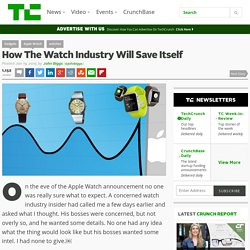 A concerned watch industry insider had called me a few days earlier and asked what I thought. His bosses were concerned, but not overly so, and he wanted some details. Luxury watches defy the downturn. Amid gloomy talk of a possible triple-dip recession in Britain and the march of austerity across Europe, some people somewhere are spending an absolute fortune on showpiece watches. 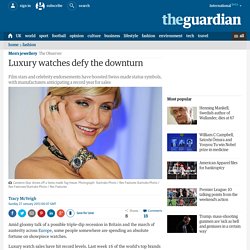 Luxury watch sales have hit record levels. Last week 16 of the world's top brands were in Geneva to showcase their latest micro-technologies and elegant craftsmanship. And all indicators suggest that, despite myriad alternative means of telling the time, the next 12 months will be even more profitable for them. The 23rd annual Salon International de la Haute Horlogerie (SIHH) trade fair ended on Friday, celebrating a 10% rise in year-on-year visitor numbers. In April there is the Baselworld trade fair, which will be the most ambitious ever.

Buoyed by good pre-Christmas sales, watchmakers have never been more bullish. According to Bill Prince, deputy editor of GQ: "It's not about ostentatious wealth. Ladies Watches. Olivia Burton founders Lesa Bennett and Jemma Fennings know a thing or two about style; the two met whilst studying at London College of Fashion and earned their chops at Selfridges, ASOS and TopShop where they worked as fashion buyers. 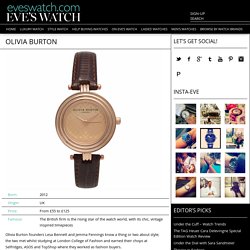 Their latest range, inspired by nature, is a striking yet elegant collection, with delicate images of birds, flowers, butterflies and woodland. Export angel makes Olivia Burton global success. 12 best women's watches. Here is our summer watch edit, including a range of designs including so-pretty-it-could-be-jewellery bracelet watches, chic vintage-inspired pieces, those with interchangeable straps for the chameleons among you and sports-luxe inspired numbers. 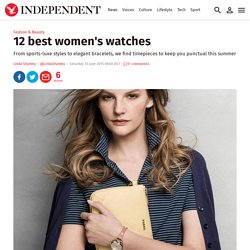 Prices start at just £10 so there should be something for all budgets. 1. Casio Mini Digi Watch in Black Denim: £28, urbanoutfitters.com The Japanese brand’s digital watches have become cult classics. This neat one, with a slimline dark denim strap and stainless steel case, is a twist on the old favourite. Buy now 2. From Daniel Wellington to Olivia Burton - we look at this season's most wanted watch list - Fashion North. It's time to treat yourself to a new watch The best wrist candy in all the land doesn’t have to cost the world, whether you want to treat yourself or hint to someone else. 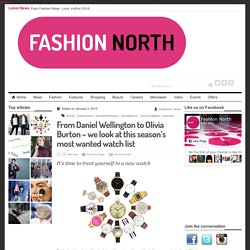 Watches in the United Kingdom. Executive Summary It is increasingly easy for most consumers to tell the time without the use of a watch, given the fact that many consumers are rarely parted from their smartphones. Surveys in 2010 indicated that one in seven UK consumers felt that they had no need of a watch. With smartphone household penetration rates soaring during the review period, it is likely that this level has risen further. LVMH Group's global watches and jewelry revenue 2008-2014. Global Luxury Watch and UK Watch Repair Market. I have put together this report to provide a brief overview of the state of the global luxury watch market, identify the popular brands and demonstrate the current size of the UK watch repair market.

The Swiss luxury watch industry is extremely secretive and figures and data are never directly provided by the watchmaking brands themselves. Thankfully the Federation of the Swiss Watch industry collects and makes public official export data, which enables us to gain an insight into the fortunes at the centre of world’s luxury watchmaking industry. Global Luxury Watch Market The world export market for Swiss watches was £14.54 billion in 2013. Since the 1990s the industry has enjoyed massive growth, often in the double digits. Europe and North America have continued to provide stable sales platforms and remain important markets for luxury watches with a combined share of over 40% of the market. As a result of these declines, the overall growth in the global watch markets slowed to +1.9%. News,Trends And Market Intelligence For The British Watch Industry. Businessinsider.