Science. Science. RE. PPD assignment. Maths. 10 top tips for ‘outstanding’ RE lessons - Discovery RE. In 2013, my school underwent both the Statutory Inspection of Anglican schools and Ofsted. 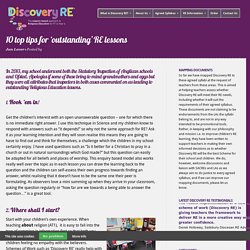 Apologies if some of these bring to mind grandmothers and eggs but they were all attributes that inspectors in both cases commented on as leading to outstanding Religious Education lessons. 1. Hook ‘em in! Get the children’s interest with an open unanswerable question – one for which there is no immediate right answer. I use this technique in Science and my children know to respond with answers such as “it depends!” 2. Start with your children’s own experience. 3. The Internet and smart boards are marvellous tools to allow children to access pieces of art inspired by religions and faith. 4. You can choose anything from pop to classical! 5. Teaching_Easter_Pedagogical_Fantasy.pdf. News. New on-line resource If you’d like to know how to cater for a mixed faith gathering or why so many people today are vegetarians, help is at hand. 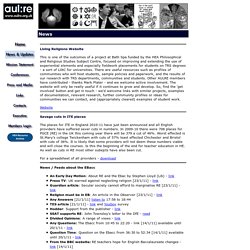 For the first time ever, the Shap Working Party on Education in Religions has published its annual journal directly on-line at www.shap.org – and the 2009 topic is Food, Faith and Community. This new e-journal includes a wide variety of free articles for teachers and others interested in learning more about religions and beliefs, with contributions from perspectives rarely found in conventional text books, for example Zoroastrian, Pagan, Bahá’i, Humanist, Orthodox Christian, as well as from the more familiar religions. Notes for editors For more information about the 2009 e-journal Food, Faith and Community, please see or contact marilyn.mason@virgin.net. Welcome to the OCRT. Sponsored link. 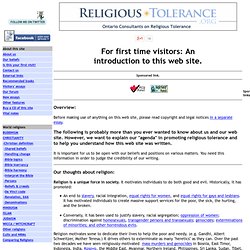 Overview: Before making use of anything on this web site, please read copyright and legal notices in a separate essay. The following is probably more than you ever wanted to know about us and our web site. However, we want to explain our "agenda" in promoting religious tolerance and to help you understand how this web site was written. The European Forum for Teachers of RE.

Religious Education Activities. At The Religion Teacher you can find a large collection of Catholic religious education activities for various liturgical seasons, topics, and age levels. 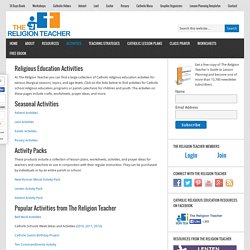 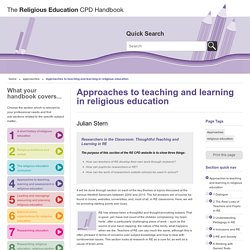 How can pupils be researchers in RE? How can the work of researchers outside schools be used in school? It will be done through section on each of the key themes or topics discussed at the various Westhill Seminars between 2004 and 2010. The full answers will of course be found in books, websites, universities, and, most of all, in RE classrooms. Here, we will be providing starting points and clues.

Religious education classes 'needed' in schools. 30 January 2015Last updated at 19:12 ET By Judith Burns Education reporter, BBC News The government is being urged to address a shortage of RE teachers Developing young people's "religious literacy" would help to make them less vulnerable to radicalisation, a conference will hear later. 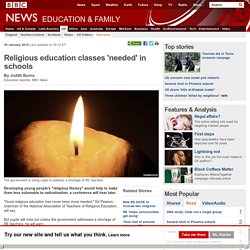 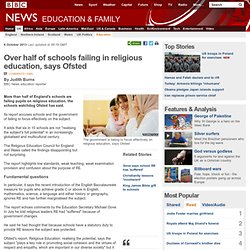 Its report accuses schools and the government of failing to focus effectively on the subject. It adds that six in 10 schools are not "realising the subject's full potential" in an increasingly globalised and multicultural century. The Religious Education Council for England and Wales called the findings disappointing but not surprising. The report highlights low standards, weak teaching, weak examination provision and confusion about the purpose of RE. Fundamental questions The report echoes comments by the Education Secretary Michael Gove. Ofsted says religious education teaching 'not good enough' - Education News - Education - The Independent. The education standards watchdog says one of the weakest aspects of religious education is the teaching of Christianity, which is judged to be "inadequate" in one in three primary schools. 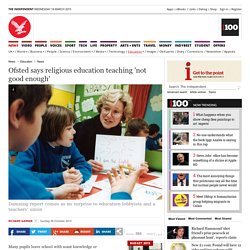 Lessons, in primary and secondary schools, were characterised by low standards, weak teaching, a confused sense of purpose about RE, and there was a lack of searching questions in examinations such as the GCSE. In addition, the report found that the subject is being squeezed out of the curriculum by the Government's education reforms – partly because of its exclusion from Education Secretary Michael Gove's English Baccalaureate school league table measure, which ranks schools on their performance in English, maths, science, languages and the humanities (history or geography). RE - General Teaching Ideas. Religious studies teaching is pathetic – either improve it, or ditch it. For years my daughter called it “colouring in”. 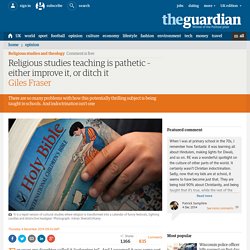 And I assumed it was some sort of free lesson in the timetable. Much later I discovered this was the period that her school knew as religious studies – a subject, I am proud to say, that my children have all been spectacularly bad at. Like them, I glazed over at the sheer inanity of the subject matter: a tepid version of cultural studies where religion is transformed into a calendar of funny festivals, lighting candles and distinctive headgear. And when the curriculum had the temerity to venture into territory with even the vaguest potential for moral or spiritual gravitas, it was obvious that a sort of moral and intellectual panic gripped many of the teaching staff. Which is why I am delighted to support the British Humanist Association, which is complaining that its own position is not being represented on the curriculum for GCSE and A-levels. Like them, I am dismayed. Teaching religious education. Religious Education Pedagogy and the history of RE.

RE:ONLINE. Why should pupils learn about religion and belief? 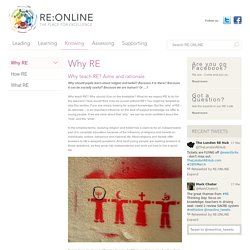 Because it is there? Because it can be socially useful? Because we are human? Or …? RE:ONLINE. How does our understanding of the religious, philosophical and educational world influence our way of teaching RE? Are we aware of our assumptions and can we justify them? People use the word ‘pedagogy’ in many ways. Literally from the Greek, it means ‘the process by which a child is led to learning’. Nowadays this takes in the teacher’s assumptions about the rationale and purpose of the subject, together with the national and local conditions in which they teach.

Approaches to teaching and learning in religious education. The RE curriculum brings together teachers (whose work is pedagogy) and pupils (whose work is learning) (Stern 2006, chapter 5). ‘The curriculum’ describes what may be taught and learned, whilst ‘pedagogy’ describes how it might be taught and learned. Grimmitt has noted that, of the various approaches to RE pedagogy represented in his book, it is quite remarkable that to date there have been no extended, independent evaluations of any of the pedagogies of RE represented in this book, other than as pilot studies undertaken during the life of the projects themselves’ (Grimmitt 2000, p 22). Since 2000, there has been some significant new research on RE pedagogy. Most of the traditions of RE pedagogy (as described in Grimmitt 2000) are broadly in the constructivist tradition, although it is only Grimmitt himself (within that book) who writes extensively about constructivism. VIDEO: The interpretive Approach - Bob Jackson.