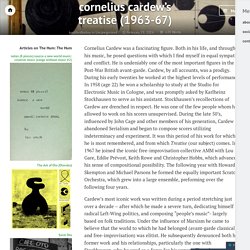 Both in his life, and through his music, he posed questions with which I find myself in equal sympathy and conflict. He is undeniably one of the most important figures in the Post-War British avant-garde. Cardew, by all accounts, was a prodigy. During his early twenties he worked at the highest levels of performance. In 1958 (age 22) he won a scholarship to study at the Studio for Electronic Music in Cologne, and was promptly asked by Karlheinz Stockhausen to serve as his assistant. Tibetan buddhist tantric scores – The Hum Blog. I’ve been a devotee of Tibetan Buddhist Tantric music for years. 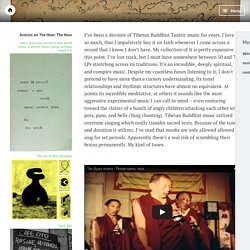 I love it so much, that I impulsively buy it on faith whenever I come across a record that I know I don’t have. Lost Tapes Reveal Astronauts Heard Unexplained ‘Music’ On Far Side Of The Moon. Lost recordings reveal that crew of an Apollo mission had strange music like radio transmissions coming through their headsets. 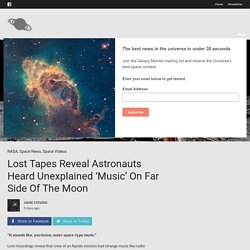 Understandably subject to great debate, this information has been recently declassified. The crew was the 1969 crew of Apollo 10, and now four decades later these lost recordings have found the light of day. The recordings contain “strange, otherworldly music coming through the Apollo module’s radio,” according to an upcoming Science Channel series, NASA’s Unexplained Files.

Until now, everyone believed this mission was completely flawless. Read below for the conversation the three astronauts had when they encountered the sounds: “It sounds like, you know, outer space-type music.” That music lasted for nearly one hour and before the Apollo crew had regained connection with earth, they debated whether or not to tell NASA about the strange phenomena. Ancient Builders Created Monumental Structures That Altered Sound And Mind – Say Researchers. The results of recent research suggests that ancient, or pre-historic, builders of the monumental structures found in such diverse places as Ireland, Malta, southern Turkey and Peru all have a peculiarly common characteristic – they may have been specially designed to conduct and manipulate sound to produce certain sensory effects. 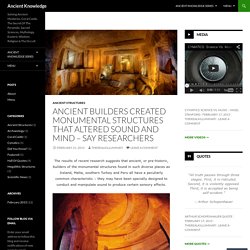 Some ancient monumental structures were built to manipulate sound for sensory and mind effects – suggests recent research. Beginning in 2008, a recent and on-going study of the massive 6,000 year-old stone structure complex known as the “Hal Saflieni Hypogeum“ on the island of Malta, for example, is producing some revelatory results. The Hypogeum of Hal Saflieni is an underground cave system covering around 500m² on 3 levels, with various inter-connecting corridors and passage ways that lead to a number of small chambers, built between 3000-2500 B.C. Research carried out in February 2014 by Dr. But the Hypogeum is not alone in its peculiar sound effects. Vijay Iyer, the Harvard Professor Changing Jazz. Vijay Iyer’s music can be jubilant and dramatic, but Iyer is not. 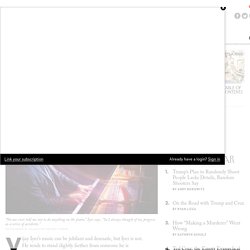 He tends to stand slightly farther from someone he is speaking with than people usually do. Seated, he sometimes leans back from an engagement, as if the extra room allowed him more time to reach a judgment. His gaze is examining, and he occasionally looks at people askance, which makes him appear skeptical. In conversation, he seems cautious but precise and quietly determined. He stands with his feet spread and his knees locked, like someone in the military.

Lately, Iyer, who is forty-four and a Harvard professor, has been the most lauded piano player in jazz. The Last Second Of Every AC/DC Song Ever Recorded. Here’s a question you’ve probably never asked yourself: “What does it sound like if you string together the end of every AC/DC song ever made?” 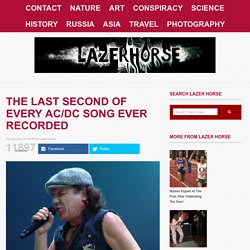 A couple of guys called Mark and Neanderpaul decided they would find out the answer. They took the dying moments of every single AC/DC song ever recorded and lovingly stitched them together into a weird crochet of crashes and chords. I don’t know how long it took them, but it must have been a labour of love, and I assume there were times when they really wished they hadn’t bothered starting. On the plus side, what they have given the world is a wonderful insight… well, perhaps “insight” is too strong a word. Keep a straight face through this little lot, if you can: Pretty bonkers, right?

Here’s some more musical stuff if you feel the need for some variety after that monotone barrage. (Click this image if you’re on the desktop, or use the link below if you’re on a mobile) Music, Language, and the Brain / AvaxHome. " A major synthesis that will be indispensable to neuroscientists, and a thought-provoking and illuminating exploration of the mental and neural foundations of music and language for anyone interested in the human brain. 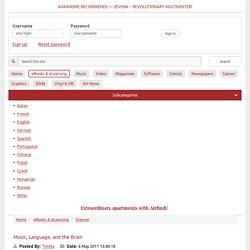 Electronic music currently enjoys a cushy relationship with the members of the rock press, but it wasn’t too long ago when anything produced with an instrument that wasn’t a guitar was met with suspicion by critics whose point of reference was blues-based rock ‘n’ roll. 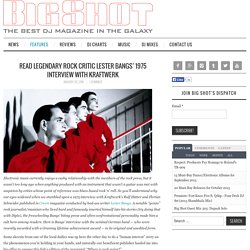