Full story: The gender gap in unpaid care provision: is there an impact on health and economic position? - Office for National Statistics. National level comparison The 2011 Census shows that there were approximately 3.34 million females and 2.44 million males providing some level of unpaid care in England and Wales, 11.9 per cent and 9.0 per cent of the usually resident female and male household population, respectively. 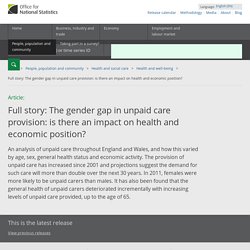 Since 2001, the number of female and male unpaid carers has increased slightly; in 2001 the percentage of females providing unpaid care was 11.5 per cent, while the percentage of males was 8.8 per cent; however, the majority of this increase occurred in the category 50 hours or more unpaid care per week; among females the number increased by around 155,700 from 2.5 per cent of the female population to 2.9 per cent; among males the increase was approximately 116,000 from 1.7 per cent of the male population to 2.0 per cent. In both England and in Wales, unpaid care provision rose incrementally with increasing age to age 64 (Figure 1).

Source: Census - Office for National Statistics. Women are better off today, but still far from being equal with men. There have been huge changes for women in terms of employment in the past decades, with women moving into paid employment outside the home in ways that their grandmothers and even their mothers could only dream of. 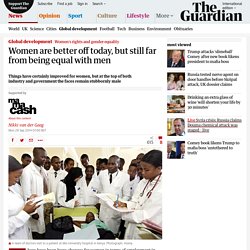 In the US, for the first time, in 2011, women made up slightly more than half the workforce. There are (some) high-profile women chief executives. There is a small but increasing number of female presidents. Women are moving into jobs that used to be done by men. The REAL gender gap scandal: Why boys are the true victims of discrimination. By Winifred Robinson Updated: 00:06 GMT, 8 August 2009 As one of six daughters growing up in the Seventies, girls were so little prized compared with boys that a friend of my father even expressed his sympathy rather than congratulations when my youngest sister, a perfectly healthy child, was born. 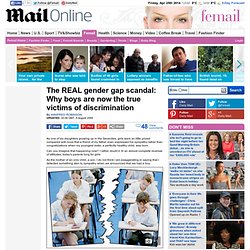 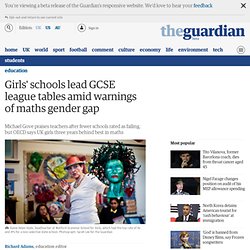 Two other selective state girls' schools – Chelmsford County High School for Girls in Essex and Queen Elizabeth's School in north London – were the only ones to achieve the double of 100% passes for all their pupils in both the government's target for GCSEs and the newer English Baccalaureate, or EBacc, measure. The best performing non-selective state school was Watford Grammar School for Girls – it is a comprehensive despite the name – which had the highest proportion of pupils gaining A* and A grades among schools of its type. Crespi. Gender Socialization. Gender Roles in Media. Media plays a large role in creating social norms, because various forms of media, including advertisements, television, and film, are present almost everywhere in current culture. 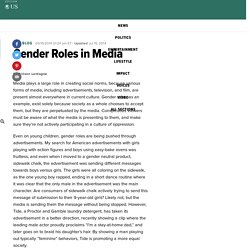 Gender roles, as an example, exist solely because society as a whole chooses to accept them, but they are perpetuated by the media. Conspicuous viewers must be aware of what the media is presenting to them, and make sure they’re not actively participating in a culture of oppression. Even on young children, gender roles are being pushed through advertisements. My search for American advertisements with girls playing with action figures and boys using easy-bake ovens was fruitless, and even when I moved to a gender neutral product, sidewalk chalk, the advertisement was sending different messages towards boys versus girls. How have gender stereotypes changed in the last 30 years? A new study finds that gender stereotypes are as strong today as they were 30 years ago, and that people are even more likely now to believe that men avoid "traditional" female roles. 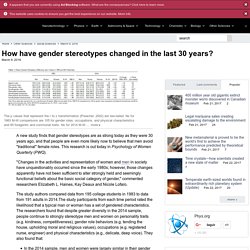 This research is out today in Psychology of Women Quarterly (PWQ). "Changes in the activities and representation of women and men in society have unquestionably occurred since the early 1980s; however, those changes apparently have not been sufficient to alter strongly held and seemingly functional beliefs about the basic social category of gender," commented researchers Elizabeth L.

Haines, Kay Deaux and Nicole Lofaro. The study authors compared data from 195 college students in 1983 to data from 191 adults in 2014.The study participants from each time period rated the likelihood that a typical man or woman has a set of gendered characteristics. Proper men, proper women: Gender roles in contemporary UK society. Are gendered toys harming childhood development? Many parents are tired of the pink and blue divide in the toy aisles. 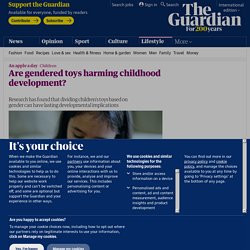 Just last month, the White House held a conference on gender stereotypes in toys and media, with many toy manufacturers and experts attending. After feedback, Target announced in 2015 that it would get rid of signs labeling toys for boys or for girls. A UK campaign called Let Toys Be Toys seeks to get retailers to stop categorizing toys and books for one gender only. Developmental psychologists and sociologists are happy to finally see pushback from parents.

Researchers have worried about the impact of having toys that were so segregated by gender for some time, says Lisa Dinella, associate professor at Monmouth University and Principal Investigator of the Gender Development Laboratory. Clearly divided pink and blue aisles with dolls and tea sets on one side and trucks and building blocks on the other is actually a pretty recent development. Between ages three to five, gender is very important to children, says Brown. Gender identity is a result of social conditioning. DYA. What makes a man? 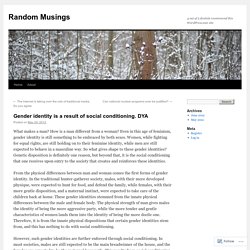 How is a man different from a woman? Even in this age of feminism, gender identity is still something to be embraced by both sexes. Women, while fighting for equal rights, are still holding on to their feminine identity, while men are still expected to behave in a masculine way. So what gives shape to these gender identities? Genetic disposition is definitely one reason, but beyond that, it is the social conditioning that one receives upon entry to the society that creates and reinforces these identities. Is 'Disney Princess culture' a bad influence on young girls? Tuesday June 28 2016 Disney Princesses – time to let them go? 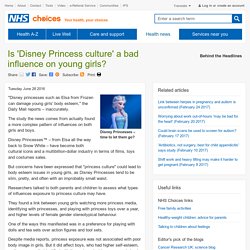 "Disney princesses such as Elsa from Frozen can damage young girls' body esteem," the Daily Mail reports – inaccurately. The study the news comes from actually found a more complex pattern of influences on both girls and boys. Inside Britain's Steroid Epidemic - VICE. Steroid use in Britain is on the rise. 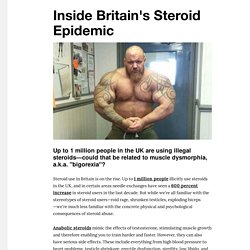 Up to 1 million people illicitly use steroids in the UK, and in certain areas needle exchanges have seen a 600 percent increase in steroid users in the last decade. But while we're all familiar with the stereotypes of steroid users—roid rage, shrunken testicles, exploding biceps—we're much less familiar with the concrete physical and psychological consequences of steroid abuse. Anabolic steroids mimic the effects of testosterone, stimulating muscle growth and therefore enabling you to train harder and faster. PressReader.com - Connecting People Through News. Women in Politics – The Fawcett Society. Image courtesy of Jacky Flemming, all rights reserved. Women are poorly represented in most political institutions in the UK. The places where women are best represented are the Welsh Assembly (41.7%) and Members of the European Parliament which has increased to 41.1% since the 2014 elections.

Across the UK, women make up: Empowering Women in Business - The Glass Ceiling - Feminist Majority Foundation. The Glass Ceiling: How women are blocked from getting to the top Recent headlines tell the story that the popular media wants us to believe about women in the executive suite: "Women Gain Numbers, Respect in Board Rooms," "New Career Trend: She Goes, He Follows," "Women Entrepreneurs Have Come a Long Way,"Women are Liberating a Citadel of Male Power," and "You've Come a Long Way, Baby. " Clever as the headlines are, these depictions of women's success in the corporate world are misleading.

Increasingly, women are bumping into a "glass ceiling. " Ann Morrison describes the problem: the glass ceiling is a barrier "so subtle that it is transparent, yet so strong that it prevents women from moving up the corporate hierarchy. " Feminism: Issues & Arguments: Issues and Arguments: Amazon.co.uk: Jennifer Mather Saul: 9780199249473: Books.

Women shoulder the responsibility of ‘unpaid work’ Women carry out an overall average of 60% more unpaid work than men, ONS analysis has shown. ONS analysis of time use data shows that women put in more than double the proportion of unpaid work when it comes to cooking, childcare and housework. On average men do 16 hours a week of such unpaid work, which includes adult care and child care, laundry and cleaning, to the 26 hours of unpaid work done by women a week. UK Government Web Archive – The National Archives. Thousands of children as young as five act as family carers, figures show. Nearly 10,000 children aged five to seven are acting as unpaid carers for family members or guardians, according to figures that have been published which were described by one children's charity as the tip of the iceberg. The data, compiled from the 2011 census, shows nearly a quarter of a million people under 19 in England and Wales were caring for parents, siblings and others – coping with pressures which charities say cause many to fall behind in school and miss out on their own childhoods.