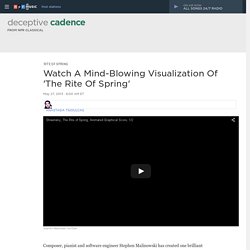 Over the course of some forty years, he's honed what he calls his "Music Animation Machine" from a 20-foot printed scroll to the software and iPad apps he's created — but the results are art. His animations posted on YouTube have gleaned over 100 million page views, from Debussy's "Claire de lune" to the Allegretto movement of Beethoven's Seventh Symphony. And Bjork enjoyed his work so much that she commissioned him to create the animations for her "Biophilia" project. Most recently, Malinowski has created animations for Stravinsky's ballet The Rite of Spring, just in time for the ballet's 100th anniversary on May 29. Hozier - Cherry Wine. Elle King - Ex's & Oh's. Sia - Alive (Audio) Sia - Bird Set Free (Audio) First Watch: Darlingside, 'God of Loss' Colbert and Legend Sing ‘America the Beautiful’ WALK THE MOON - Shut Up and Dance. Bryan Ferry - Johnny & Mary. Gypsophilia - Horska.

Jazz for Cows. Sergei Polunin, "Take Me to Church" by Hozier, Directed by David LaChapelle. The Political Folk Song Of The Year : The Record. Alynda Lee Segarra of Hurray for the Riff Raff. 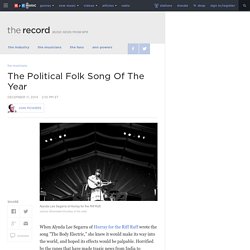 "It will hopefully continue to do its work by encouraging the listener to question the culture of violence we are living in," she wrote in a recent email, connecting "The Body Electric" to recent events in Missouri and New York. "I am mostly familiar with how the song has taught me there is a true connection between gendered violence and racist violence. The video's beauty draws in the viewer; its subtler messages inspire a profound emotional reaction.

As Fast As My Feet - Thompson Family. Meghan Trainor - Title (Audio) The Peak from Christian Mülhauser on Vimeo. Mumford & Sons I'm on Fire. When I Get My Hands On You - Lyrics by Bob Dylan & Vocals by Marcus Mumford. Rhiannon Giddens - Shake Sugaree. Willy Mason - Talk Me Down. Orenda Fink, 'Holy Holy' First Watch: Kishi Bashi, 'In Fantasia' Looping Cello Version - Meghan Trainor's "All About That Bass"

OneRepublic - Counting Stars. Dmitrij & Daniil Simkin - SIMKIN vs simkin. AMAZING & FUNNY HANDS DANCE ( We No Speak Americano) Passenger - Let Her Go. Listen to the Mash-Up T-Swift Is ‘Obsessed’ With. First Watch: Luluc, 'Tangled Heart' Zooey Deschanel and Joseph Gordon-Levitt - Why Do You Let Me Stay Here? She & Him - Stay Awhile. Sia Performance: "Chandelier" Feat. Lena Dunham - Late Night with Seth Meyers. KEXP Presents: Júníus Meyvant. Sam Smith - I'm Not The Only One. George Ezra - Listen to the Man. Meghan Trainor - All About That Bass. Video: She & Him cover Dusty Springfield.

The lovely and talented duo of She & Him, aka M. 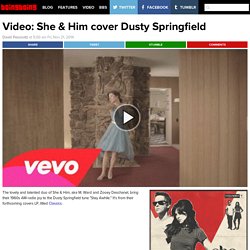 The National Mansion on the Hill. Dr Hook You make my pants want to get up and dance. Lizzy Caplan sings "You Don't Know Me" In this clip from the first season of Showtime drama Masters of Sex, Freaks and Geeks and Party Down actor Lizzy Caplan sings a cover of the tune most popularized by Ray Charles. 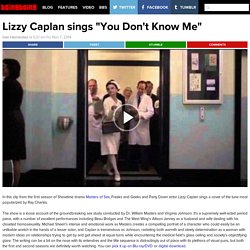 The show is a loose account of the groundbreaking sex study conducted by Dr. William Masters and Virginia Johnson. It's a supremely well-acted period piece, with a number of excellent performances including Beau Bridges and The West Wing's Allison Janney as a husband and wife dealing with his closeted homosexuality. Michael Sheen's intense and emotional work as Masters creates a compelling portrait of a character who could easily be an unlikable wretch in the hands of a lesser actor, and Caplan is tremendous as Johnson, radiating both warmth and steely determination as a woman with modern ideas on relationships trying to get by and get ahead at equal turns while encountering the medical field's glass ceiling and society's objectifying glare.

Or digital download. Doug Paisley feat. Bonnie 'Prince' Billy, 'Until I Find You' Paul Rudd lip-syncing to Queen is so good that even Jimmy Fallon can’t compete. Choros: A Transfixing Experimental Dance Film by Michael Langan & Terah Maher. Released three weeks ago after a year on tour at various film festivals, {*style:<a href=' is the latest experimental art film from director {*style:<a href=' Langan{*style:</a>*} the explores the movement of the human body, specifically the motion of dancer {*style:<a href=' Maher{*style:</a>*}. 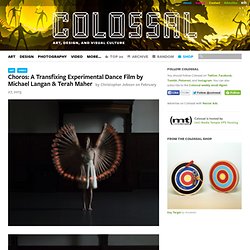 Choros follows in the steps of Eadweard Muybridge, Etienne-Jules Marey, and Norman McLaren, all of whom spent years studying the physical moment of animals and humans through film. Langan takes the next step using new digital innovations to layer some 32 sequential instances of a single movement and then stretch it out over time. Papa americano. Slow Club: Two Cousins. A new video for Slow Club from their forthcoming album out in September, featuring dancers Ryan Francois and Remy Kouame performing an homage to dancers Al Minns and Leon James. 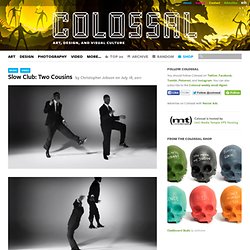 The music in no way “matches” the dancing, and yet creates such a beautiful juxtaposition. A Sultry New Dance Video for OK Go’s ‘Skyscrapers’ Another day, another wonderful music video by OK Go. 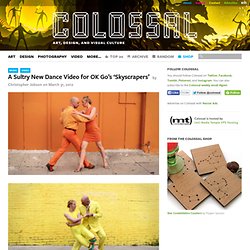 This new video for Skyscrapers features a sultry montage of dance moves through a series of colorful urban backdrops. The clip was directed and produced by Grammy Award-winning choreographer and director Trish Sie (the lady above) paired with Moti Buchboot. More than many of OK Go’s songs lately, I’m really enjoying this one and might have to pick it up. Waltz on the Walls: An Aerial Dance Performance on the Side of Oakland’s City Hall.

This surprisingly lovely dance performance was filmed vertically on the side of Oakland’s 18-story City Hall building earlier this month at the Art + Soul Festival. 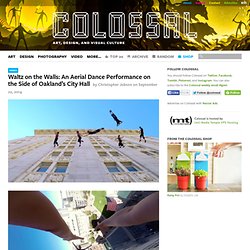 The dancers are Amelia Rudolph and Roel Seeber from Bandaloop. (via The Awesomer) Fiona Apple, Elvis Costello - "I Want You" "Lloviendo" Parodia "Bailando" Enrique Iglesias. Opening Ceremony Blog Exclusive - Spike Jonze Presents: Lil Buck and Yo-Yo Ma. ON TOP OF THE WORLD. Misty Copeland - I WILL WHAT I WANT. The Jive Aces present: Bring Me Sunshine.

This Sweet Video of People Dancing Naked in Public Will Charm Your Pants Off. Who feels like getting naked and dancing through the strees of Los Angeles? 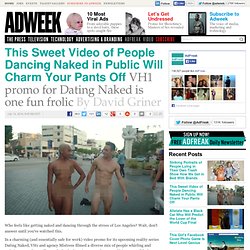 At the end, shoes fly. 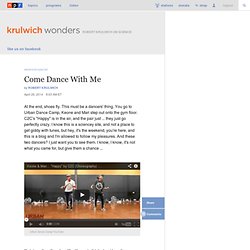 This must be a dancers' thing. You go to Urban Dance Camp, Keone and Mari step out onto the gym floor. C2C's "Happy" is in the air, and the pair just ... they just go perfectly crazy. Aloe Blacc - Wake Me Up. Bobby McFerrin 14 Tchaikovsky Andante Cantabile for Cello and String Orchestra, Op. Posthumous. South by Southwest: Meet Shelby Earl, the singer you need to know. The big names performing at this year’s South by Southwest festival in Austin, Texas, include Lady Gaga, Kanye West and Jay Z and Coldplay — not exactly scrappy upstarts looking to break through. But even as well-established acts siphon off some of the buzz SXSW generates (Prince and Justin Timberlake played last year, and Bruce Springsteen performed the year before that), there’s no shortage of opportunities to discover new artists. Take Shelby Earl, for example. Since quitting a corporate gig at Amazon a few years ago to make music full time, the Seattle singer and songwriter has released a pair of albums, including last year’s excellent “Swift Arrows.”

They’re pop albums, in the sense that Earl has a way with melodies that have a classic feel, but there’s nothing bubblegum about her. In fact, Earl is an optimist at heart, and it showed onstage Tuesday night when she played in the opening time slot for this year’s SXSW. New National Vid: Believe in Love & Dance Again. Sky Ferreira - Sad Dream. Remember When Music Videos Used To Mean Something? Some Still Do. Slow-Motion Masterpiece Captures Bags of Spices Exploding in Time with Music. It’s only January 11th, and we’ve already found a piece of slow-motion cinematography that might just remain our favorite of 2014. Created as a commercial for Schwartz Flavour Shots, this slow-motion video dubbed “The Sound of Taste” is a beautiful combination of cinematography and pyrotechnics that creates what filmmaker Chris Cairns calls “an audiovisual feast.”

To create this ‘feast,’ Cairns was joined by musician MJ Cole and pyrotechnician Paul Mann. Together, they set about deciding how to best put together a half-visual, half-auditory symphony that would perfectly capture what it is like to experience tasting something. What they settled on was a commercial that would show clouds of spices exploding into the air in slow-motion, perfectly synchronized to the music Cole had written. Here’s a behind the scenes video describing the process: What does flavour look like?

Yesterday we said that if ever a video deserved the title of “mesmerizing,” Adam Magyar’s Stainless videos were it. A 20-Something Guy Goes On And On About Sex For 6 Minutes. Nails It. Caravan Palace - Jolie Coquine [CLIP] Making a Scene: 11 Performances - Video. 114 million views and counting: What Does The Fox Say is this year’s Gangnam Style. Sometimes, it’s hard to predict what viral videos will pop big and then fade out, and which will become 100 million juggernauts that show little sign of slowing down. But one clear constant has always been the combination of music and comedy. Finding that out most recently is Ylvis, the Norwegian comedy/music duo who have, since blowing up last month, since racked up over 114 million views for their breakout video What Does The Fox Say?

, which blends dance beats with silly animal noises. While Ylvis is technically no one-hit wonder — the brothers Bård Ylvisåker and Vegard Ylvisåke have been popular in their native land for years — the song has launched them internationally, even landing them on the iTunes music charts (What Does The Fox Say? Is currently the #5 top-selling single in the United States). And what’s changed from the early days of comedy/music hybrids, he says, is interactivity. Because key to What Does The Fox Say? Iyeoka - Simply Falling. Danse_des_heures_Liceu.avi. 2012 APAP Presentation at Peridance Capezio Center.

The Staves - Winter Trees. Maude Maggart, "A Room With a View" Skylark (1941) - Maude Maggart w/Jamie Cullum. Fiona Apple and Maude Maggart - It's Only A Paper Moon. How much do cats actually kill? [Infographic] YouTube. Wolf Larsen - VIDEO - If I Be Wrong. YouTube. Kishi Bashi- Bright Whites (OFFICIAL VIDEO) Landfill Harmonic: Recycled Orchestra movie trailer tells incredible story. (VIDEO) Above is a teaser trailer for the documentary Landfill Harmonic, about “Los Reciclados,” or “The Recycled Orchestra,” part of a youth music program in Paraguay. Los Reciclados are from Cateura, a poor city that houses “the final dumping site for more than 1,500 tons of solid waste each day.” Alejandra Nash and Juliana Penaranda-Loftus have been working on the movie for the last two years, following three members of the orchestra in particular.