Sam Smith - I'm Not The Only One 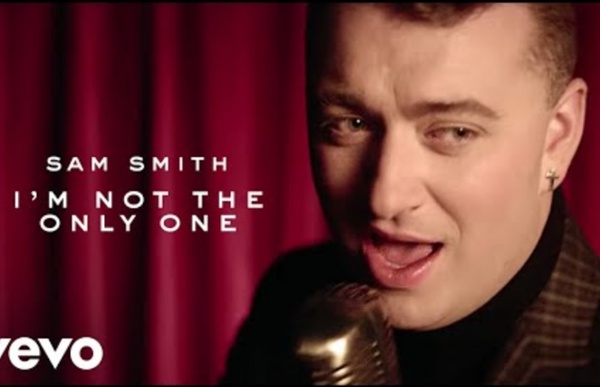 Video: She & Him cover Dusty Springfield The lovely and talented duo of She & Him, aka M. Ward and Zooey Deschanel, bring their 1960s AM-radio joy to the Dusty Springfield tune "Stay Awhile." It's from their forthcoming covers LP, titled Classics. Sister Rosetta Tharpe Sister Rosetta Tharpe (March 20, 1915 – October 9, 1973) was an American singer, songwriter, guitarist and recording artist. A pioneer of twentieth-century music, Tharpe attained great popularity in the 1930s and 1940s with her gospel recordings that were a unique mixture of spiritual lyrics and rhythmic/early rock accompaniment. She became gospel music's first crossover artist and its first great recording star, referred to later as "the original soul sister".[1][3][4] She was an early influence on figures such as Little Richard, Johnny Cash, Elvis Presley and Jerry Lee Lewis.[5]

Listen to the Mash-Up T-Swift Is ‘Obsessed’ With A couple of days before Christmas, singer-songwriter Louisa Wendorff posted a cover mash-up of Taylor Swift's 1989 hits "Blank Space" and "Style" on her YouTube page. A couple of days after Christmas, Swift discovered it, gave the video her stamp of approval, and, consequently, made Wendorff's holiday. In the clip (below), Wendorff and fellow Nashville-based songwriter Devin Dawson stand back-to-back, playing both songs unplugged and crafting a unique boy-girl love song all their own.

Lizzy Caplan sings "You Don't Know Me" In this clip from the first season of Showtime drama Masters of Sex, Freaks and Geeks and Party Down actor Lizzy Caplan sings a cover of the tune most popularized by Ray Charles. The show is a loose account of the groundbreaking sex study conducted by Dr. William Masters and Virginia Johnson. It's a supremely well-acted period piece, with a number of excellent performances including Beau Bridges and The West Wing's Allison Janney as a husband and wife dealing with his closeted homosexuality. Michael Sheen's intense and emotional work as Masters creates a compelling portrait of a character who could easily be an unlikable wretch in the hands of a lesser actor, and Caplan is tremendous as Johnson, radiating both warmth and steely determination as a woman with modern ideas on relationships trying to get by and get ahead at equal turns while encountering the medical field's glass ceiling and society's objectifying glare. or digital download.

10 queer rappers you should be listening to instead of Eminem In recent weeks, critics have rightly lambasted Eminem for the homophobic content of his latest album, “Marshall Mathers LP 2.” The rapper has been criticized in the past for continuing to using the word “faggot” in his music, and on the recently released “Rap God,” he also uses “gay-looking” as an insult. However, Slim Shady defended himself last week in an interview with Rolling Stone, in which he states that those words mean something different to him. “Gay” doesn’t denote “homosexual;” he claims it’s more like “calling someone a bitch or a punk or asshole.” Eminem will continue to be skewered for his stance, but he has shown he’s unlikely to listen to his critics. So instead of giving him more attention, here’s another solution: Stop listening to him.

Choros: A Transfixing Experimental Dance Film by Michael Langan & Terah Maher Released three weeks ago after a year on tour at various film festivals, {*style:<a href=' is the latest experimental art film from director {*style:<a href=' Langan{*style:</a>*} the explores the movement of the human body, specifically the motion of dancer {*style:<a href=' Maher{*style:</a>*}. Choros follows in the steps of Eadweard Muybridge, Etienne-Jules Marey, and Norman McLaren, all of whom spent years studying the physical moment of animals and humans through film. Langan takes the next step using new digital innovations to layer some 32 sequential instances of a single movement and then stretch it out over time. Set to Steve Reich’s {*style:<a href=' for 18 Musicians{*style:</a>*}, the 13-minute video is pulsating, hypnotic, and flat out lovely to watch.

Slow Club: Two Cousins A new video for Slow Club from their forthcoming album out in September, featuring dancers Ryan Francois and Remy Kouame performing an homage to dancers Al Minns and Leon James. The music in no way “matches” the dancing, and yet creates such a beautiful juxtaposition. (via cliptip) A Sultry New Dance Video for OK Go’s ‘Skyscrapers’ Another day, another wonderful music video by OK Go. This new video for Skyscrapers features a sultry montage of dance moves through a series of colorful urban backdrops. The clip was directed and produced by Grammy Award-winning choreographer and director Trish Sie (the lady above) paired with Moti Buchboot. More than many of OK Go’s songs lately, I’m really enjoying this one and might have to pick it up.

Waltz on the Walls: An Aerial Dance Performance on the Side of Oakland’s City Hall This surprisingly lovely dance performance was filmed vertically on the side of Oakland’s 18-story City Hall building earlier this month at the Art + Soul Festival. The dancers are Amelia Rudolph and Roel Seeber from Bandaloop. (via The Awesomer)

Come Dance With Me : Krulwich Wonders... At the end, shoes fly. This must be a dancers' thing. You go to Urban Dance Camp, Keone and Mari step out onto the gym floor. C2C's "Happy" is in the air, and the pair just ... they just go perfectly crazy. I know this is a sciencey site, and not a place to get giddy with tunes, but hey, it's the weekend, you're here, and this is a blog and I'm allowed to follow my pleasures. And these two dancers?

South by Southwest: Meet Shelby Earl, the singer you need to know The big names performing at this year’s South by Southwest festival in Austin, Texas, include Lady Gaga, Kanye West and Jay Z and Coldplay — not exactly scrappy upstarts looking to break through. But even as well-established acts siphon off some of the buzz SXSW generates (Prince and Justin Timberlake played last year, and Bruce Springsteen performed the year before that), there’s no shortage of opportunities to discover new artists. Take Shelby Earl, for example.