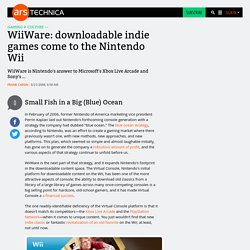 " The blue ocean strategy, according to Nintendo, was an effort to create a gaming market where there previously wasn't one, with new methods, new approaches, and new platforms. This plan, which seemed so simple and almost laughable initially, has gone on to generate the company a ridiculous amount of profit, and the various aspects of that strategy continue to unfold before us. WiiWare is the next part of that strategy, and it expands Nintendo's footprint in the downloadable content space. The one readily-identifiable deficiency of the Virtual Console platform is that it doesn't match its competitors—the Xbox Live Arcade and the PlayStation Network—when it comes to unique content. 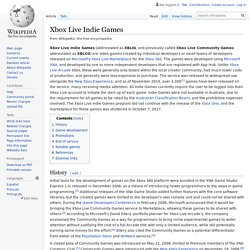 The games were developed using Microsoft XNA, and developed by one or more independent developers that are registered with App Hub. Unlike Xbox Live Arcade titles, these were generally only tested within the local creator community, had much lower costs of production, and generally were less expensive to purchase. The service was released to widespread use alongside the New Xbox Experience, and as of November 2014[update], over 3,300[1] games have been released on the service, many receiving media attention. All Indie Games currently require the user to be logged into their Xbox Live account to initiate the start-up of each game.

History[edit] Indie or Mainstream? Tensions and Nuances between the Alternative and the Mainstream in Indie Games. The PDF file you selected should load here if your Web browser has a PDF reader plug-in installed (for example, a recent version of Adobe Acrobat Reader). 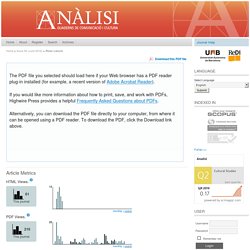 If you would like more information about how to print, save, and work with PDFs, Highwire Press provides a helpful Frequently Asked Questions about PDFs. Alternatively, you can download the PDF file directly to your computer, from where it can be opened using a PDF reader. To download the PDF, click the Download link above. Fullscreen Fullscreen Off Article Metrics 61This journal 210This journal Metrics powered by PLOS ALM Copyright (c) 2016. Is Every Indie Game Independent? Towards the Concept of Independent Game. By Maria B. 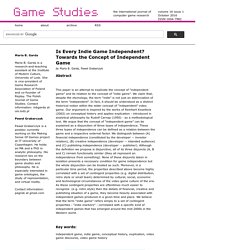 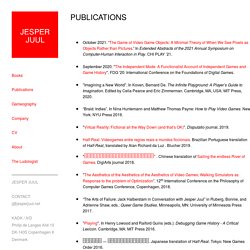 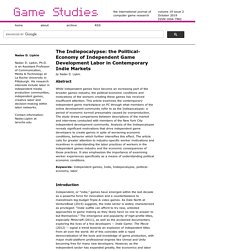 Lipkin Abstract While independent games have become an increasing part of the broader games industry, the political-economic conditions and motivations of the workers creating these games has received insufficient attention. This article examines the contemporary independent game marketplace on PC through what members of the online development community refer to as the Indiepocalypse: a period of economic turmoil presumably caused by overproduction.

The study draws comparisons between descriptions of the market and interviews conducted with members of the New York City independent development community. High-tech Low-tech Authenticity: The Creation of Independent Style at the Independent Games Festival. Juul, Jesper. 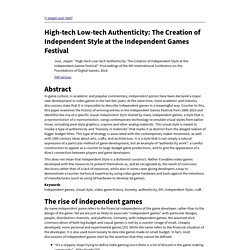 "High-tech Low-tech Authenticity: The Creation of Independent Style at the Independent Games Festival". Proceedings of the 9th International Conference on the Foundations of Digital Games, 2014. Pdf version. What makes a game indie: a universal definition - SinisterDesign.net. What is Indie? Back in the early '90s, the definition of 'indie' music went under a transformation. 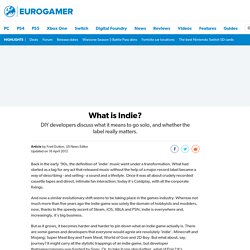 What had started as a tag for any act that released music without the help of a major record label became a way of describing - and selling - a sound and a lifestyle. Once it was all about crudely recorded cassette tapes and direct, intimate fan interaction; today it's Coldplay, with all the corporate fixings. And now a similar evolutionary shift seems to be taking place in the games industry. View of Indie Eh? Some Kind of Game Studies. Parker, Felan Indie Gaming. View of Examining Indie's Independence: The Meaning of "Indie" Games, the Politics of Production, and Mainstream Cooptation. The History of Indie Games. Ben Wander on leaving AAA behind, and the challenges of indie development. 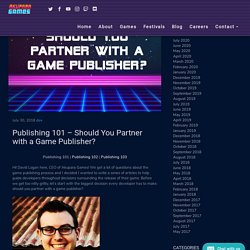 David Logan here, CEO of Akupara Games! We get a lot of questions about the game publishing process and I decided I wanted to write a series of articles to help guide developers throughout decisions surrounding the release of their game. Before we get too nitty gritty, let’s start with the biggest decision every developer has to make: should you partner with a game publisher? Akupara Games is a video game publisher, so it is no secret that we believe publishers can bring value to a lot of games, however that doesn’t always mean that a publisher is right for you.

In this article, I will be going over the services and benefits a publisher provides – such as distribution, development support, marketing, and community building. Publishers are a business too, and have various ways of recouping their costs and making money. Gross Income vs. Revenue share agreements will specify between sharing Gross Income or Net Income. Share Percentages. Indie vs Game Publisher: Do Game Developers Need Publishers. May 15 2020 So you have an idea for a game that could possibly go really viral in the market. 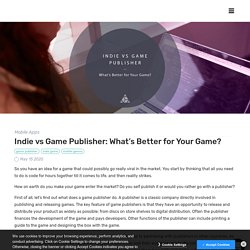 You start by thinking that all you need to do is code for hours together till it comes to life, and then reality strikes. How on earth do you make your game enter the market? Do you self publish it or would you rather go with a publisher? LGBTQ+ visual novels: The genre that's doing inclusivity right. Visual novels occupy an unusual space in the gaming industry — not quite like the conventional idea of a “game” but still part of the broad category of interactive media. Besides gameplay, they differ from the rest of the industry in the topics they cover. Visual novels tell stories about characters, as that’s more or less all the medium will allow. The 7 Stages of Game Development. Most people who design and build video games for a living will tell you that game development is never as pretty as planned. Impending deadlines, bottlenecks in production, pressure from video game publishers, and endless work-weeks are just a few of the many challenges that arise during the development cycle.

However, the brave few that go into game development are aware of the culture and its habit of testing one’s grit and determination, but the drive to produce video games that look, feel, and play beautifully is what keeps them going. Many aren’t aware of this cycle of madness and its many stages, so I’m here to shed some light on game development. While video game development is chaotic in nature, there are still structures and frameworks in place to keep studios running efficiently and projects on track to be completed. Karl Kontus's Blog - Can you be a full time solo indie developer? Video game development. Process of developing a video game Mainstream commercial PC and console games are generally developed in phases: first, in pre-production, pitches, prototypes, and game design documents are written; if the idea is approved and the developer receives funding, then full-scale development begins. The development of a complete game usually involves a team of 20–100 individuals with various responsibilities, including designers, artists, programmers, and testers.

Braden River Library. The $120B Gaming Industry Is Being Built On The Backs Of These Two Engines. U.S. Video Game Content Generated $35.4 Billion in Revenue for 2019 - Entertainment Software Association. Washington, DC – January 23, 2020 – U.S. video game content generated $35.4 billion in revenue in 2019, a 2 percent increase over 2018*, according to new data released today by the Entertainment Software Association (ESA) and The NPD Group. This industry figure includes revenues from all software and in-game purchases, as well as U.S. mobile spend data. Sales gains were seen in full-game and DLC MTX digital content on console, as well as mobile and subscription spending, while physical content and PC digital content experienced declines. “The continued economic growth and impact of the industry illustrates what we in the industry see every day – more and more people of all ages and backgrounds love playing video games and are celebrating their unparalleled entertainment,” said ESA President and CEO Stanley Pierre-Louis.

. *2018 sales adjusted to include same number of tracking weeks in retail calendar year. 43+ Video Games Industry Statistics, Facts, and Trends for 2020. Hello, fellow gamers! Are you ready to pick up your sword/rifle/blaster/candy and join me on an adventure? 45+ Video Game Industry Revenue Statistics: Game On! What are the differences in working as a game developer in AAA studio and as indie developer? The major differences between 'indie' and 'AAA' video games. Despite the overwhelming library of titles available to gamers today, the vast majority of them can be surprisingly broken down into these two groups, based on their development.

Both styles are very different, ranging from price to graphical design and file size. This article aims to make the differences between the two clear. Stardew Valley - Press. Stardew Valley is an open-ended country-life RPG! You’ve inherited your grandfather’s old farm plot in Stardew Valley. Armed with hand-me-down tools and a few coins, you set out to begin your new life.

What Is Game Development?