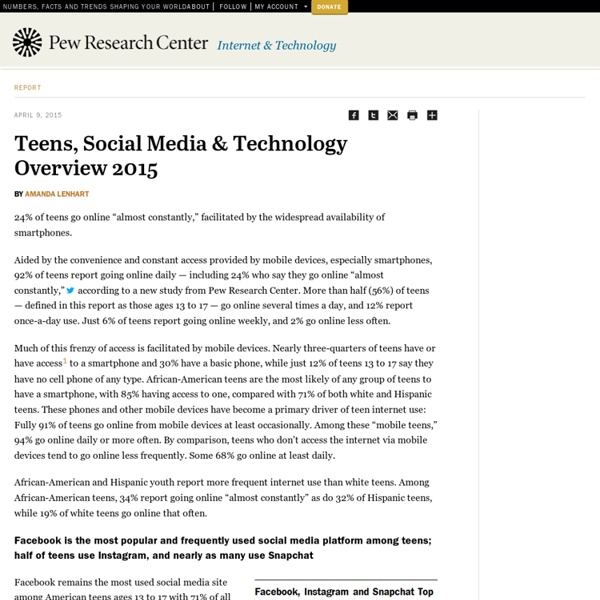 24% of teens go online “almost constantly,” facilitated by the widespread availability of smartphones. Aided by the convenience and constant access provided by mobile devices, especially smartphones, 92% of teens report going online daily — including 24% who say they go online “almost constantly,” according to a new study from Pew Research Center. More than half (56%) of teens — defined in this report as those ages 13 to 17 — go online several times a day, and 12% report once-a-day use. Just 6% of teens report going online weekly, and 2% go online less often. Much of this frenzy of access is facilitated by mobile devices. Nearly three-quarters of teens have or have access to a smartphone and 30% have a basic phone, while just 12% of teens 13 to 17 say they have no cell phone of any type. African-American and Hispanic youth report more frequent internet use than white teens. 71% of teens use more than one social network site Teens are diversifying their social network site use.

Ethan Czahor, Who Lost His Job for Offensive Tweets, Creates App Ethan Czahor’s dreams collapsed on the national stage earlier this year. The 31-year-old age digital whiz had spent years positioning himself to work in politics and earlier this year Jeb Bush’s campaign came calling, hiring Czahor as its chief technology officer. He lasted 36 hours, done in by a history of offensive tweets and blog posts that was uncovered by reporters and opposition researchers after TIME broke the news of his hire. Now, two months later, he is looking to make his comeback, turning lemons into lemonade with Clear, an app designed to keep what happened to him from happening to anyone else. “Why wasn’t I smart enough to take care of this before it happens,” Czahor asked himself for weeks after the controversy, he told TIME.

The Power of Audience I love YouTube. I bet you do too. I love being able to learn what I want to learn, when I want to learn and actually getting to see someone teaching the skill (instead of just having to read about it). The Future of Education According to Generation Z Alexandra Levit is a bestselling business and workplace author and journalist. Hailing from Chicago, IL, she helps organizations to connect with top talent and individuals to connect with engaging work. This isn’t his mother’s first-grade class. My son is 7 years old and attends a public school in Oak Park, Ill., just outside Chicago. Social Media, Mental Health and Teens - Sue Scheff BlogSue Scheff Blog Today almost everyone, not only teenagers, are connected to social media. A Pew Research Center study found that 92 percent of U.S. teenagers use social networks at least once a day, with 24 percent reporting that they are online “almost constantly.” Adults love their social media too.

Social Media and Persuasion – Great Expectations – in all things I asked a few students this month whether or not we should use social media in public relations work, and the response was fairly telling – “Why wouldn’t you use social media?! You have to use social media!” Even in 2016, such responses might be a bit debatable or examples of blind acceptance, but they also highlight the main advantage of using social media in a communication campaign – using social media is often considered a standard, and any time you’re not using a standard, you ought to have good reason. These new media are not just new forms of communication; Hayes, Hendrix, and Kumar (2013) say they are “technology that change the very nature of communication.”1 With such an inherent consideration of the impact of social media, we cannot ignore them when constructing a campaign, or when we are doing any sort of communication, really. Part of this same aspect is the “connection” ability of social media. Often, organizations do have policies for usage, though.

Tread very carefully ... you're leaving digital footprints Snap: Teenagers connect and express themselves via digital media but might be less conscious of how the footprint that follows their photos, videos and posts will affect them as adults. Pictures and comments posted online leave a public trail of digital footprints, and it can be extremely difficult, if not impossible, to remove the bits we don't want others to see. So how do we teach teenagers about maintaining a positive digital footprint when many don't seem to think beyond tomorrow? "They think they are impervious; it's hard for them to understand the concept of a digital dossier for life," Roland Gesthuizen, Digital Learning and Teaching Victoria vice-president and an e-learning teacher at Keysborough College in Melbourne, says.

The Real Me Who are you? How, when and where would I get to know who you are? Should I assume that it has to be “in person”? To be honest I kind of hope not, because that really limits the potential of the connections I can make. How To Teach Visual Thinking – 5 Strategies From Around The Web The misconceptions about visual thinking are alarming. On one hand, this critical skill seems integral for contemporary learning, since almost every modern input is visual in nature. Yet this key proficiency seems almost entirely absent from state standards and daily classroom lessons. Is visual thinking just a polite nod to Howard Gardner's quaint modalities? Or is it a genuine habit of learning that unites the external codes of pictorial metaphor and digital imagery into a seasoned curriculum of higher-level interpretation?

Stop Uploading PDF’s and Digital Worksheets I have received several tweets about how cumbersome it is to have students work with PDF’s in a digital format. I am going to be blunt, uploading your worksheets to PDF’s and putting them online is not a 21st century lesson. This is substitution on the SAMR model. 5 top-notch social networks that aren't Facebook or Twitter There are plenty of ways to engage with a community, learn online, or simply discover what's happening around you. Did you know there are ways to do that without having to use Facebook or Twitter, though? Created by LearningFeed Admin posted on , updated on Tumblr Instructional Technology Web 2.0 Tools HCPS-Approved Web 2.0 Tools With the growth of the internet, it is extremely important that we utilize Web 2.0 tools which are safe for our HCPS students. In order to help facilitate the safe use of these internet resources, we have compiled a list of tools which may be used for classroom curricular purposes. We have also highlighted those policies and forms which MUST be considered PRIOR to using these wonderful resources. Remember that our primary goal is to keep students safe while they are learning.

10 Social Media Skills for Every Modern Teacher [Infographic] Social media skills have an increasingly useful presence in modern classrooms. Teachers and students alike use them to connect and to expand learning. Social media doesn’t have to be a distraction. It can be a powerful learning tool if used properly. This begins with our most powerful classroom tool. How to See Everything You've Ever Googled Via NZ Herald You probably don’t remember what you Googled 10 minutes ago, let alone the myriad inane and fleeting things you’ve searched since the engine’s beginnings. But unless you’re browsing in incognito mode or have tweaked your account settings, Google remembers those things. Not only that: Google logs all of your searches, analyses them, and uses them to individually personalise the search results you see – which has pretty profound implications for both literacy and privacy. Now, the search giant has created a way for users to better understand that process.