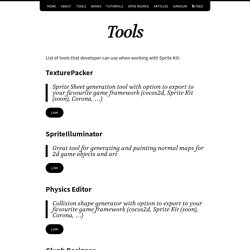 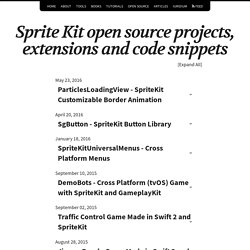 Access it by clicking the link below... Link to GitHub Top of page SgButton - SpriteKit Button Library Nice open source SpriteKit button library written in Swift. Link to GitHub SpriteKitUniversalMenus - Cross Platform Menus SpriteKit menus that works on iOS (tap and gamecontrollers), tvOS (focus engine and gamecontrollers) and MacOS (click, keyboard and gamecontrollers). Link to GitHub DemoBots - Cross Platform (tvOS) Game with SpriteKit and GameplayKit DemoBots is a fully-featured 2D game built with SpriteKit and GameplayKit, and written in Swift 2.0 that is made to work on all Apple platforms, including tvOS. iOS Swift Tutorials by Jameson Quave. This is part of a series of tutorials introducing new features in iOS 10, the Swift programming language, and the new XCode 8 beta, which were just announced at WWDC 16 UIKit in iOS 10 now has “new object-based, fully interactive and interruptible animation support that lets you retain control of your animations and link them with gesture-based interactions” through a family of new objects and protocols. 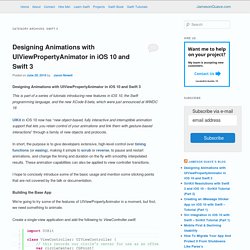 In short, the purpose is to give developers extensive, high-level control over timing functions (or easing), making it simple to scrub or reverse, to pause and restart animations, and change the timing and duration on the fly with smoothly interpolated results. These animation capabilities can also be applied to view controller transitions. I hope to concisely introduce some of the basic usage and mention some sticking points that are not covered by the talk or documentation. Building the Base App Create a single-view application and add the following to ViewController.swift. About Durations. Online Courses in Web Development, Mobile Development, and Design. Craiggrummitt/ActionSwift3. Code.tutsplus. SpriteKitAlliance/SKAToolKit: Tool Kit to make Apple's Sprite Kit easier to use. 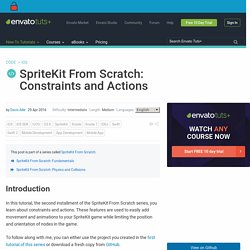 These features are used to easily add movement and animations to your SpriteKit game while limiting the position and orientation of nodes in the game. To follow along with me, you can either use the project you created in the first tutorial of this series or download a fresh copy from GitHub. The graphics used for the game in this series can be found on GraphicRiver. GraphicRiver is a great source for finding artwork and graphics for your games. Before we can start adding constraints and actions to a scene, we first need to create a few classes so that we can work with our nodes in code. If Xcode throws an error after creating the class, add an import statement for the SpriteKit framework below the import UIKit statement: Next, declare the following three properties in the PlayerNode class. At the top, add an import statement for the SpriteKit framework. 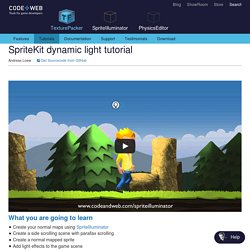 The sprites are located in LightingDemo/LightingDemo/Sprites. The easiest way to create normal maps for your sprites is to use SpriteIlluminator. Drag + drop your sprites on the SpriteIlluminator window Select all sprites Apply Bevel and Emboss effects Publish the normal map images to the sprite directory, using the _n suffix In the GitHub repository, you'll find a file called spriteilluminator-project.sip. The project also contains pre-built normal maps for this tutorial. Setup your SpriteKit project Simply create a new empty SpriteKit project for iOS devices. Configure the project's Device orientation as Landscape right.

Frisp Games. One way I have found that works well for marketing a game is to give players the ability to share a screenshot of their score on Twitter or Facebook. 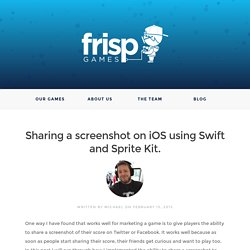 It works well because as soon as people start sharing their score, their friends get curious and want to play too. In this post I will run through how I implemented the ability to share a screenshot to Twitter or Facebook using Swift and Sprite Kit.