Africa's first start-up bus hits the road. 28 November 2013Last updated at 19:18 ET By Salome van Zyl Johannesburg Of the 30 entrepreneurs on the bus, 15 were from Africa and 15 were from the rest of the world Imagine a bus, jam-packed with uber-geeks from different countries, taking on a four-day brainstorming marathon across Southern Africa. 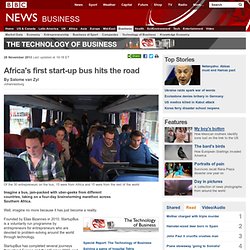 Well, imagine no more because it has just become a reality. 5 Top Industries to Start-up a new company in South Africa. By Stephanie Marz | 02 June 2014 With the talk of starting up a small business being the way of the future, being or at least entering the entrepreneurial world in South Africa has become a big topic of interest. 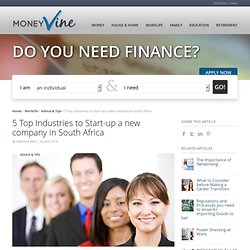 Keeping to grips with modernisation, people looking to start-up a new business have to-do the ground work that involves researching the ‘un-tapped’ markets, what has been seen and done and what industries are evidently lacking or not exposed enough in South Africa. By focusing industries that opens the gap to new companies could give light to markets that not reached its full potential and directly address the country’s continuous socioeconomic issues such as unemployment. South Africa enters economic deep freeze. Winter arrived in South Africa this week, covering hills and highlands with snow in a fittingly chill metaphor for an economy beset by everything from labour unrest and flat-lining output to rising inflation and waning external confidence. 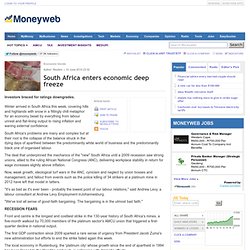 South Africa's problems are many and complex but at their root is the collapse of the balance struck in the dying days of apartheid between the predominantly white world of business and the predominantly black one of organised labour. The deal that underpinned the mechanics of the "new" South Africa until a 2009 recession saw strong unions, allied to the ruling African National Congress (ANC), delivering workplace stability in return for wage increases slightly above inflation. Now, weak growth, ideological turf wars in the ANC, cynicism and neglect by union bosses and management, and fallout from events such as the police killing of 34 strikers at a platinum mine in 2012 have left that model in tatters. "We've lost all sense of good-faith bargaining. SA vineyards make African inroads.

SOUTH African wine producers are trying to capitalise on the booming middle-class market in Africa. 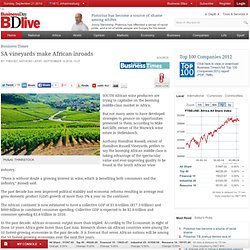 But not many seem to have developed strategies to pounce on opportunities presented to them, according to Mike Ratcliffe, owner of the Warwick wine estate in Stellenbosch. Anthony Hamilton Russell, owner of Hamilton Russell Vineyards, prefers to say the booming African middle class is taking advantage of the spectacular value and ever-improving quality to be found in the South African wine industry. West Africa’s oil and gas industry lures Cape Town fabricator - Cape Business News. “Securing a substantial fabrication contract in Ghana for Subsea 7 is the entrée into establishing a fully-fledged fabrication subsidiary to service the oil and gas industry in West Africa”, managing director of Bellville based Belmet Marine and Engineering, declared, Pieter Kroon, declared. 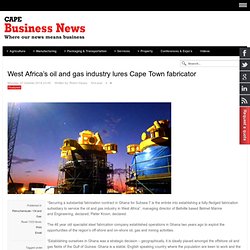 The 46 year old specialist steel fabrication company established operations in Ghana two years ago to exploit the opportunities of the region’s off-shore and on-shore oil, gas and mining activities. “Establishing ourselves in Ghana was a strategic decision – geographically, it is ideally placed amongst the offshore oil and gas fields of the Gulf of Guinea. Ghana is a stable, English speaking country where the population are keen to work and the government welcomes foreign investment with a minimum of red tape, realising that establishing new industries contributes to the nation’s development and economy by creating jobs and acquiring skills,” explained Kroon. South Africa Legalises Drones. SA-West Africa multi-purpose trade expected to grow in 2015 - Cape Business News. According to SafmarineMPV’s James Lewer, “Intra-Africa trade of value-added, manufactured goods has grown faster than African exports to the rest of the world, according to a recent Economic Outlook Report published by the African Development Bank, OECD Development Centre and United Nations Development Programme (UNDP.) 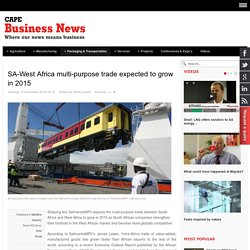 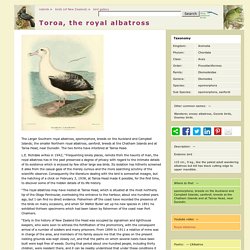 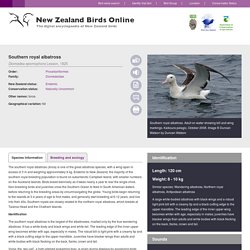 Endemic to New Zealand, the majority of the southern royal breeding population is found on subantarctic Campbell Island, with smaller numbers on the Auckland Islands. Birds breed biennially as it takes nearly a year to rear the single chick. Non-breeding birds and juveniles cross the Southern Ocean to feed in South American waters before returning to the breeding areas by circumnavigating the globe. Young birds begin returning to the islands at 3-4 years of age to find mates, and generally start breeding at 6-12 years, and live into their 40s. Southern royal albatross – Albatrosses. Southern royal albatrosses are the largest albatrosses, with males weighing on average 10.3 kilograms and females 7.7 kilograms. 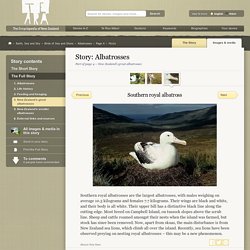 Their wings are black and white, and their body is all white. Their upper bill has a distinctive black line along the cutting edge. Most breed on Campbell Island, on tussock slopes above the scrub line. Sheep and cattle roamed amongst their nests when the island was farmed, but stock has since been removed. RoyalAlbatrossCentre. Lloyd's building. A week-end in my town !- Anglais LP.

<> Towering achievement The City of London maintains five Thames bridges including the world-famous Tower Bridge and iconic Millennium Bridge Green space in London Find our green spaces in London including Hampstead Heath, Epping Forest, Burnham Beeches and over 200 parks and gardens in the Square Mile Schools in the City Sir John Cass Primary School - one of the leading primary schools in the capital Leisure in the City Golden Lane Sport & Fitness is one in a range of leisure options available in the Square Mile Monument The City of London maintains one of the City’s best-loved attractions City Planning Leading the way with urban planning The global business City The City is the world’s leading centre for international financial services and business Featured sections Don’t miss... 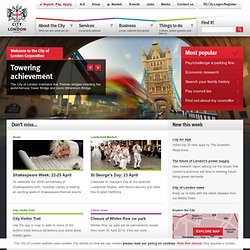 Streetworks ​We aim to plan proposed works carefully to keep disruptions to a minimum. Official Website for Tickets & Information. Big Ben strikes 12. Big Ben. London's Big Ben - - the story of a London icon. The Houses of Parliament's iconic clock tower is one of London's most famous landmarks. Don't leave London without visiting Big Ben! The Houses of Parliament and Elizabeth Tower, commonly called Big Ben, are among London's most iconic landmarks. Technically, Big Ben is the name given to the massive bell inside the clock tower, which weighs more than 13 tons (13,760 kg). Why everyone should visit London at least once in their lifetime.

So perhaps you’re not much of a traveller. Whether your budget’s too tight for regular trips away or you’re just a homebody by nature, there’s at least one trip you need to make, and that’s to the country’s capital. London is a city unlike any other in the world, so why not book at room in one of our London hotels for a long weekend? Here are 6 reasons why everyone needs to go to London at least once: 1) The Famous Sights Big Ben, the Tower of London, Buckingham Palace, the London Eye… The list goes on and on. 2) The Shopping.

A New Form Has Been Discovered in Sacred Geometry — Meet The Chestahedron. Apparently the heart doesn’t pump blood but is the vortex regulator of the blood as the blood flows through the arteries and veins. A 300 Million Year Old Screw Has Researchers Baffled. There are numerous archaeological discoveries that science cannot understand, we have come across countless findings that have ended up as being just that, findings that have caught the attention of researchers, but have yet to be accurately explained. In this case we have a screw that according to researchers is 300 million years old, and like many awkward discoveries in the past, it was found in Russia in the 90’s. Russian scientists found it by chance actually, as they were performing analysis after the fall of a meteorite in the Kaluga region when they came across a mysterious object that resembled a modern-day screw.