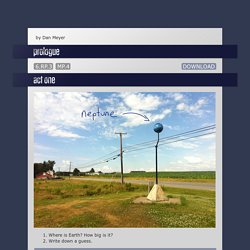 Where is Earth? Act two 3. Act three Lesson content CC BY-NC 3.0 Dan Meyer. Our Cosmic Address. Our Cosmic Address The current way of thinking about Earth's place in the Universe is not to put it on a two- or three-dimensional map of some kind, but rather to envision its place in a nested hierarchy of structures.This way of thinking about "where we are" is directly analogous to an address on an envelope: each line is a larger structure which contains the item in the previous line. 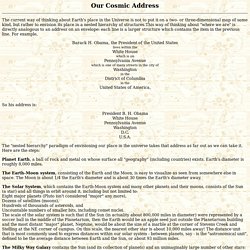 For example, Barack H. Obama, the President of the United Stateslives within theWhite Housewhich is onPennsylvania Avenuewhich is one of many streets in the city ofWashingtonin theDistrict of Columbiain theUnited States of America, So his address is: President B. The "nested hierarchy" paradigm of envisioning our place in the universe takes that address as far out as we can take it. Planet Earth, a ball of rock and metal on whose surface all "geography" (including countries) exists. Earth's new address: 'Solar System, Milky Way, Laniakea' The supercluster of galaxies that includes the Milky Way is 100 times bigger in volume and mass than previously thought, a team of astronomers says. 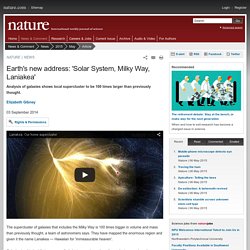 They have mapped the enormous region and given it the name Laniakea — Hawaiian for 'immeasurable heaven'. Galaxies tend to huddle in groups called clusters; regions where these clusters are densely packed are known as superclusters. But the definition of these massive cosmic structures is vague. The new study, published in Nature1, describes a novel way to define where one supercluster ends and another begins. A team led by Brent Tully, an astronomer at the University of Hawaii in Honolulu, charted the motions of galaxies to infer the gravitational landscape of the local Universe, and redraw its map. Cosmic speed. If the Moon Were Only 1 Pixel - A tediously accurate map of the solar system. Mercury Venus Earth You Are Here Moon Mars Jupiter Io Europa Ganymede Callisto Saturn Titan Uranus Neptune Pluto(we still love you) That was about 10 million km (6,213,710 mi) just now.

Pretty empty out here. Here comes our first planet... As it turns out, things are pretty far apart. We’ll be coming up on a new planet soon. Most of space is just space. Cosmos: A Space Time Odyssey. Why Pluto is No Longer a Planet. This article was originally written in 2008, but we created a cool video to go along with it yesterday Let’s find out why Pluto is no longer considered a planet. 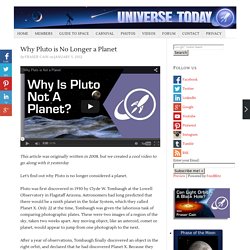 Pluto was first discovered in 1930 by Clyde W. Tombaugh at the Lowell Observatory in Flagstaff Arizona. Astronomers had long predicted that there would be a ninth planet in the Solar System, which they called Planet X. Only 22 at the time, Tombaugh was given the laborious task of comparing photographic plates. The Solar System now had 9 planets. Astronomers weren’t sure about Pluto’s mass until the discovery of its largest Moon, Charon, in 1978. Over the last few decades, powerful new ground and space-based observatories have completely changed previous understanding of the outer Solar System. Astronomers estimate that there are at least 70,000 icy objects, with the same composition as Pluto, that measure 100 km across or more in the Kuiper Belt. Here’s the problem. Astronomy Discoveries Bill Nye.

Secrets of the Sun Nova (National Geographic HD) Secrets of the Sun. Secrets of the Sun PBS Airdate: April 25, 2012 NARRATOR: It's an alien landscape, where magnetic tornadoes twist upward, tens of thousands of miles; mysterious dark spots, large enough to engulf the earth, ebb and flow; and violent eruptions shoot tons of charged particles into space, at speeds of over 2,000,000 miles per hour. 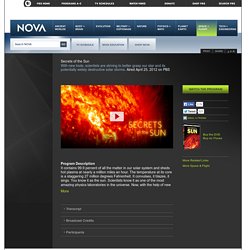 This is not some strange world on the other side of the galaxy. This is our sun. And now, new technologies are allowing us to see it like never before. Satellites are giving investigators new insights into centuries old mysteries. HOLLY GILBERT (NASA Goddard Space Flight Center): That is really a quantum leap in solar physics, a continuous eye on the sun.

NARRATOR: How does our sun work? BILL MURTAGH (National Oceanic and Atmospheric Administration Space Weather Center): Repair could take weeks, months and even, worse case scenario, up to 10 years for a full recovery. A Traveler's Guide to the Planets. A Traveler's Guide to the Planets. New Solar System documentary The Sun Full HD 1080p, Amazing+ Documentary. If My Friends From Montana See This, I’ll Never Hear The End Of It. Asteroid Watch. Rosetta's Target Comet is Becoming Active The target of ESA's Rosetta mission has started to reveal its true personality as a comet, its dusty veil clearly developing over the past six weeks. › Read more (May 15, 2014) › More news Average distance between Earth and the moon is about 239,000 miles (385,000 kilometers). 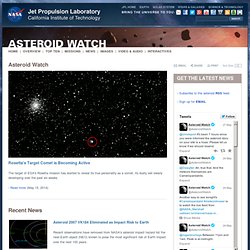 The Asteroid Watch Widget tracks asteroids and comets that will make relatively close approaches to Earth. The Widget displays the next five Earth approaches to within 4.6 million miles (7.5 million kilometers or 19.5 times the distance to the moon); an object larger than about 150 meters that can approach the Earth to within this distance is termed a potentially hazardous object.

If the Moon Were Only 1 Pixel - A tediously accurate map of the solar system. Milankovitch Cycles.