Hello, This Video Of A Snake Throwing Up Another Live Snake Will Fuuuuck You Up. Bicycles Built Based on People’s Attempts to Draw Them From Memory. Visual Artist Pierre Jean-Louis Makes Black Women's Hair Even More Beautiful. While black women still sometimes face ridicule for rocking natural styles, there's no denying that more and more are now unapologetically embracing their God-given tresses, regardless of what others may think. 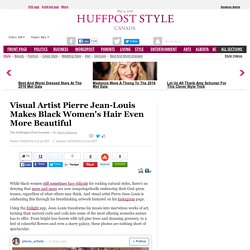 And visual artist Pierre Jean-Louis is celebrating this through his breathtaking artwork featured on his Instagram page. Using the Enlight app, Jean-Louis transforms his muses into marvelous works of art, turning their natural curls and coils into some of the most alluring sceneries nature has to offer. From bright hue forests with tall pine trees and stunning greenery, to a bed of colourful flowers and even a starry galaxy, these photos are nothing short of spectacular.

"I started creating these beautiful pictures last year around September when I started following some amazing accounts on Instagram [which have] nothing but beautiful black queens rocking their natural hair," the New York/New Jersey/Philadelphia-based artist told HuffPost Black Voices via email. Eyes as Big as Plates. 27 Pictures Guaranteed To Fulfill Needs You Didn’t Know You Had. Teenage Inventors Just Made Trips to the Bathroom Much Less Gross. 26 Photos That Every Perfectionist Will Find Pleasing. Satisfying Pictures of Found Objects Matched with their Pantone Color. Humans can detect about 10 million unique colors, but how often do we really think about the hues we see? 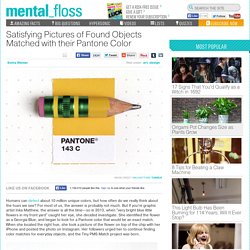 For most of us, the answer is probably not much. But if you're graphic artist Inka Matthew, the answer is all the time—so in 2013, when "very bright blue little flowers in my front yard" caught her eye, she decided investigate. She identified the flower as a Georgia Blue, and began to look for a Pantone color that would be an exact match. When she located the right hue, she took a picture of the flower on top of the chip with her iPhone and posted the photo on Instagram. Her followers urged her to continue finding color matches for everyday objects, and the Tiny PMS Match project was born. None of the colors are adjusted in post-production—the matches are found using natural daylight to ensure their accuracy.

Next Spring, the Tiny PMS Match Project will be published as a hard cover by Abrams Books. "A teeny weeny strawberry. "Guinea Fowl feather. "Minion TicTacs!!! Here's A Gorgeous Petri Dish Handprint Of An 8-Year-Old After He Played Outside. World's biggest ant hill. Can You Make It Through This Post Without Your Brain Melting. 14 Cakes Inspired By Scientific Concepts. We already featured anatomical cakes , which are great for anyone obsessed with biology, but if you’re interested in any other scientific fields, don’t worry—there are plenty of cakes for you too. From geology to physics, we’ve got all sorts of scientifically-inspired confections to satisfy your educated sweet tooth. 1. Earth’s Internal Structure The realistic depiction of our planet's landmasses on this cake is pretty impressive—but the realism doesn't stop there. Slice the cake open, and it reveals the interior composition of the Earth’s core. 2. Here’s another tasty treat showing what’s underneath the surface of our planet—only this time, the cake focuses on the immediate layers of sediment just below our feet. 3.

It would be easy to make cake pops representing the solar system. 4. Ain’t no party like a NASA party cause a NASA party features cakes that show active regions of the sun in multi wavelengths! 5. 6. 7. 8. 9. 10. 11. 12. Photo courtesy of Rosanne Cook 13. 14. Teen Speaks 20 Languages. The Periodic Table of the Muppets. A comprehensive depiction of many memorable Muppet characters from throughout the years (and some not-so-memorable ones as well). 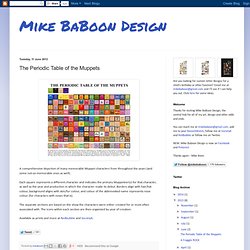 Each square represents a different character and indicates the primary Muppeteer(s) for that character, as well as the year and production in which the character made its debut. Borders align with hair/hat colour, background aligns with skin/fur colour, and colour of the abbreviated name represents nose colour (for characters with noses that is). The separate sections are based on the show the characters were either created for or most often associated with. The icons within each section are then organized by year of creation. Available as prints and more at Redbubble and Society6.