Lionel Fanthorpe Introduction Page. If I were to ask you to guess the Science-Fiction author who produced the most content in the shortest amount of time, who would you guess? 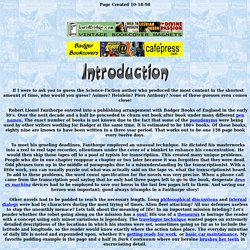 Asimov? Heinlein? Piers Anthony? None of those guesses even comes close! To meet his grueling deadlines, Fanthorpe employed an unusual technique. Other novels had to be padded to reach the necessary length. But despite all these faults, Fanthorpe managed to include his own positive world-view into even the darkest story. Badger Books would send Fanthorpe a cover painting, often the more lurid the better (see the Cover Gallery for examples). On several occasions the cover art used on a Badger was originally published on another book. What does Fanthorpe think now about his work and how it is recieved? So what does an author do today about the one-every-week, at-the-drop-of-a-hat paperbacks he wrote in his spare time forty-odd years ago? © 1995 R. Except where noted, this intro is © 1998-1999 Brian Hunt Lionel Fanthorpe's Resume.

Meet the Reclusive Woman Who Became a Pioneer of Science Fiction. I’m standing in front of a house outside Cleveland, half-waiting for a spaceship to arrive. 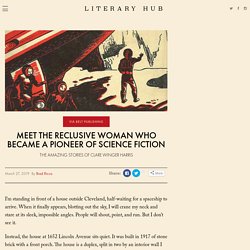 When it finally appears, blotting out the sky, I will crane my neck and stare at its sleek, impossible angles. People will shout, point, and run. But I don’t see it. Instead, the house at 1652 Lincoln Avenue sits quiet. It was built in 1917 of stone brick with a front porch. When I decided to organize a new edition of Clare Winger Harris’s stories, I knew I wanted to see the place she once lived in Lakewood, Ohio. What’s to push, anyway? Article continues after advertisement Who? It’s a fair response, especially for a woman author who wrote in a marginal genre in cheap magazines. Untitled. Index of /zines/Weird Tales/US. Bringing to life "Cosmos" – a serial science fiction novel from 1933.

Rough Edges. THE RIO KID WESTERN has long been one of my favorite Western pulps. 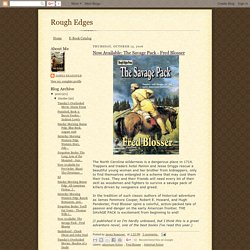 I discovered the Rio Kid character through paperback reprints published by Curtis Books during the Seventies, read many of those, and went on to collect and read quite a few of the original pulps. The Rio Kid is Captain Bob Pryor, former Union cavalry officer, who wanders through the West with his sidekick Celestino Mireles in the years following the Civil War, getting into all sorts of adventures. The “gimmick”, if you will, of this series is that the novels are placed in historical settings and always feature historical characters in supporting roles. THE COMSTOCK LODE is an early Rio Kid novel from the October 1940 issue of the magazine, although I read it in the Curtis Books paperback edition.

That's my copy in the scan. I think I read this one thirty-some-odd years ago, but I didn’t remember anything about the plot, which doesn’t really matter because it’s pretty predictable anyway. The Pulp Magazine Archive : Free Texts : Download & Streaming. Pulp International : vintage and modern pulp fiction; noir, schlock and exploitation films; scandals, swindles and news. Digital pulp sources. Pulp magazines and reprints aren’t the only way to enjoy the works of classic pulp — or New Pulp — fictioneers. 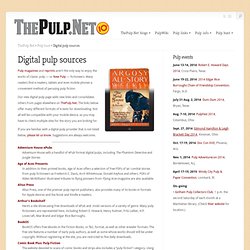 Many readers find e-readers, tablets and even mobile phones a convenient method of perusing pulp fiction. Our new digital pulp page adds new links and consolidates others from pages elsewhere on ThePulp.Net. The links below offer many different formats of e-texts for downloading. Not all will be compatible with your mobile device, so you may have to check multiple sites for the story you are looking for.

If you are familiar with a digital pulp provider that is not listed below, please let us know. Adventure House ePubs Adventure House sells a handful of ePub format digital pulps, including The Phantom Detective and Jungle Stories. Age of Aces Presents In addition to their printed books, Age of Aces offers a selection of free PDFs of air combat stories from pulp fictioneers as Frederick C. Altus Press Arthur’s Bookshelf BookOS Comic Book Plus: Pulp Fiction Dime Novel Castle iPulpFiction.