Safer Internet Day. Ore Oduba: First we're talking about online bullying and how to stop it. 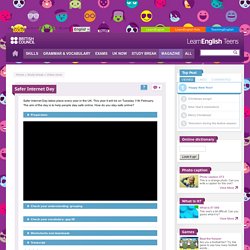 The children's charity the NSPCC is warning that smartphone apps make it easier than ever for people to be bullied online, particularly the apps that let you talk to people you don't know. Today is Safer Internet Day. All about helping us understand the risks out there, we asked one guy in the know his top tips for staying safe online. Jonathan Baggaley: I think our top three tips would be firstly, I think, be nice to people on the internet.

Sometimes people you know might use the internet to be mean to other people. I think the second tip is, if you see anything online that upsets you or worries you, make sure that you go and find, um, an adult that you trust, perhaps your mum or dad or a teacher at school, and tell them about it as soon as you can. The End of Forgetting. Four years ago, Stacy Snyder, then a 25-year-old teacher in training at Conestoga Valley High School in Lancaster, Pa., posted a photo on her MySpace page that showed her at a party wearing a pirate hat and drinking from a plastic cup, with the caption "Drunken Pirate. 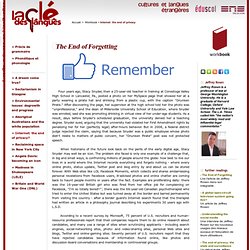 " After discovering the page, her supervisor at the high school told her the photo was "unprofessional," and the dean of Millersville University School of Education, where Snyder was enrolled, said she was promoting drinking in virtual view of her under-age students. As a result, days before Snyder's scheduled graduation, the university denied her a teaching degree.

Snyder sued, arguing that the university had violated her First Amendment rights by penalizing her for her (perfectly legal) after-hours behavior. But in 2008, a federal district judge rejected the claim, saying that because Snyder was a public employee whose photo didn't relate to matters of public concern, her "Drunken Pirate" post was not protected speech.

Net dangers. Internet Vs. Water. "Social" media. CARTOON. Social Media & Communication. Downsides of social media. Computer & Friends. Video games addiction. What's on your mind? Watch Facebook Take Over The World (Polish cartoonist) What if Facebook took over the world -- even more than it already has? 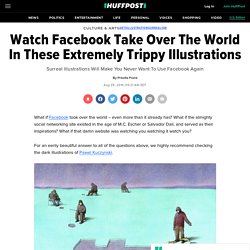 What if the almighty social networking site existed in the age of M.C. Escher or Salvador Dali, and served as their inspirations? What if that damn website was watching you watching it watch you? For an eerily beautiful answer to all of the questions above, we highly recommend checking the dark illustrations of Pawel Kuczynski. The artist, born in Szczecin, Poland, creates surreal satires that, gorgeous as they may be, strike a little too close to home for our liking. The depictions, of course, comment on our society's growing obsession with Mark Zuckerberg's brainchild, which has now become a crucial aspect of so many of our lives. "Some people say, that my works are surrealist drawings," Kuczynski explained in an email to The Huffington Post. 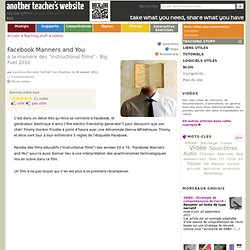 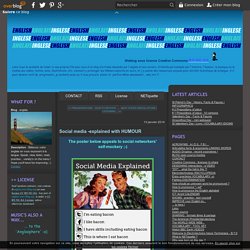 Twitter : "I'm eating bacon" How long are the messages displayed on Twitter ? So, why is the verb "eat" present continuous ? Fbook : "I like bacon" ... hmmm. LinkedIn : "I have skills including eating bacon" If you don't know this network, check what linkedin is... and you'll get the answer ! Foursquare : "This is where I eat bacon" Which is the key-word ? YouTube : "Watch me eat my bacon" ... you know the answer-key comes with the word "watch", don't you ? Facebook - The Musical.