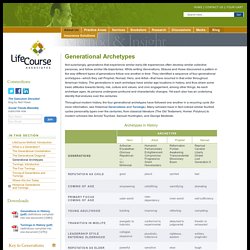 While writing Generations, Strauss and Howe discovered a pattern in the way different types of generations follow one another in time. They identified a sequence of four generational archetypes—which they call Prophet, Nomad, Hero, and Artist—that have recurred in that order throughout American history. We need to ditch generational labels – Rebecca Onion. Science fiction uses generations as guinea pigs in thought experiments: writers will change one important feature of human life, but leave the rest intact, in order to hypothesise how a single, world-rearranging shift might play out. 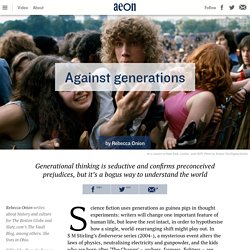 In S M Stirling’s Emberverse series (2004-), a mysterious event alters the laws of physics, neutralising electricity and gunpowder, and the kids who are born after ‘The Change’ – archers, farmers, fighters – are different from the ones who knew the powered world. In Robert Heinlein’s Orphans of the Sky (1963), people living in the closed environment of a multigenerational starship mutiny and kill many of their leaders; years later, their descendants have lost any true knowledge of their situation and believe that their ship is the whole world. These fictions work because they are controlled experiments. Please stop having dumb opinions about Millennials. Millennials! 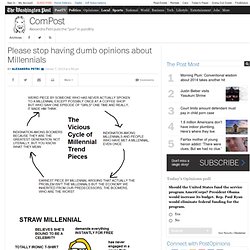 They are carbon-based lifeforms! Unlike you! You were a nitrogen-based lifeform! The sooner these millennials get over the carbon thing, the better! Gee, it’s hard to believe you share a planet with these crazy Instagrammers with their irony and their hipsters and their hookups and their Skrillexes! Deadly myth about millennials: The dark truth about a misunderstood generation. There is a demographic group in crisis today, though they’re rarely discussed. 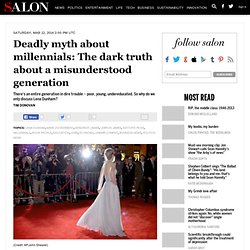 Occasionally, they’re used as a foil on conservative cable news shows, where overpaid hosts sneer derisively at their endemic “laziness.” Sometimes, members of Congress will trot them out as straw men to drum up support in rural districts. These are not your struggling baristas with their undergraduate degrees and mountains of debt, or your former-newsmen-turned-retail-drones. MARC MARON: The social media generation. Marc Maron is a comedian and the host of my favourite podcast, WTF with Marc Maron, which is a comedy podcast where Maron interviews not only comedians, but musicians, actors, chefs and artists. 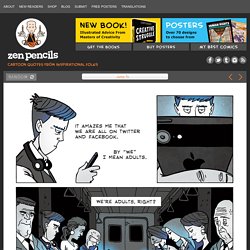 His conversations are always engaging, funny, raw and honest. I recommend it especially to those who are pursuing a creative field, as most of his interview subjects have insightful and unique stories about how they became successful. (As you can tell from its title, WTF contains explicit language and is for mature listeners … you’ve been warned!) Maron’s own success story is worth mentioning. Not the End of the World Show. The End of the World, by Reverend Billy Talen. 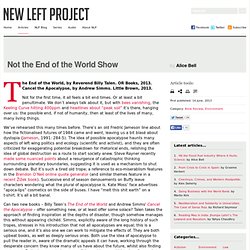 OR Books, 2013. Cancel the Apocalypse, by Andrew Simms. Little Brown, 2013. Not for the first time, it all feels a bit end times. Or at least a bit penultimate. We’ve rehearsed this many times before. Even artichokes have doubts. If this year is anything like the last 10, around 25 percent of employed Yale graduates will enter the consulting or finance industry*. 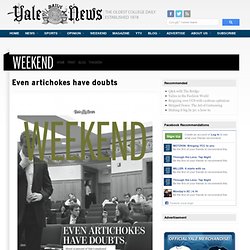 This is a big deal. This is a huge deal. What Can We Learn From Diagramming Sentences? Draft is a series about the art and craft of writing. 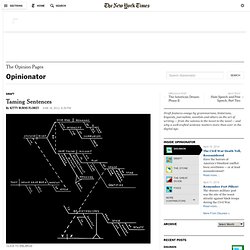 Diagramming sentences: what, after all, is it good for? Well, for one thing, it’s obvious that it’s good for stirring up controversy. The more than 300 comments (and close to 100 personal e-mails) in response to my last post, “A Picture of Language,” ran the glorious gamut from “love it/taught me to write/thank you, Mrs. Wengler!” To “ridiculous waste of time/confusing/who needs it?” But questions remain. Why Are American Kids So Spoiled? In 2004, Carolina Izquierdo, an anthropologist at the University of California, Los Angeles, spent several months with the Matsigenka, a tribe of about twelve thousand people who live in the Peruvian Amazon. 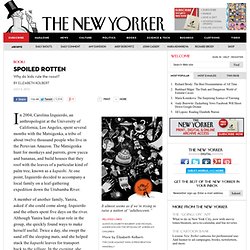 The Matsigenka hunt for monkeys and parrots, grow yucca and bananas, and build houses that they roof with the leaves of a particular kind of palm tree, known as a kapashi. At one point, Izquierdo decided to accompany a local family on a leaf-gathering expedition down the Urubamba River. A member of another family, Yanira, asked if she could come along. Izquierdo and the others spent five days on the river. Although Yanira had no clear role in the group, she quickly found ways to make herself useful. While Izquierdo was doing field work among the Matsigenka, she was also involved in an anthropological study closer to home. Young people are rubbish … Back in the day – a phrase never used back in the day by anyone I ever met – we were the knees of the bees. 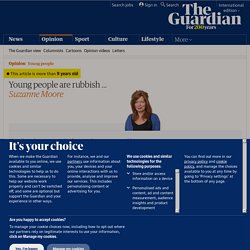 Being young was very heaven. Everything was better. Because we were just better. Open Letter from a Millennial: Quit Telling Us We’re Not Special « The Phoenix and Olive Branch. Why my child will be your child's boss. The Medication Generation: Teenagers and Antidepressants. Suzanne Collins’s “The Hunger Games,” review. Rebecca Stead chose to set her children’s novel “When You Reach Me”—winner of the 2010 Newbery Medal—in nineteen-seventies New York partly because that’s where she grew up, but also, as she told one interviewer, because she wanted “to show a world of kids with a great deal of autonomy.” Her characters, middle-class middle-school students, routinely walk around the Upper West Side by themselves, a rare freedom in today’s city, despite a significant drop in New York’s crime rate since Stead’s footloose youth.

The world of our hovered-over teens and preteens may be safer, but it’s also less conducive to adventure, and therefore to adventure stories. Perhaps that’s why so many of them are reading “The Hunger Games,” a trilogy of novels by Suzanne Collins, which take place at an unspecified time in North America’s future. The Meme Generation. This is the third biennial ROFL conference. And for those sad few of you remaining who still prefer standard English to the web jargon that is fast supplanting it, ROFL means “rolling on the floor laughing.” ROFL is not to be confused with the several hundred other permutations of online mirth such as lol, lulz, lulwut, ROFLcopter, and trollololol, the distinctions of which I’ll skip explaining to you in the interest of keeping us both awake. First held in 2008, ROFLcon is the brainchild of 25-year-old cofounder Tim Hwang, a Harvard grad who’s now a Berkeley law student, and who has to skip the first day of his own conference. “I have an exam on Monday,” he apologizes.

The Cheapest Generation - Derek Thompson and Jordan Weissmann. In 2009, Ford brought its new supermini, the Fiesta, over from Europe in a brave attempt to attract the attention of young Americans. It passed out 100 of the cars to influential bloggers for a free six-month test-drive, with just one condition: document your experience online, whether you love the Fiesta or hate it. Young bloggers loved the car. Young drivers? Not so much. Technology Is Changing How Students Learn, Teachers Say.

The researchers note that their findings represent the subjective views of teachers and should not be seen as definitive proof that widespread use of computers, phones and video games affects students’ capability to focus. Even so, the researchers who performed the studies, as well as scholars who study technology’s impact on behavior and the brain, say the studies are significant because of the vantage points of teachers, who spend hours a day observing students. The timing of the studies, from two well-regarded research organizations, appears to be coincidental.

One was conducted by the Pew Internet Project, a division of the that focuses on technology-related research. The other comes from Common Sense Media, a nonprofit organization in San Francisco that advises parents on media use by children. Teachers who were not involved in the surveys echoed their findings in interviews, saying they felt they had to work harder to capture and hold students’ attention.

“I’m an entertainer. Dr. The Go-Nowhere Generation. Are millennials delusional? Young people coming of age over the past decade or so have been referred to as Millennials, or, in a nod to their individualistic nature, Generation Me. Newly published research suggests they could also be called the generation with unrealistic expectations. Not Doing Better Than Our Parents and Loving It (Or, Why Keynes Was Right) Rob LaZebnik's Message for the Class of 2013.

The (Terribly) Lost Generation: One Millennial’s Critique And Defense Of Her Strange Bedfellows. Something funny happened after a screening of Frances Ha. My mother did not understand it. Her confusion is odd because she is a bright, open woman with whom I have seen many more disturbing and controversial movies. Closer comes to mind. Is This Both the Smartest and the Dumbest Generation? So I’m teaching a seminar this semester on Technology, Biotechnology, and Democracy. Its balanced effort, of course, will be show how technology makes our lives both better and worse, as well as how technology both enhances and threatens our democracy. The Hannah Montana Hypothesis - Issue 5: Fame. Hipsters and Low-Tech. Maria Popova: why we need an antidote to the culture of Google. You describe yourself as a "curator of interestingness" and run a website from New York called Brain Pickings, which covers all things curious and inspiring – books, art, science, photographs etc.

What's the common denominator for publishing something? How to Live Without Irony. “Hipster” is a Meaningless Slur. What medieval Europe did with its teenagers. Image copyright Getty Images Today, there's often a perception that Asian children are given a hard time by their parents. But a few hundred years ago northern Europe took a particularly harsh line, sending children away to live and work in someone else's home. JFK Still Dead, Baby Boomers Still Self-Absorbed. If you were Dante, who would you choose in place of Virgil as your guide through hell? : literature. Inequality and the Modern Culture of Celebrity. The Anarchy Project. Attune...ment (on generation) It’s the End of the World as We Know It . . . and He Feels Fine. Richard Florida Concedes the Limits of the Creative Class. Did I Abandon My Creative Class Theory? Not So Fast, Joel Kotkin.