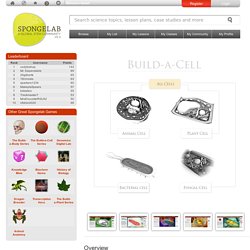 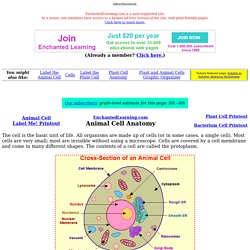 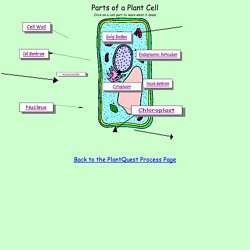 Back to the PlantQuest Process Page Cell Wall The cell wall is a rigid structure outside the cell membrane that supports and protects the cell (for plants, fungi, and some protists and bacteria). Plant Cell Anatomy. Advertisement. 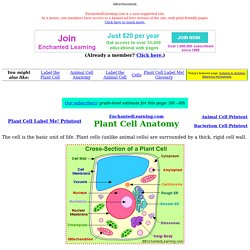 EnchantedLearning.com is a user-supported site. As a bonus, site members have access to a banner-ad-free version of the site, with print-friendly pages.Click here to learn more. (Already a member? Click here.) Cell Parts Definitions. The nucleus is where the DNA is kept and RNA is transcribed. 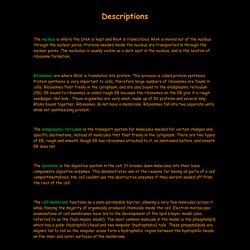 RNA is moved out of the nucleus through the nuclear pores. Proteins needed inside the nucleus are transported in through the nuclear pores. The nucleolus is usually visible as a dark spot in the nucleus, and is the location of ribosome formation. Ribosomes are where RNA is translated into protein. This process is called protein synthesis. The endoplasmic reticulum is the transport system for molecules needed for certain changes and specific destinations, instead of molecules that float freely in the cytoplasm. The lysosome is the digestive system in the cell. The cell membrane functions as a semi-permeable barrier, allowing a very few molecules across it while fencing the majority of organically produced chemicals inside the cell.

7: Cell Parts and their Functions flashcards. ASU - Ask A Biologist. Do All Cells Look the Same? 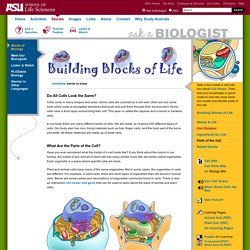 Cells come in many shapes and sizes. Some cells are covered by a cell wall, other are not, some have slimy coats or elongated structures that push and pull them through their environment. Some cells have a thick layer surrounding their cell. This layer is called the capsule and is found in bacteria cells. In our body there are many different kinds of cells. What Are the Parts of the Cell? What is a cell? Cells are the basic building blocks of all living things. 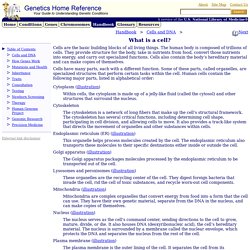 The human body is composed of trillions of cells. They provide structure for the body, take in nutrients from food, convert those nutrients into energy, and carry out specialized functions. Cells also contain the body’s hereditary material and can make copies of themselves. CELLS alive! Puzzles. Cell Biology Games, Virtual Labs, Activities. Cells All living things are made of cells! 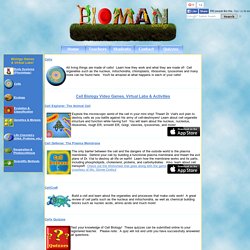 Learn how they work and what they are made of! Cell organelles such as the nucleus, mitochondria, chloroplasts, ribosomes, lysosomes and many more can be found here. You'll be amazed at what happens in each of your cells! Cell Biology Video Games, Virtual Labs & Activities. Cell menu. Cells. Seeing the word cell triggers so many memories. 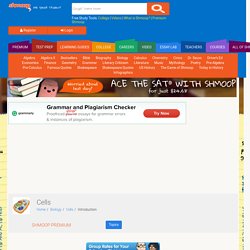 You may recall your last dropped call, solar panels, your current Fantasy Baseball spreadsheet, or your last school field trip to the local penitentiary. No? Anyway, onto real biology. All living things (we like to call them organisms because no one wants to be called a "thing") have five characteristics in common. Cells are the basic units of life because they are the smallest entities on Earth to have all five of the attributes of Life. The Five Basic Attributes of Life, Round Two Complexity and organization. (If you are totally confused right now, it probably means you need to go back to our handy dandy little intro unit. Cells. Early 12c., "small monastery, subordinate monastery" (from Medieval Latin in this sense), later "small room for a monk or a nun in a monastic establishment; a hermit's dwelling" (c.1300), from Latin cella "small room, store room, hut," related to Latin celare "to hide, conceal. 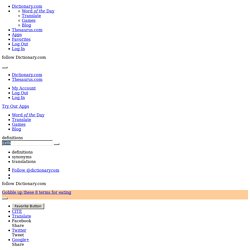 Sense of monastic rooms extended to prison rooms (1722). Electric battery sense is from 1828, based on original form. Cells - BrainPOP. Cell Structure. All living organisms on Earth are divided into cells. The main concept of cell theory is that cells are the basic structural unit for all organisms. Cells are small compartments that hold the biological equipment necessary to keep an organism alive and successful.

Living things may be single-celled or they may be very complex such as a human being. Home of CELLS alive!