Kidsnetsoft Film Unit. Boclips for teachers. Goodwinnovate - Tech tips, green screen, iPads and more. Come check out how I infuse technology into my classroom. Educational Clips from Popular Media. Class Tech Tips: 8 Tools to Create How-To Videos for Students. How to Make Book Trailer Videos. How One Teacher Champions Student Reflection with Technology and Public Speaking. Traditionally, students submit their work on an assignment, after which the teacher gives feedback on that work and assigns that student a grade. 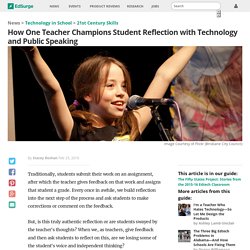 Every once in awhile, we build reflection into the next step of the process and ask students to make corrections or comment on the feedback. But, is this truly authentic reflection or are students swayed by the teacher's thoughts? When we, as teachers, give feedback and then ask students to reflect on this, are we losing some of the student's voice and independent thinking? Let’s take public speaking, for a moment. "Public speaking provides a wonderful opportunity for self-reflection," says English Teacher Kerry Hosmer. iPads and iPhones for filmmaking - Learn about film. Why use iPhones and iPads for filmmaking? 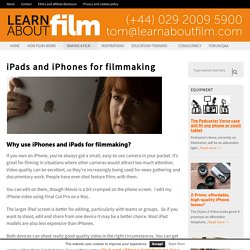 If you own an iPhone, you’ve always got a small, easy-to-use camera in your pocket. It’s great for filming in situations where other cameras would attract too much attention. Video quality can be excellent, so they’re increasingly being used for news gathering and documentary work. People have even shot feature films with them. You can edit on them, though iMovie is a bit cramped on the phone screen. The larger iPad screen is better for editing, particularly with teams or groups. Both devices can shoot really good quality video in the right circumstances. Movies in the Common Core State Standards for ELA and Literacy in Social Studies and other Disciplines. Background — a Crisis of Motivation in Education: One of the key problems in American education is that students have little motivation to learn. 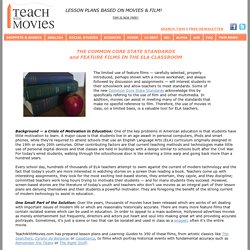 A major cause is that students live in an age awash in personal computers, iPods and smart phones, while they're required to attend schools that use an English Language Arts (ELA) curriculum originally designed in the 19th or early 20th centuries. Other contributing factors are that current teaching methods and technologies make little use of personal digital devices and that classes are held in buildings with a design similar to schools built after the Civil War.

For today's wired students, walking through the schoolhouse door is like entering a time warp and going back more than a hundred years. Every school day, hundreds of thousands of ELA teachers attempt to swim against the current of modern technology and the fact that today's youth are more interested in watching stories on a screen than reading a book. Reading: CCR 7. Reading: CCR 3. Teaching Film Literacy Without the Film. By Frank W. 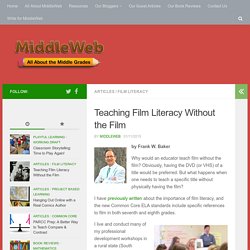 Baker Why would an educator teach film without the film? Obviously, having the DVD (or VHS) of a title would be preferred. But what happens when one needs to teach a specific title without physically having the film? I have previously written about the importance of film literacy, and the new Common Core ELA standards include specific references to film in both seventh and eighth grades. I live and conduct many of my professional development workshops in a rural state (South Carolina) where funding is an issue for lots of schools. Many educators don’t have access to the software (or hardware) they need to teach film. Film Stills & Close Readings The late film critic Roger Ebert, writing in his classic essay “How to Read a Movie,” noted that when he first began teaching film, he didn’t use the actual movie, but rather used film stills.

Ebert advocated then for what he called “frame analysis.” Here is an example: a film still from the classic 1942 movie “Casablanca.” Frank W. How to Use Green Screen Effects on iPads. Making Movies Magical These days, very little comes out of Hollywood without special effects added in post-production. 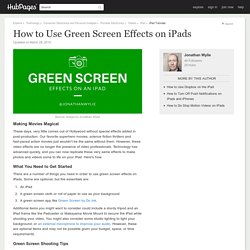 Our favorite superhero movies, science fiction thrillers and fast-paced action movies just wouldn't be the same without them. However, these video effects are no longer the preserve of video professionals. Technology has advanced quickly, and you can now replicate these very same effects to make photos and videos come to life on your iPad. Here's how. What You Need to Get Started There are a number of things you need in order to use green screen effects on iPads. The 100 Best Video Sites For Educators. Via Edudemic Bringing multimedia into the classroom is a great way to engage students in learning. 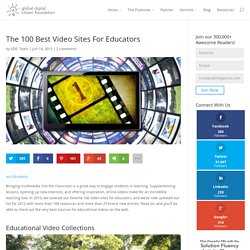 Supplementing lessons, opening up new interests, and offering inspiration, online videos make for an incredible teaching tool. In 2010, we covered our favorite 100 video sites for educators, and we’ve now updated our list for 2012 with more than 100 resources and more than 25 brand new entries. Read on, and you’ll be able to check out the very best sources for educational videos on the web. Educational Video Collections Specifically designed for education, these collections make it easy to find video learning resources.