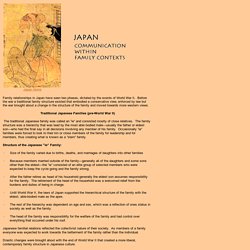 Before the war a traditional family structure existed that embodied a conservative view, enforced by law but the war brought about a change in the structure of the family and moved towards more western views. Traditional Japanese Families (pre-World War II) The traditional Japanese family was called an “ie” and consisted mostly of close relatives. The family structure was a hierarchy that was lead by the most able bodied male—usually the father or eldest son—who had the final say in all decisions involving any member of his family. Occasionally “ie” families were forced to look to their kin or close members of the family for leadership and for members, thus creating what is known as a “stem” family. 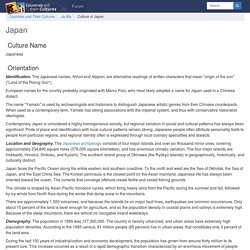 The Japanese names, Nihon and Nippon, are alternative readings of written characters that mean "origin of the sun" ("Land of the Rising Sun"). European names for the country probably originated with Marco Polo, who most likely adopted a name for Japan used in a Chinese dialect. The name "Yamato" is used by archaeologists and historians to distinguish Japanese artistic genres from their Chinese counterparts. Japanese Religion and Spirituality. Its towering majesty and near-perfect symmetry make Mt. 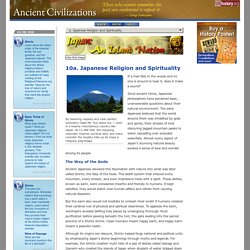 Fuji stand out — even in a heavily mountainous country like Japan. At 12,388 feet, the imposing mountain inspires spiritual awe, and many consider the lengthy hike up its slope a religious pilgrimage. If a tree falls in the woods and no one is around to hear it, does it make a sound? Since ancient times, Japanese philosophers have pondered basic, unanswerable questions about their natural environment. HISTORY OF JAPAN. EzineArticles Submission - Submit Your Best Quality Original Articles For Massive Exposure, Ezine Publishers Get 25 Free Article Reprints. Shinto: Japan’s Oldest Religion. Shinto is the indigenous faith of the Japanese people and it is as old as Japan itself. 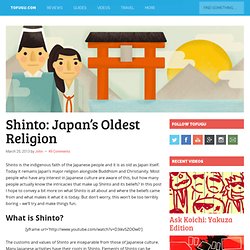 Today it remains Japan’s major religion alongside Buddhism and Christianity. Most people who have any interest in Japanese culture are aware of this, but how many people actually know the intricacies that make up Shinto and its beliefs? In this post I hope to convey a bit more on what Shinto is all about and where the beliefs came from and what makes it what it is today. But don’t worry, this won’t be too terribly boring – we’ll try and make things fun. Sacred Shinto music and dance (Kagura, Japanese traditional dance) Japanese History - Facts About Japan - Ancient Japan. Japan - Ancient Cultures. On the basis of archaeological finds, it has been postulated that hominid activity in Japan may date as early as 200,000 B.C., when the islands were connected to the Asian mainland. 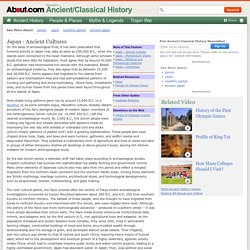 Although some scholars doubt this early date for habitation, most agree that by around 40,000 B.C. glaciation had reconnected the islands with the mainland. Based on archaeological evidence, they also agree that by between 35,000 and 30,000 B.C. Ancient Japan. By Tim Lambert The First Japanese Human beings have lived in Japan for at least 30,000 years. 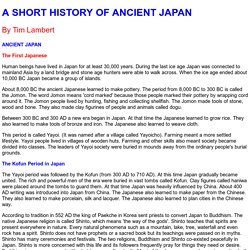 During the last ice age Japan was connected to mainland Asia by a land bridge and stone age hunters were able to walk across. When the ice age ended about 10,000 BC Japan became a group of islands. About 8,000 BC the ancient Japanese learned to make pottery. Between 300 BC and 300 AD a new era began in Japan. This period is called Yayoi. Timeline Of Ancient Japan. The Ancient Japanese. Jomon Period: 10,000 B.C. – 400 BC Stable living patterns began to appear in Japan with the arrival of the Jomon people around 10,000 B.C. 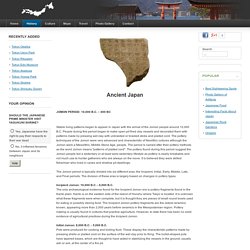 People during this period began to make open-pit fired clay vessels and decorated them with patterns made by pressing wet clay with unbraided or braided sticks and plaited cord. Japanese Feudalism and European Feudalism. Although Japan and Europe did not have any direct contact with one another during the medieval and early modern periods, they independently developed very similar socio-political systems. 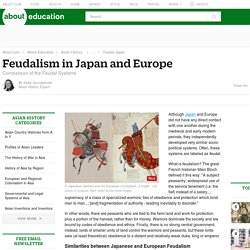 Often, these systems are labeled as feudal. What is feudalism? The great French historian Marc Bloch defined it this way: "A subject peasantry; widespread use of the service tenement (i.e. the fief) instead of a salary...; supremacy of a class of specialized warriors; ties of obedience and protection which bind man to man...; [and] fragmentation of authority - leading inevitably to disorder. " In other words, there are peasants who are tied to the farm land and work for protection plus a portion of the harvest, rather than for money. Geography of Japan. Japan's Mysterious Pyramids. Rare exhibition to show hidden treasures of Kyoto temples, shrines. KYOTO--An ancient statue of Buddha, a painting of a dragon and other sacred treasures usually hidden from the public will be shown at 18 temples and shrines in Kyoto Prefecture this spring. 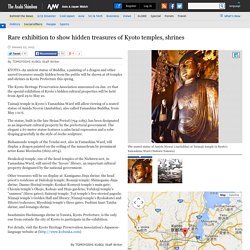 The Kyoto Heritage Preservation Association announced on Jan. 22 that the special exhibition of Kyoto’s hidden cultural properties will be held from April 29 to May 10. Taimaji temple in Kyoto’s Yamashina Ward will allow viewing of a seated statue of Amida Nyorai (Amitabha), also called Yamashina Buddha, from May 1 to 6. The statue, built in the late Heian Period (794-1185), has been designated as an important cultural property by the prefectural government.