Remembering the Past: A Window to the Future. Background The stained glass window in Centre Block of Parliament commemorates the legacy of former Indian Residential School students and their families, as well as the Prime Minister's historic Apology in 2008. 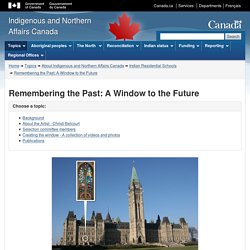 A five member selection committee comprised of leading Aboriginal art experts and former Indian Residential School students with First Nations, Métis and Inuit representation was established to oversee the artist selection process. The design of renowned Métis artist Christi Belcourt was unanimously selected by the committee. The window was installed directly above the west door of Centre Block in October 2012 and presented to the Speaker of the House on November 26, 2012 in a dedication ceremony on Parliament Hill. About the Artist - Christi Belcourt Christi Belcourt (b. 1966) is a Métis visual artist and author whose ancestry originates from the Métis historic community of Lac Ste.

Christi is a visual artist with a deep respect for the traditions and knowledge of her people. NunatsiaqOnline 2012-11-27: NEWS: Photo: Duncan unveils stained glass window. November 27, 2012 - 9:16 am Here's a detail from the stained glass window commemorating the legacy of Indian Residential Schools which John Duncan, minister of Aboriginal Affairs and Northern Development, presented to Andrew Scheer, Speaker of the House of Commons, on Nov. 26. 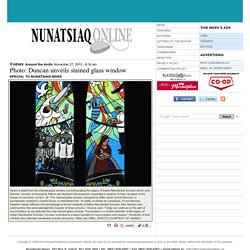 This stained glass window, designed by Métis artist Christi Belcourt, is permanently installed in Centre Block on Parliament Hill. “In 2008, on behalf all Canadians, Prime Minister Stephen Harper offered a formal Apology to former students of Indian Residential Schools, their families and communities that acknowledged the impacts of those schools,” Duncan said. “Today we continue on the path of reconciliation as we dedicate this new stained glass window. The window is a visible reminder of the legacy of Indian Residential Schools; it is also a window to a future founded on reconciliation and respect.” Violent victimization of Aboriginal women in the Canadian provinces, 2009. By Shannon Brennan In Canada, numerous programs and policies have been developed to address violence against women (Johnson and Dawson 2010; Status of Women Canada 2002). 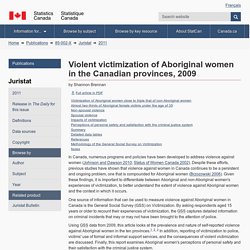 Despite these efforts, previous studies have shown that violence against women in Canada continues to be a persistent and ongoing problem, one that is compounded for Aboriginal women (Brzozowski 2006). Given these findings, it is important to differentiate between Aboriginal and non-Aboriginal women's experiences of victimization, to better understand the extent of violence against Aboriginal women and the context in which it occurs. One source of information that can be used to measure violence against Aboriginal women in Canada is the General Social Survey (GSS) on Victimization. By asking respondents aged 15 years or older to recount their experiences of victimization, the GSS captures detailed information on criminal incidents that may or may not have been brought to the attention of police. Data table for chart 1. Canadian Federal Government Apology to First Nations. Residential School Survior Stories. --- Transcriber’s Note: Speaker is not identified by the Interviewer on the recording. 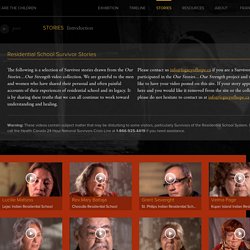 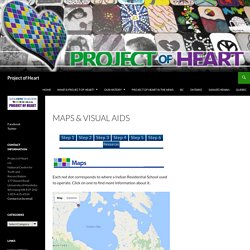 Click on one to find more information about it. Feel free to download this high resolution/printer ready map from the TRC. Click to go to a new website with the Residential Schools Interactive Map, which is the first example of a Lake Huron Treaty Atlas map being made remotely, in a separate location from the Geomatics and Cartographic Research Centre, the Atlas host. This map is an initiative of the Shingwauk Residential Schools Centre (SRSC or Centre) of Algoma University, located on the site of the former Shingwauk and Wawanosh Indian Residential Schools in Sault Ste. Marie, Ontario. “The School never closed. TRC Visual Aid Posters The Truth and Reconciliation Commission of Canada (TRC) has produced a large number of posters for the purpose of educating Canadians about the operations of Indian Residential Schools across Canada and to commemorate the former students who attended these schools.

Saskatchewan. Where Are The Children.