Earthquake. Race of the Waves. Organization: Alexa Crawls Starting in 1996, Alexa Internet has been donating their crawl data to the Internet Archive. 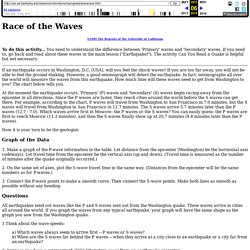 Flowing in every day, these data are added to the Wayback Machine after an embargo period. ©1995 The Regents of the University of California To do this activity... You need to understand the difference between 'Primary' waves and 'Secondary' waves. If an earthquake occurs in Washington, D.C. At the moment the earthquake occurs, 'Primary' (P) waves and 'Secondary' (S) waves begin racing away from the epicenter in all directions. Now it is your turn to be the geologist: Graph of the Data 1. 2. 3. Questions All earthquakes send out waves like the P and S waves sent out from the Washington quake. 1.Think about the wave speeds: a) Which waves always seem to arrive first -- P waves or S waves?

B) When are the S waves far behind the P waves -- when they arrive at a city close to an earthquake or a city far from an earthquake? 2. How many minutes earlier? Can You Read a Quake? Organization: Alexa Crawls Starting in 1996, Alexa Internet has been donating their crawl data to the Internet Archive. 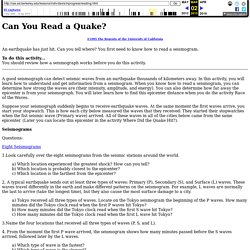 Flowing in every day, these data are added to the Wayback Machine after an embargo period. ©1995 The Regents of the University of California. Shadows from the Core. 6) studying meteorites, planets or other space objects All of the methods listed above may help us a little. 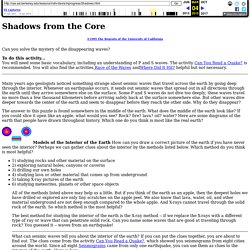 But if you think of the earth as an apple, then the deepest holes we have drilled or explored are only tiny scratches on the apple peel. We also know that lava, water, oil, and other material underground are not deep enough compared to the whole apple. And X-rays cannot travel through the solid rock of the earth.

So which method is the most helpful? The best method for studying the interior of the earth is the X-ray method -- if we replace the X-rays with a different type of ray or wave that can penetrate solid rock. Lesson Two: The Earth, Introductory Activities. Activities Activity 1: Word Banks Step 1: Use sheets of chart paper to create word banks to display in the classroom. 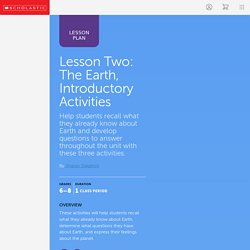 The banks will serve as a basis for language and word study throughout the unit. Optional: Make multiple word banks divided into categories. One word bank could list students' feelings or impressions about Earth, while another could be scientific terms used to describe Earth. Step 2: Encourage students to add words as the unit progresses. Activity 2: Knowledge Charts Step 1: Discuss with students the facts they already know about Earth. Step 2: Ask students what questions they have about Earth. Step 3: Hang the charts side-by-side on a classroom wall. Lesson One: The Earth, Background and Glossary. Background Information The Living Planet Earth is the only planet on which life is known to exist. 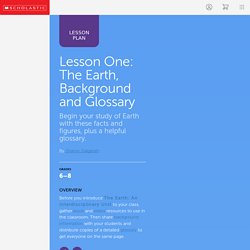 It is uniquely suited to life because it is warmed by the nearby sun, it is surrounded by a life-supporting atmosphere, it has a large supply of air and water, and there are plenty of minerals in its crust. Earth in Space. Earth Science for Kids: Topography. Science >> Earth Science for KidsWhat is topography? 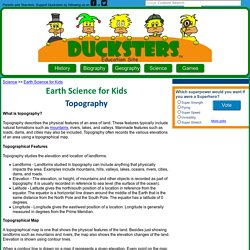 Topography describes the physical features of an area of land. These features typically include natural formations such as mountains, rivers, lakes, and valleys. Manmade features such as roads, dams, and cities may also be included. Topography often records the various elevations of an area using a topographical map. Topographical Features Topography studies the elevation and location of landforms. Landforms - Landforms studied in topography can include anything that physically impacts the area. 8th Grade Earth Science (NYS Regents) 2011-12.