24 words that mean totally different things now than they did pre-Internet. (Nathaniel Grann/The Washington Post) Technological change, as we know very well, tends to provoke linguistic and cultural change, too. 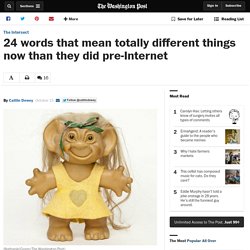 It’s the reason why, several times a year, dictionaries trumpet the addition of new and typically very trendy words. But more interesting than the new words, I think, are the old words that have gotten new meanings: words such as “cloud” and “tablet” and “catfish,” with very long pre-Internet histories. The reappropriation is rarely random; in most cases, the original meaning of the word is a metaphor for the new one. Our data is as remote as a cloud, for instance; catfish are just as tricky and unpredictable as an online love interest. [Is the Internet ruining proper English? Anyway, this is all a very long way of saying that Dictionary.com’s 20th birthday is more interesting than most: To mark the occasion, the online dictionary has compiled a list of words whose meanings have changed since it launched two decades ago. Bump Block Canoe Catfish Cloud. Sociology as Un-Learning - Feminist Reflections. 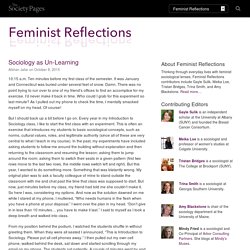 Ten minutes before my first class of the semester. It was January and Connecticut was buried under several feet of snow. Damn. There was no point trying to run over to one of my friend’s offices to find an accomplice for my exercise. I’d never make it back in time. But I should back up a bit before I go on. From my position behind the podium, I watched the students shuffle in without greeting them. Five minutes passed, although it seemed much longer. At 10:37 a.m., exactly 12 minutes since class was supposed to start, I put my phone away, picked up the syllabus and started class as if nothing unusual had just transpired. The students shook their heads. From here on, we had a lively discussion about the lessons learned and un-learned from this exercise. 1) The first lesson of this exercise is to understand that social norms – how we are expected to behave in a given situation—are always working on us whether we know it or not.

Works Cited: If I Can’t See It, How Can it Affect Me? In this post Nathan Palmer discusses how supra-individual factors can influence our thoughts, behaviors, and experiences even if we cannot see them. 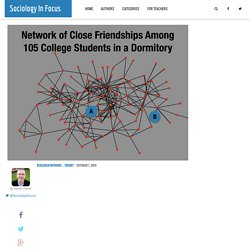 Sociology is the study of how society influences the individual. Some of these social influences are easy to see (e.g. social punishments for individuals who commit crimes that harm society). However, often the social factors that have the most profound impact on us are things that we cannot perceive with our own eyes. I know that makes sociology sound like the study of social magic, but nothing could be further from the truth. Every student of sociology at some point has asked themselves, “If I can’t see these social forces, how can they be having such a profound affect on me?” Social Forces are Bigger Than You. U.S. mass shootings, from Stanford University. American deaths in terrorism vs. gun violence. After a gunman opened fire at Oregon's Umpqua Community College, killing nine people and injuring seven, a visibly upset Obama said the shootings were becoming all too routine. 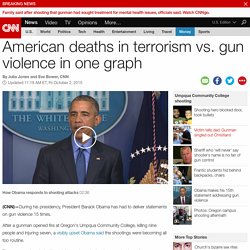 The gunman also died, although it's unclear whether he was shot by police or committed suicide. "The reporting is routine," he said. "My response here at this podium ends up being routine, the conversation in the aftermath of it. We've become numb to this. " He then asked news organizations to tally up the number of Americans killed through terrorist attacks in the last decade and compare it with the number of Americans who have died in gun violence.

Oregon governor: Now is not the time to talk about gun control Using numbers from the Centers for Disease Control and Prevention, we found that from 2004 to 2013, 316,545 people died by firearms on U.S. soil. (2013 is the most recent year CDC data for deaths by firearms is available.) So much for choosing different brands. Theyrule.