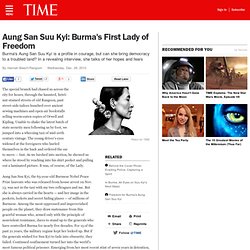 Unable to shake the latest batch of state security men following us by foot, we jumped into a wheezing taxi of mid-20th century vintage. The young driver's eyes widened at the foreigners who hurled themselves in the back and ordered the car to move — fast. As we lurched into motion, he showed us where he stood by reaching into his shirt pocket and pulling out a laminated picture. It was, of course, of the Lady. Aung San Suu Kyi, the 65-year-old Burmese Nobel Peace Prize laureate who was released from house arrest on Nov. 13, was not in the taxi with my two colleagues and me.

The extent to which the junta has gone to try to foil the Lady, as Suu Kyi is fondly and universally known in Burma, is remarkable. Dusk was falling. Suu Kyi calls for speedy change to Myanmar constitution. By Robert Muller PRAGUE (Reuters) - Myanmar needs to change its constitution as fast as possible to put the country firmly on the path to democracy, Nobel Peace Prize winner and leader of the country's democratic opposition Aung San Suu Kyi said on Tuesday. 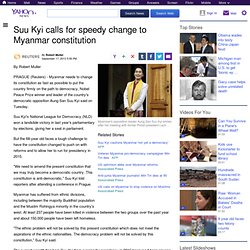 Suu Kyi's National League for Democracy (NLD) won a landslide victory in last year's parliamentary by-elections, giving her a seat in parliament. But the 68-year old faces a tough challenge to have the constitution changed to push on with reforms and to allow her to run for presidency in 2015. "We need to amend the present constitution that we may truly become a democratic country. This constitution is anti-democratic," Suu Kyi told reporters after attending a conference in Prague. Myanmar has suffered from ethnic divisions, including between the majority Buddhist population and the Muslim Rohingya minority in the country's west. 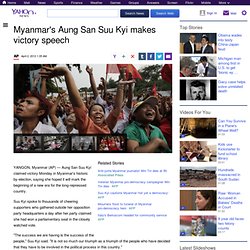 Suu Kyi spoke to thousands of cheering supporters who gathered outside her opposition party headquarters a day after her party claimed she had won a parliamentary seat in the closely watched vote. "The success we are having is the success of the people," Suu Kyi said. "It is not so much our triumph as a triumph of the people who have decided that they have to be involved in the political process in this country. " "We hope this will be the beginning of a new era," she said, as supporters chanted her name and thrust their hands into the air to flash "V'' for victory signs. A biography of Aung San Suu Kyi - About Burma - Burma Campaign UK. Aung San Suu Kyi surprise spectator at Burma Armed Forces Day parade. 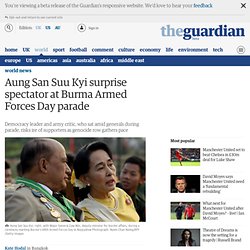 Once an ardent critic of Burma's military and its heavy-handed role in politics, Aung San Suu Kyi sat amid many of the generals who had kept her under house arrest for nearly 20 years, and watched with them as military vehicles rolled by. Her presence at the parade – while an obvious indication of the political reconciliation she is attempting to achieve – is sure to rile supporters and critics, many of whom question her political integrity and increasing closeness with a group that quashed dissent for nearly 50 years and has been accused of committing genocide against ethnic Rohingya Muslims. And so were, perhaps, the seating arrangements at the parade. Aung San Suu Kyi. Since no biography was printed in Les Prix Nobel 1991, this chronology has been assembled by the editor. 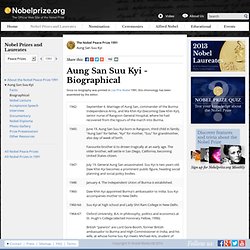 In the last four years her movements have still been restricted. While she has had some opportunities to telephone her family in England, she is regularly denounced in the government-controlled media, and there is concern for her personal safety. Efforts to revive any NLD party activities have been balked, and its members have been jailed and physically attacked. In the first months after detention was ended, she was able to speak to large gatherings of supporters outside her home, but this was stopped. Profile: Aung San Suu Kyi. 30 May 2012Last updated at 02:49 GMT Aung San Suu Kyi stood for election for the first time in 2012 Like the South African leader Nelson Mandela, Aung San Suu Kyi has become an international symbol of peaceful resistance in the face of oppression. 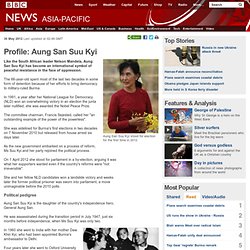 The 66-year-old spent most of the last two decades in some form of detention because of her efforts to bring democracy to military-ruled Burma. In 1991, a year after her National League for Democracy (NLD) won an overwhelming victory in an election the junta later nullified, she was awarded the Nobel Peace Prize. The committee chairman, Francis Sejested, called her "an outstanding example of the power of the powerless". She was sidelined for Burma's first elections in two decades on 7 November 2010 but released from house arrest six days later.