How To See Without Glasses, No Matter How Bad Your Vision Is. The first audio recordings from the bottom of the Mariana Trench are creepy as hell. Logical Fallacies. LóTì Hermīt — Your Dead Body. Our Physical World is Actually Created by Thought. In the spirit realm thought is action, thought creates, thought destroys, and thought is the reality. 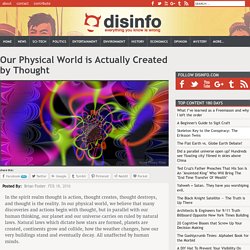 In our physical world, we believe that many discoveries and actions begin with thought, but in parallel with our human thinking, our planet and our universe carries on ruled by natural laws. Natural laws which dictate how stars are formed, planets are created, continents grow and collide, how the weather changes, how our very buildings stand and eventually decay. All unaffected by human minds. God thought and the universe was created. Creation by force of will didn’t end there. A five-dimensional black hole could 'break' general relativity, say physicists. If you thought regular black holes were about as weird and mysterious as space gets, think again, because for the first time, physicists have successfully simulated what would happen to black holes in a five-dimensional world, and the way they behave could threaten our fundamental understanding of how the Universe works. 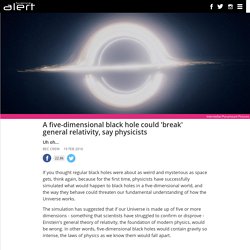 The simulation has suggested that if our Universe is made up of five or more dimensions - something that scientists have struggled to confirm or disprove - Einstein's general theory of relativity, the foundation of modern physics, would be wrong. In other words, five-dimensional black holes would contain gravity so intense, the laws of physics as we know them would fall apart. There's a lot to wrap your head around here, so let's start with the black holes themselves.

These ring-shaped black holes (or 'black rings') were first proposed in 2002, but until now, no one’s been able to successfully simulate their evolution. Does Language Influence How You See The World? Can learning a language rewire your brain? 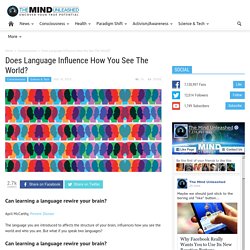 April McCarthy, Prevent Disease The language you are introduced to affects the structure of your brain, influences how you see the world and who you are. But what if you speak two languages? Can learning a language rewire your brain? As our species evolved parts of our brain expanded, resulting in more computing power for language. Most of the evidence for this comes from studies of people who are bilingual.

Brain scan studies show that switching between two languages triggers different patterns of brain activity compared with speaking in one language, particularly in the prefrontal cortex. Audio Recordings Document 'Weird Music' Heard By Apollo Astronauts On Far Side Of Moon. Sighing is actually a life-saving reflex, and scientists have found the switch that controls it. Remember all those times your parents told you it was rude to sigh? 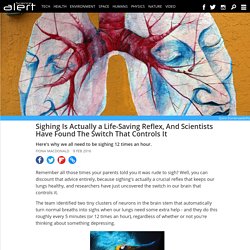 Well, you can discount that advice entirely, because sighing's actually a crucial reflex that keeps our lungs healthy, and researchers have just uncovered the switch in our brain that controls it. The team identified two tiny clusters of neurons in the brain stem that automatically turn normal breaths into sighs when our lungs need some extra help - and they do this roughly every 5 minutes (or 12 times an hour), regardless of whether or not you're thinking about something depressing. Behind the Top Secret Light-Based Communications of the Mantis Shrimp. In terms of communications privacy, mantis shrimp are way ahead of humans. 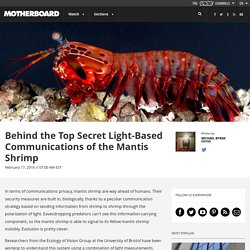 Their security measures are built in, biologically, thanks to a peculiar communication strategy based on sending information from shrimp to shrimp through the polarization of light. Eavesdropping predators can't see this information-carrying component, so the mantis shrimp is able to signal to its fellow mantis shrimp invisibly. Evolution is pretty clever. Researchers from the Ecology of Vision Group at the University of Bristol have been working to understand this system using a combination of light measurements, theoretical modeling, and anatomical observations. In a paper published in this week's Scientific Reports, the group describes a never-before-seen optical material employed by the mantis shrimp that allows it to reflect bright and colorful polarized light using microscopically thin features. First, let's pause a moment. Image: prilfish/Flickr OK, now back to physics. Rave on, mantis shrimp. Nasa to release recordings of unexplained 'music' from the far side of the moon.

The dark side of the moon has always held a mystical fascination for stargazers – so when the crew of one of the first missions to orbit it heard strange music in their headsets, they were so surprised they weren't sure whether or not to report it. 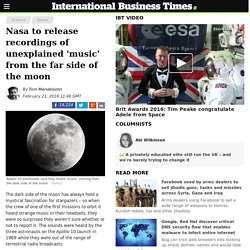 The sounds were heard by the three astronauts on the Apollo 10 launch in 1969 while they were out of the range of terrestrial radio broadcasts. Two months before Apollo 11 landed two men on the moon for the first time, the crew of Apollo 10 – Commander Thomas P. Stafford, Command Module Pilot John W. Young, Lunar Module Pilot Eugene A. Cernan – entered lunar orbit as part of a "dress rehearsal" for the Apollo 11 moon landings. While they were out of radio contact with Nasa's mission control, they heard sounds described as "whistling" in declassified mission transcripts. Long Before Trees Overtook the Land, Earth Was Covered by Giant Mushrooms. NASA releases strange 'music' heard by 1969 astronauts. 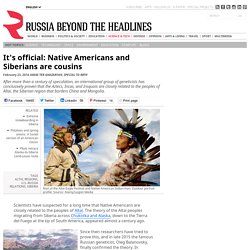 The theory of the Altai peoples migrating from Siberia across Chukotka and Alaska, down to the Tierra del Fuego at the tip of South America, appeared almost a century ago. Since then researchers have tried to prove this, and in late 2015 the famous Russian geneticist, Oleg Balanovsky, finally confirmed the theory. NASA Discovers Hidden Portals In Earth’s Magnetic Field. Source: www.collective-evolution.com | Original Post Date: March 8, 2013 – Our planet has come a long way in scientific breakthroughs and discoveries. 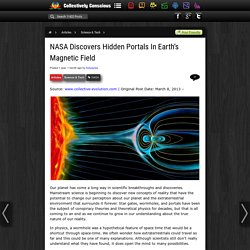 Mainstream science is beginning to discover new concepts of reality that have the potential to change our perception about our planet and the extraterrestrial environment that surrounds it forever. Star gates, wormholes, and portals have been the subject of conspiracy theories and theoretical physics for decades, but that is all coming to an end as we continue to grow in our understanding about the true nature of our reality. In physics, a wormhole was a hypothetical feature of space time that would be a shortcut through space-time.

We often wonder how extraterrestrials could travel so far and this could be one of many explanations. Turning science fiction into science fact seems to happen quite often these days and NASA did it by announcing the discovery of hidden portals in Earth’s magnetic field. Sources: Are you on Aweditoria? Amazon Indians Say There Is A Whole World Inside Our Planet. The Macuxi Indians knew of the existence of the Hollow Earth almost one hundred years ago. 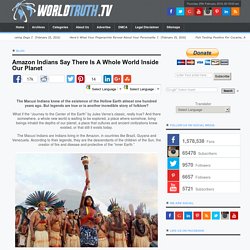 But legends are true or is another incredible story of folklore?