Characterisation of Caroline, Elizabeth and Justine in Frankenstein from Crossref. Women as victims It could be argued that the principal women characters in Frankenstein exist largely to be rescued, to suffer and then to die: Caroline, Victor's mother, is rescued as a child by his father Caroline in turn rescues Elizabeth, but dies after nursing her through scarlet fever and developing the disease herself Justine is rescued from a wretched childhood, only to be wrongly convicted and executed for the murder of Victor's brother William Elizabeth is murdered by the monster on the night of her marriage to Victor. 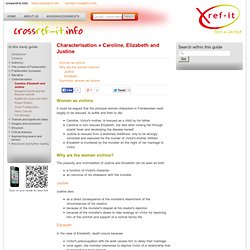 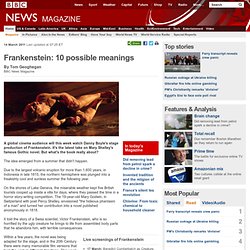 It's the latest take on Mary Shelley's famous Gothic novel. But what's the book really about? The idea emerged from a summer that didn't happen. Due to the largest volcanic eruption for more than 1,600 years, in Indonesia in late 1815, the northern hemisphere was plunged into a freakishly cool and sunless summer the following year. On the shores of Lake Geneva, the miserable weather kept five British tourists cooped up inside a villa for days, where they passed the time in a horror story-writing competition. It told the story of a Swiss scientist, Victor Frankenstein, who is so horrified by the ugly creature he brings to life from assembled body parts that he abandons him, with terrible consequences.

"There's evidence that she was very conversant with the scientists of her day. Continue reading the main story The rejected child. Frankenstein Commentary. Frankenstein: The Historical Context Greg Duncan What is unique about Frankenstein is that it represents and almost foreshadows the romantic disillusionment with the established order. 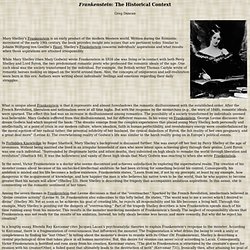 After the French Revolution, liberalism and nationalism were at all time highs. But with the response by the monarchies (e.g., the wars of 1848), romantic ideals were spurned. The effect this had was an increase in disillusionment among romantics. In Forbidden Knowledge by Roger Shattuck, Mary Shelley's background is discussed further. Jean-jacques rousseau on nature, wholeness and education. Contents: introduction · life · nature, wholeness and romanticism · social contract and the general will · on education · on the development of the person · conclusion · further reading and references · links · how to cite this article Why should those concerned with education study Rousseau? 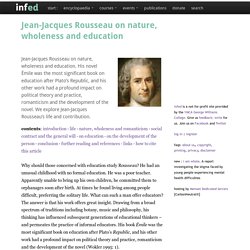 He had an unusual childhood with no formal education. He was a poor teacher. Apparently unable to bring up his own children, he committed them to orphanages soon after birth. At times he found living among people difficult, preferring the solitary life. Life Jean-Jacques Rousseau (1712 – 1778) was born in Geneva (June 28) but became famous as a ‘French’ political philosopher and educationalist. At the age of 13 he was apprenticed to an engraver. Jean-Jacques Rousseau returned to Paris in 1745 and earned a living as a music teacher and copyist. Rousseau’s mental health was a matter of some concern for the rest of his life. Frankenstein Paper. Frankenstein's monster: Why gothic is more popular than ever - Features - TV & Radio. But it also reflects deeper contemporary fears of the apocalyptic and the macabre: of bad science and corrupt power. 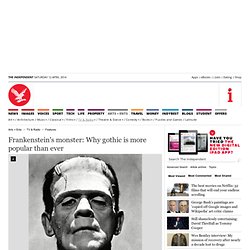 It reflects dark times, too, and offers escapism from austerity or insecurity – a safe, containable way to be scared. Most of all, perhaps, it addresses dark themes of psychosexuality. Frankenstein_Thesis. Romanticism-Gothic. Viewcontent.cgi?article=1057&context=english_fac&sei-redir=1&referer=http%3A%2F%2Fwww.google.co.uk%2Furl%3Fsa%3Dt%26rct%3Dj%26q%3Dgothic%2520victim%2520frankenstein%26source%3Dweb%26cd%3D22%26ved%3D0CDUQFjABOBQ%26url%3Dhttp%253A%252F%252Fepublications.mar. Heller. A Cultural Perspective on Frankenstein What is Cultural Criticism? 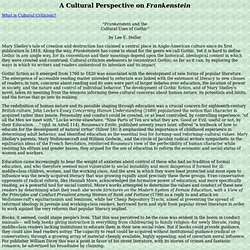 "Frankenstein and the Cultural Uses of Gothic" by Lee E. Heller Mary Shelley's tale of creation and destruction has claimed a central place in Anglo-American culture since its first publication in 1818. Gothic fiction as it emerged from 1760 to 1820 was associated with the development of new forms of popular literature. The redefinition of human nature and its possible shaping through education was a crucial concern for eighteenth-century British culture. Education came increasingly to bear the weight of anxieties about control of those who had no tradition of formal education, and who therefore seemed most vulnerable to social instability and most dangerous if formed for ill: middle-class children, women, and the working class. Books, it seemed, could shape people's lives. Frankenstein. Frankenstein: Birthing the New Female Gothic. 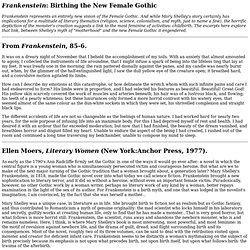 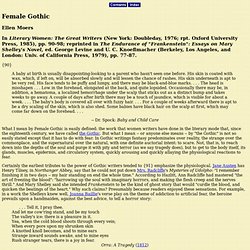 Oxford University Press, 1985), pp. 90-98; reprinted in The Endurance of "Frankenstein": Essays on Mary Shelley's Novel, ed. George Levine and U. C. A baby at birth is usually disappointing-looking to a parent who hasn't seen one before. What I mean by Female Gothic is easily defined: the work that women writers have done in the literary mode that, since the eighteenth century, we have called the Gothic. Certainly the earliest tributes to the power of Gothic writers tended to {91} emphasize the physiological. The Double Nature of Victor. Video SparkNotes: Mary Shelley's Frankenstein summary. LearnOutLoud.com Audio - Frankenstein, or Modern Prometheus. Frankenstein: A Modern Myth Channel 4 (Full) 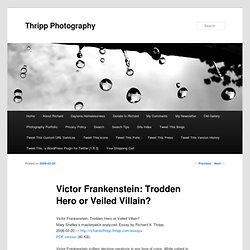 Mary Shelley’s masterpiece analyzed. Essay by Richard X. Thripp. 2008-02-20 — version (80 KB). Victor Frankenstein suffers decision paralysis in any time of crisis. While valiant in his struggles to create life, he immediately becomes the coward, assuming his creation to be a menace and running from it in terror: “one hand was stretched out, seemingly to detain me, but I escaped and rushed downstairs” (Shelley 51). This aversion to action is a persistent theme throughout the novel.

The Horror. HGS English Department 'Frankenstein' Pages. The term 'gothic' is used freely in our time, despite most people's having little comprehension of what it means with regard to literature. 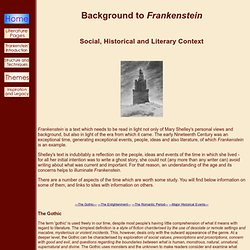 The simplest definition is a style of fiction charcterised by the use of desolate or remote settings and macabre, mysterious or violent incidents. This, however, deals only with the outward appearance of the genre. At a deeper level, the Gothic can be characterised by exploration of social values, prescriptions and proscriptions, concern with good and evil, and questions regarding the boundaries between what is human, monstrous, natural, unnatural, supernatural and divine.