Slideshow / The Epic of Gilgamesh / Invitation to World Literature. This image of Gilgamesh comes from Assyria. 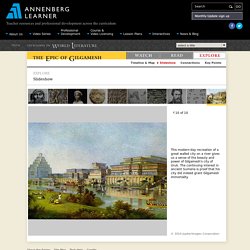 It shows Gilgamesh subduing a lion, a common pose for the great warrior-king. His long hair and beard also show his strength, as well as his physical perfection. David Damrosch talks about this image This image of Gilgamesh and Enkidu by modern-day artist Neil Dalrymple is inspired by ancient images of the two friends; notice Enkidu is part-animal, and smaller than the king whom he loves and serves.

The fall of Nineveh: introduction. Next year, we find the Babylonians in the Assyrian heartland, beginning a siege of Aššur. 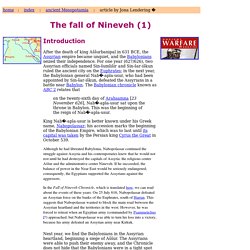 The Assyrians were able to push their enemy away, and the Chronicle does not hide that the Babylonians were in a tight spot for some time. At the end of 615, the Medes, a tribal federation living in modern Iran, intervened in the conflict. The temptation to fish in troubled waters must have been irresistible. The fall of Nineveh Chronicle (ABC 3) The fifteenth year [611-610]: In the month Du'zu the king of Akkad mustered his army and marched to Assyria victoriously. 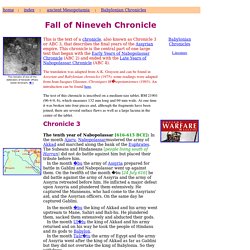 He marched about of [lacuna] and Šu[lacuna], plundered it and carried of its vast booty. In the month Arahsamna the king of Akkad took the lead of his army personally and marched against Ruggulitu. He did battle against the city and on the twenty-eighth day of the month Arahsamnu he captured it. IBSS - Biblical Archaeology - Cuneiform. Cuneiform means "wedged shaped" in Latin. 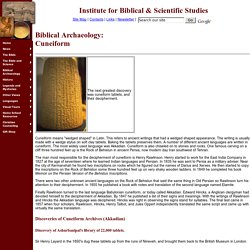 This refers to ancient writings that had a wedged shaped appearance. The writing is usually made with a wedge stylus on soft clay tablets. Baking the tablets preserves them. The Development of Agriculture. The Farming Revolution Taking root around 12,000 years ago, agriculture triggered such a change in society and the way in which people lived that its development has been dubbed the “Neolithic Revolution.” 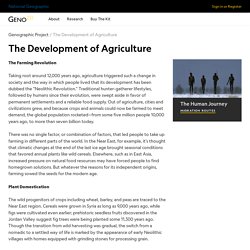 Traditional hunter-gatherer lifestyles, followed by humans since their evolution, were swept aside in favor of permanent settlements and a reliable food supply. Timeline of human prehistory - Wikipedia. This timeline of human prehistory comprises the time from the first appearance of Homo sapiens in Africa 200,000 years ago to the invention of writing and the beginning of history approximately 5,500 years ago. 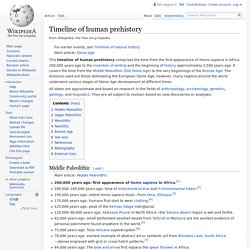 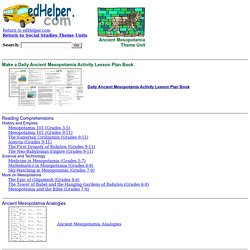 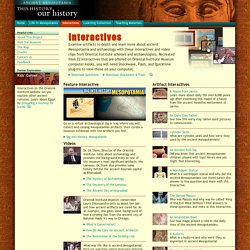 Recreated from 22 interactives that are offered on Oriental Institute Museum computer kiosks, you will need Shockwave, Flash, and Quicktime plug-ins to view these on your computer. Download Quicktime Download Shockwave & Flash Feature Interactive Go on a virtual archaeological dig in Iraq where you will collect and catalog Mesopotamian artifacts, then curate a museum exhibition with the artifacts you find. 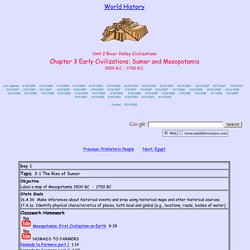 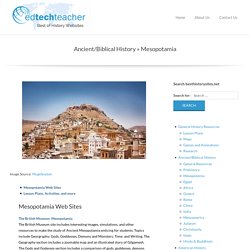 Mesoptamia Map. World History Timeline Ancient Mesopotamian civilization timeline and overview. United States History Early Years: Chapter Objectives. Describe the development of the first human civilizations and the factors that helped give rise to them. Lesson 1: Geography of Mesopotamia Describe the geographic features of Mesopotamia and the ways in which they contributed to the spread of agriculture.Explain how early farmers managed to control water supplies in the region.Summarize ways in which ancient people in Mesopotamia managed in a land with scarce resources.Language Objective: Examine how text organization makes new information easier to understand.