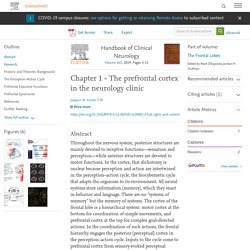 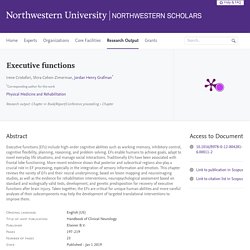 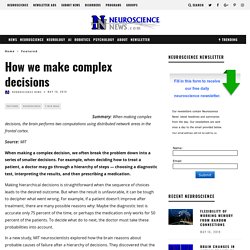 Source: MIT When making a complex decision, we often break the problem down into a series of smaller decisions. For example, when deciding how to treat a patient, a doctor may go through a hierarchy of steps — choosing a diagnostic test, interpreting the results, and then prescribing a medication. Making hierarchical decisions is straightforward when the sequence of choices leads to the desired outcome. But when the result is unfavorable, it can be tough to decipher what went wrong. In a new study, MIT neuroscientists explored how the brain reasons about probable causes of failure after a hierarchy of decisions. Decision-making behaviors: weighing ethology, complexity, and sensorimotor compatibility. Choice page. When Did Consciousness Begin? A provocative new book by Arthur Reber argues that bacteria are conscious and that the origins of mind are found in the simplest, single-celled organisms that arose billions of years ago. 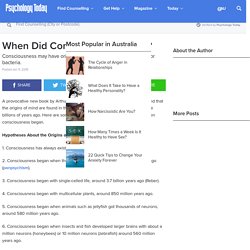 Here are some alternative answers to the question of when consciousness began. Hypotheses About the Origins of Consciousness 1. Consciousness has always existed, because God is conscious and eternal. Decision making and sequential sampling from memory. Ciência contribui para o sucesso do basquete feminino de Santo André - Esportes - Estadão. Como ajudar o cérebro a tomar melhores decisões. How the brain enables us to rapidly focus attention. University of Queensland researchers have discovered a key mechanism in the brain that may underlie our ability to rapidly focus attention. 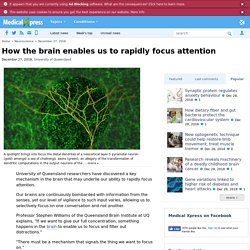 Our brains are continuously bombarded with information from the senses, yet our level of vigilance to such input varies, allowing us to selectively focus on one conversation and not another. Professor Stephen Williams of the Queensland Brain Institute at UQ explains, "If we want to give our full concentration, something happens in the brain to enable us to focus and filter out distractions. " "There must be a mechanism that signals the thing we want to focus on. " New Insight on How Memory Works. Summary: Study reports declarative memory depends upon conscious knowledge of what has been previously learned. 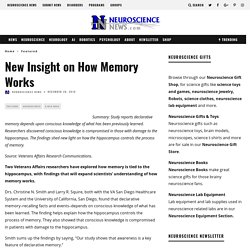 Researchers discovered conscious knowledge is compromised in those with damage to the hippocampus. The findings shed new light on how the hippocampus controls the process of memory. Source: Veterans Affairs Research Communications. Two Veterans Affairs researchers have explored how memory is tied to the hippocampus, with findings that will expand scientists’ understanding of how memory works. Endogenous attention modulates attentional and motor interference from distractors: evidence from behavioral and electrophysiological results. - PubMed - NCBI. Helping Students Develop Executive Function Skills. Executive function is an umbrella term in neuroscience to describe the neurological processes involving mental control and self-regulation. 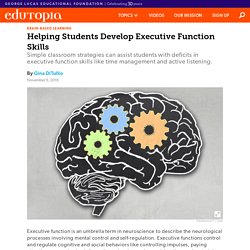 Executive functions control and regulate cognitive and social behaviors like controlling impulses, paying attention, remembering information, planning and organizing time and materials, and responding appropriately to social situations and stressful situations. Experts believe executive function is regulated by the frontal lobe of the brain—the prefrontal cortex. Because humans are born with brains that are not fully developed, children are not born with these skills, but they have the potential to develop them. Some students do not develop executive functions to the same degree as their peers. For these students with deficits, additional support in the classroom may improve their development of executive function.

Offering Teaching Support Addressing a deficit requires understanding the type of deficiency the student faces. Relato de sonhos pode ajudar a diagnosticar esquizofrenia. Maths shows how we lose interest. In his enthralling 2009 collection of parables, Sum: Forty Tales from the Afterlives, the neuroscientist David Eagleman describes a world in which a person only truly dies when they are forgotten. 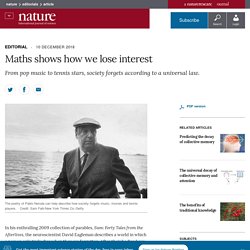 After their bodies have crumbled and they leave Earth, all deceased must wait in a lobby and are allowed to pass on only after someone says their name for the last time. “The whole place looks like an infinite airport waiting area,” Eagleman writes. “But the company is terrific.” Most people leave just as their loved ones arrive — for it was only the loved ones who were still remembering. But the truly famous have to hang around for centuries; some, keen to be off, are with an “aching heart waiting for statues to fall”. 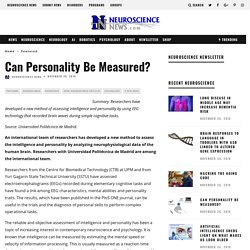 Source: Universidad Politécnica de Madrid. An international team of researchers has developed a new method to assess the intelligence and personality by analyzing neurophysiological data of the human brain. A neuroscientist reveals the crucial difference between feelings and emotions. To Understand Working Memory, Researchers Must Resolve This Debate. Summary: Researchers say, to better understand working memory, it is important to resolve the debate over how we hold and judge multiple pieces of information in mind. 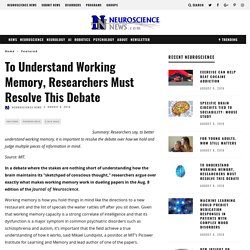 Source: MIT. In a debate where the stakes are nothing short of understanding how the brain maintains its “sketchpad of conscious thought,” researchers argue over exactly what makes working memory work in dueling papers in the Aug. 8 edition of the Journal of Neuroscience. Working memory is how you hold things in mind like the directions to a new restaurant and the list of specials the waiter rattles off after you sit down.

Edutopia. 5 ideias sobre como conversar com seu filho pequeno para 'construir' seu cérebro - BBC News Brasil. AI recreates activity patterns that brain cells use in navigation. Scientists have used artificial intelligence (AI) to recreate the complex neural codes that the brain uses to navigate through space. The feat demonstrates how powerful AI algorithms can assist conventional neuroscience research to test theories about the brain’s workings — but the approach is not going to put neuroscientists out of work just yet, say the researchers. “It really was a very striking and remarkable convergence of form and function.” Error loading player: No playable sources found The computer program, details of which were published in Nature on 9 May1, was developed by neuroscientists at University College London (UCL) and AI researchers at the London-based Google company DeepMind.

What Is Consciousness? Consciousness is everything you experience. It is the tune stuck in your head, the sweetness of chocolate mousse, the throbbing pain of a toothache, the fierce love for your child and the bitter knowledge that eventually all feelings will end. The origin and nature of these experiences, sometimes referred to as qualia, have been a mystery from the earliest days of antiquity right up to the present. Many modern analytic philosophers of mind, most prominently perhaps Daniel Dennett of Tufts University, find the existence of consciousness such an intolerable affront to what they believe should be a meaningless universe of matter and the void that they declare it to be an illusion.

That is, they either deny that qualia exist or argue that they can never be meaningfully studied by science. 'Estudar diversão é coisa séria', diz o neurocientista Michael Brecht. How To Improve Your Attention Span In 3 Easy Steps. Scientists Probe an Enduring Question: Can Language Shape Perception? Picture a sunlit Grecian sea or the deep hues of Santorini’s rooftops. They’re both called “blue” in English. But to Greek speakers, the lighter hue is “ghalazio” and the darker color “ble.” When researchers showed native speakers of both languages squares of light and dark blue, they found the Greek speakers viewed the two colors as more unlike each other. Did a different language influence how people viewed the two colors? Many researchers now believe that language does play a role in some aspects of cognitive activity, but the evidence remains murky.

The idea that language can shape perception and thought — a hypothesis formally known as “linguistic relativity” — harkens back to the 1930s. Still, the notion refuses to die. Now, cognitive scientists are applying new technologies to resolve the issue. In 2016, researchers in Japan investigated whether babies can categorize colors, by using a method that measured the babies’ neural responses to various colors and shades. O seu cérebro não é tão racional quanto parece: A influência dos vieses cognitivos. Como criamos significados? Facial Displays Are Tools for Social Influence: Trends in Cognitive Sciences.

Aspectos moleculares da organização comportamental no cérebro. Understand? Your Brain Signals Will Tell. Remember the voice of Charlie Brown's teacher: "Wha wha wha wha ... "? Sometimes we can hear someone speaking, but that doesn't always mean we're tuning in. Now neuroscientists have identified a way of detecting brain signals that indicate when a person is actually understanding speech. The technique, which applies machine learning, represents an advance in using relatively inexpensive EEG (electroencephalography) technology (think skullcap outfitted with wired electrodes) to monitor electrical brain activity and assess comprehension. The approach could offer a sensitive measure of language development in infants and comprehension among patients, including those in a reduced state of consciousness.

Neuroscientists at the Sainsbury Wellcome Centre have identified a circuit in the primary visual cortex (V1) of the brain that integrates head- and visual-motion signals. The study, published today in Neuron, elucidates the mechanisms by which visual and vestibular inputs to the brain sum together to enable appropriate behavioural responses.