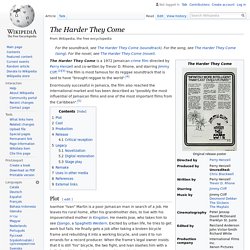 Rhone, and starring Jimmy Cliff.[2][3] The film is most famous for its reggae soundtrack that is said to have "brought reggae to the world".[4] Hester Street (film) - Wikipedia. Kane was nominated for the Academy Award for Best Actress. 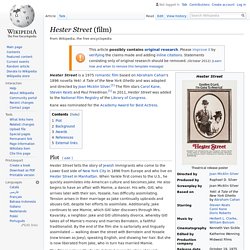 The film is noteworthy for its detailed reconstruction of Jewish immigrant life in New York at the turn of the century—much of the dialogue is delivered in Yiddish with English subtitles—and was part of the wave of films released in the late 1960s and through the 1970s which began explicitly to deal with the complexities of American Jewish identity. In addition, Carol Kane's lead character posed a still-provocative synthesis as she discovers her own self-assertion on behalf of her right to maintain a traditional identity in an aggressively modern setting. Hester Street is based upon a novella by Abraham Cahan, Yekl. Although it seemingly appears to be the struggle of all first generation immigrants, assimilation versus maintaining traditional ways, the story is much deeper.

It attempts to demonstrate that the freedom that America at the turn of the century offered was less than ideal. True Films: The Man Who Wanted to Classify the World. Love and Death - Wikipedia. Love and Death is a 1975 comedy film by Woody Allen. 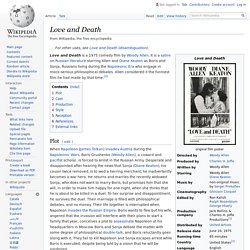 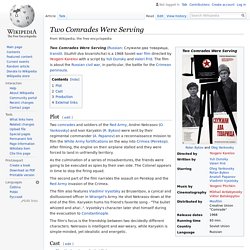 Sluzhili dva tovarishcha) is a 1968 Soviet war film directed by Yevgeni Karelov with a script by Yuli Dunsky and Valeri Frid. Lilian Harvey - Wikipedia. Lilian Harvey (19 January 1906[citation needed] – 27 July 1968[1]) was an Anglo-German actress and singer, long based in Germany, where she is best known for her role as Christel Weinzinger in Erik Charell's 1931 film Der Kongreß tanzt. 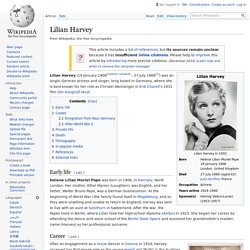 Early life[edit] Helene Lilian Muriel Pape was born in 1906, in Hornsey, North London. Her mother, Ethel Marion (Laughton), was English, and her father, Walter Bruno Pape, was a German businessman. At the beginning of World War I the family found itself in Magdeburg, and as they were unwilling and unable to return to England, Harvey was sent to live with an aunt at Solothurn in Switzerland. After the war, the Papes lived in Berlin, where Lilian took her high-school diploma (Abitur) in 1923. Career[edit] Emigration from Nazi Germany[edit] After World War II[edit] HyperNormalisation - Wikipedia. HyperNormalisation is a 2016 BBC documentary by British filmmaker Adam Curtis. 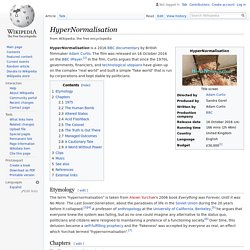 The film was released on 16 October 2016 on the BBC iPlayer.[2] In the film, Curtis argues that since the 1970s, governments, financiers, and technological utopians have given up on the complex "real world" and built a simple "fake world" that is run by corporations and kept stable by politicians. Etymology[edit] Chapters[edit] The film consists of nine chapters. Classic Polish Films on YouTube. Alena Aniskiewicz Two of Poland’s oldest film studios – TOR and KADR – have made 61 classic Polish films, all of which are classics and highly recommended, available on YouTube. 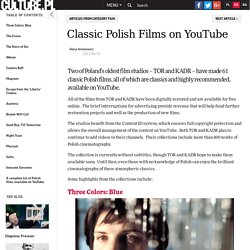 All of the films from TOR and KADR have been digitally restored and are available for free online. The brief interruptions for advertising provide revenue that will help fund further restoration projects and well as the production of new films. The studios benefit from the Content ID system, which ensures full copyright protection and allows the overall management of the content on YouTube. Both TOR and KADR plan to continue to add videos to their channels. The collection is currently without subtitles, though TOR and KADR hope to make them available soon. Some highlights from the collections include: Three Colors: Blue. True Romance - Wikipedia. True Romance is a 1993 American crime film with elements of black comedy and romance, directed by Tony Scott and written by Quentin Tarantino. 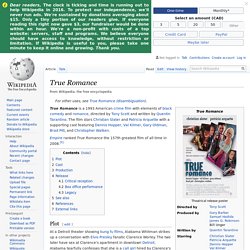 Alabama tearfully confesses that she is a call girl hired by Clarence's boss as a birthday present, but has fallen in love with Clarence. An apparition of Elvis appears to Clarence and convinces him to kill Alabama's pimp Drexl. Ace In The Hole Eviscerated Clickbait Journalism 60 Years Before It Existed : Trunkworthy. When it came out in 1951, Ace In The Hole was dismissed as “grotesque” and “absurd.” 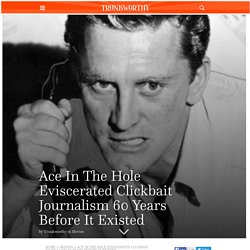 In 2015, it feels like an extended Daily Show take-down of what now passes for news. The simple fact is Ace in the Hole is an often hilarious, mean, nail-biting, soul-searching indictment of today’s click bait culture that plays like Funny or Die’s first foray into feature-length drama or an extended, especially vicious Daily Show segment. Just imagine the deliciously stark black-and-white cinematography as an Instagram filter; when the talk turns wires to front pages, hear it as retweets and Facebook shares. Sure, it’s cynical and biting view of media and the people who create could hardly be considered exclusive these days, but you’ll never see the dark truisms yanked straight from our daily feeds presented in a sharper, more thrillingly, or more entertaining manner than they are here. And what about that word: Exclusive. Ace in the Hole was an anomaly for Billy Wilder at the time: a big fat flop. A Face In The Crowd Is the Political Nightmare That Took 50 Years to Come True : Trunkworthy.

A Face in the Crowd shows the horror of a corrupt intertwining of mass media, celebrity, and politics that was incomprehensible in 1957 but terrifyingly commonplace today. 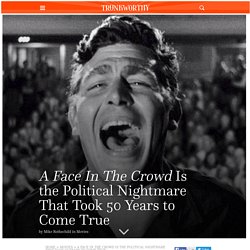 Part rags-to-riches cautionary tale, part political thriller, and part doomed romance, A Face in the Crowd—from director Elia Kazan and On the Waterfront writer Budd Schulberg—foretold how mass media, celebrity, commerce and politics would become forever intertwined, in a way that was almost incomprehensible upon its release in 1957 and is all too common now. Andy Griffith sneers, cackles, shouts, sweats and monologues as Larry “Lonesome” Rhodes, a booze-soaked drifter and singer doing a couple of days in jail for disorderly conduct. Lonesome is “discovered” by Marcia Jefferies (played by Patricia Neal), who produces a segment for a radio station in rural Arkansas. The Madness of King George - Wikipedia. The Madness of King George is a 1994 British biographical historical comedy-drama film directed by Nicholas Hytner and adapted by Alan Bennett from his own play, The Madness of George III.

It tells the true story of George III of Great Britain's deteriorating mental health, and his equally declining relationship with his eldest son, the Prince of Wales, particularly focusing on the period around the Regency Crisis of 1788–89. Modern medicine has suggested that the King's symptoms were the result of acute intermittent porphyria, although this theory has more recently been vigorously challenged, most notably by a research project based at St George's, University of London, which concluded that George III did actually suffer from mental illness after all.[3] Plot[edit] At first, the King's habits appear mildly eccentric, and are purposely ignored for reasons of state. Cast[edit] Oh, God! - Wikipedia. Oh, God! Is a 1977 comedy film starring George Burns and John Denver. Based on a novel of the same name by Avery Corman, the film was directed by Carl Reiner from a screenplay written by Larry Gelbart.

The story centres on unassuming supermarket manager Jerry Landers (Denver), chosen by God (Burns) to spread his message despite the skepticism of the media, religious authorities, and Landers' own wife (Teri Garr). The film inspired two sequels, Oh, God! Book II (1980) and Oh, God! Plot[edit] God appears as a kindly old man to Jerry Landers, an assistant supermarket manager. Jerry soon appears on television with Dinah Shore and describes the look God takes when he encounters him.

The Best Years of Our Lives - Wikipedia. Plot[edit] Before the war, Fred had been an unskilled drugstore soda jerk. He wants something better, but the tight postwar job market forces him to return to his old job. Fred had met Marie (Virginia Mayo) while in flight training and married her shortly afterward, before shipping out less than a month later. She became a nightclub waitress while Fred was overseas. Marie makes it clear she does not enjoy being married to a lowly soda jerk.

Homer was a football quarterback and became engaged to his next door neighbor, Wilma (Cathy O'Donnell), before joining the Navy. Peggy meets Fred while bringing her father home from a bar where the three men meet once again. Fahrenheit 9/11 - Wikipedia. Fahrenheit 9/11 is a 2004 documentary film by American filmmaker, director and political commentator Michael Moore. The film takes a critical look at the presidency of George W.

Bush, the War on Terror, and its coverage in the news media. The film is the highest grossing documentary of all time. Be Here to Love Me - Wikipedia. Be Here To Love Me: A Film About Townes Van Zandt is a 2004 documentary film directed by Margaret Brown which chronicles the often turbulent life of American singer-songwriter Townes Van Zandt. The film includes interviews of Van Zandt's immediate family and contemporaries such as Willie Nelson, Kris Kristofferson, Emmylou Harris, Lyle Lovett, Steve Earle and Guy Clark[1] along with "... home movies, old TV performances and, especially, early Seventies footage originally filmed by James Szalapski for his outlaw country documentary Heartworn Highways. "[2][3] Synopsis[edit]

The Barchester Chronicles. The Power of Nightmares. Diner (film) American Splendor (film) Longford (film) Longford is a 2006 television drama film directed by Tom Hooper and written by Peter Morgan. Best Of Enemies (2015) Boogie Man: The Lee Atwater Story. The Childhood of a Leader (film) Lost Highway (film) After the opening credits, which show a highway's dividing lines at night while blaring techno music plays in the background, Fred Madison (Bill Pullman), a Los Angeles saxophonist, receives a message from an unknown man on the intercom of his house.