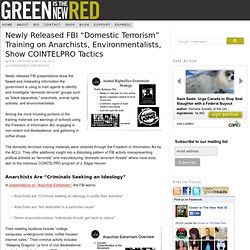 Among the more troubling portions of the training materials are warnings of activists using the Freedom of Information Act, engaging in non-violent civil disobedience, and gathering in coffee shops. The domestic terrorism training materials were obtained through the Freedom of Information Act by the ACLU. They offer additional insight into a disturbing pattern of FBI activity misrepresenting political activists as “terrorists” and manufacturing “domestic terrorism threats” where none exist, akin to the notorious COINTELPRO program of J. 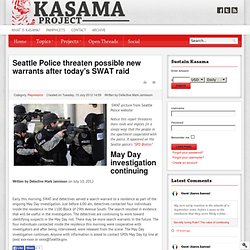 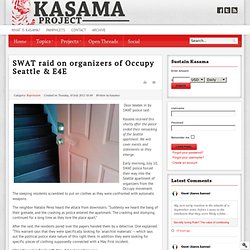 Kasama received this shortly after the police ended their ransacking of the Seattle apartment. Seattle May Day violence, May 1, 2012. #seamayday. Vandalism & pepper spray at Seattle protests. SEATTLE - A group of May Day protesters marched through Seattle's streets Tuesday, many dressed in black clothing and wearing masks and face makeup. 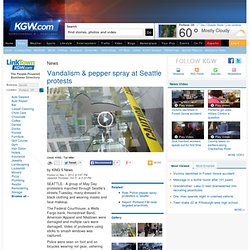 The Federal Courthouse, a Wells Fargo bank, Homestreet Band, American Apparel and Niketown were damaged and multiple cars were damaged. Video of protesters using sticks to smash windows was captured. Police were seen on foot and on bicycles wearing riot gear, ushering protesters away from businesses. Differing Accounts Emerge of This Morning's May Day-Related Raid by SPD. Not surprisingly, this morning's early-morning SWAT raid of a Seattle apartment as part of the Seattle Police Department's ongoing investigation into the violence on May Day is being cast in different lights by the different parties involved. 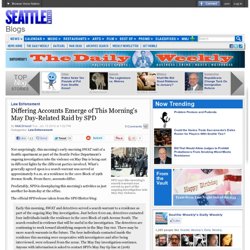 What's generally agreed upon is a search warrant was served at approximately 6 a.m. at a residence in the 1100 Block of 29th Avenue South. From there, accounts differ. Predictably, SPD is downplaying this morning's activities as just another ho-hum day at the office. The official SPD release taken from the SPD Blotter blog: Early this morning, SWAT and detectives served a search warrant to a residence as part of the ongoing May Day investigation. While the nuts and bolts are the same, that account varies from the more detailed version being offered by Occupy Seattle organizers, who say they were at the root of this morning's police activity. FBI raids three homes in Portland on Wednesday morning. Report: Portland FBI raids targeted anarchists. PORTLAND -- Search warrants targeting three Portland homes last week were part of a federal effort to learn more about the anarchist movement and vandalism in downtown Seattle during a May Day rally, according to a report by KGW news partner The Oregonian. 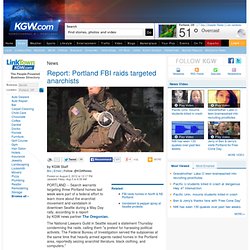 The National Lawyers Guild in Seattle issued a statement Thursday condemning the raids, calling them "a pretext for harassing political activists. The Federal Bureau of Investigation served the subpoenas at the same time that heavily armed agents raided homes in the Portland area, reportedly seizing anarchist literature, black clothing, and computers. " More: FBI raids homes in N, NE Portland The newspaper reported that Dennison Williams, 33, and Leah Plante, 24, who lived in two of the homes, had been called to testify Thursday before a federal grand jury. Both said they would recite only their names and shield themselves from further questioning by invoking their constitutional rights, The Oregonian reported. 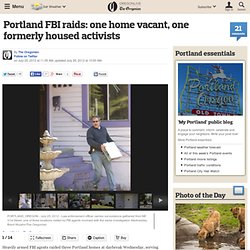 One home raided by FBI agents had been vacant for years but showed signs of recent activity, and one had once been occupied by young political activists whose lease was not renewed, neighbors said. Two Portland residents facing federal grand jury subpoena from Seattle vow they won't cooperate. View full sizeCourtesy of Committee Against Political RepressionLeah Plante, left, stands beside Dennison Williams, Wednesday morning at Peninsula Park to announce that they don't plan to answer questions before a federal grand jury in Seattle on Thursday. 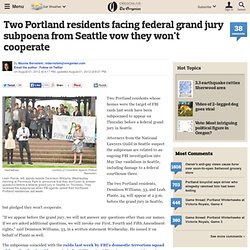 They received the subpoenas when FBI agents raided their Northeast Portland residences last week. Two Portland residents whose homes were the target of FBI raids last week have been subpoenaed to appear on Thursday before a federal grand jury in Seattle. Political Convictions? by Brendan Kiley - Seattle News. On Thursday, August 2, at roughly 12:45 p.m., a small woman with long black hair and a red cardigan sweater stood on the lawn of Seattle's federal courthouse, surrounded by a few friends and around 75 protesters. 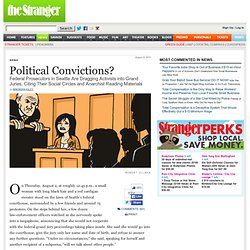 On the steps behind her, a few dozen law-enforcement officers watched as she nervously spoke into a megaphone, announcing that she would not cooperate with the federal grand jury proceedings taking place inside. She said she would go into the courthouse, give the jury only her name and date of birth, and refuse to answer any further questions. "Under no circumstances," she said, speaking for herself and another recipient of a subpoena, "will we talk about other people. " Subpoenaed Portland Activists Intend to Resist Grand Jury Investigating Anarchists. Leah-Lynn Plante refused to share any other information besides her name at a federal grand jury in Seattle on August 2. 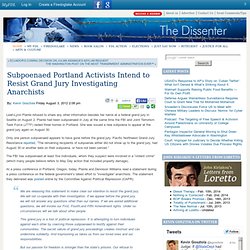 Plante had been subpoenaed in July at the same time the FBI and Joint Terrorism Task Force (JTTF) raided three homes in Portland. She was issued a new subpoena to appear at the grand jury again on August 30. Only one person subpoenaed appears to have gone before the grand jury. Pacific Northwest Grand Jury Resistance reported, “The remaining recipients of subpoenas either did not show up to the grand jury, had August 30 or another date on their subpoena, or have not been served.” 8.1.12 Grand Jury Resistors.

Statement by the subpoenaed from Portland. The two of us, Dennison Williams and Leah-Lynn Plante, were subpoenaed to the secret grand jury to begin meeting on Thursday investigating anarchists. Leah and Dennis We are releasing this statement to make clear our intention to resist the grand jury. We will not co-operate with their investigation. If we appear before the grand jury, we will not answer any questions other than our names. If we are asked additional questions, we will invoke our First, Fourth,and Fifth Amendment rights. This grand jury is a tool of political repression. But our passion for freedom is stronger then the state’s prisons. If you would like to join us, please visit: nopoliticalrepression.wordpress.com.

More importantly, though, you can show your solidarity by refusing to co-operate with any police force and encouraging your friends and families to do the same. Two clicks for more privacy: The Facebook Like button will be enabled once you click here. Seattle Chapter of the National Lawyers Guild Urges FBI and US Attorney to Drop Grand Jury Subpoenas. August 1, 2012For Immediate Release The Seattle Chapter of the National Lawyers Guild (NLG) calls on the FBI and the United States Attorney’s Office for the Western District of Washington to drop federal grand jury subpoenas recently served in Portland, Olympia and Seattle. It also calls for an end to raids on political activists. The NLG is concerned that raids and subpoenas are being used as a pretext for harassing political activists. FBI agents served these subpoenas at the same time that heavily armed FBI agents raided homes in the Portland area, reportedly seizing anarchist literature, black clothing, and computers.

Two Portlanders refuse to testify before grand jury after FBI raid. PORTLAND, Ore. – Two people from Portland say they're refusing to testify in front of a grand jury in connection with three Portland homes the FBI raided last week. One of the homes that were raided is off Northeast 8th Avenue. Neighbors said they believe at least one of them was squatting at the house. They say the home has been empty for years until some of them started seeing secret activity in the last month or two. And since the date of the FBI raid on July 25, a sign is now on the door of the house showing the house is owned by a bank. Alleged squatters leave home then bolt from questions. PORTLAND, Ore. - For the past nine months a group of people has taken over the home of a 66-year-old school teacher and Portland police say they're part of a radical arm of the Occupy Movement. The house is in the 6100 block of North Mississippi.

Last August the homeowner, Gloria Johnson, got a letter from her bank saying she had three months to get out, but that letter was bogus and she now wonders if the people living in her home were the ones who sent it. BREAKING: Interview and Documents from FBI Raid Show Feds are Targeting Anarchists. The first interview with any of the Portlanders who were served grand jury subpoenas as FBI agents searched their homes on Wednesday, July 25, shines some light on what authorities may be hoping to achieve with the raids.

Dennison Williams was in bed at his house on NE 8th Avenue on Wednesday morning when he heard a bang and someone shout, "FBI! " Then came a loud crash, which turned out to be agents breaking down his front door, and Williams heard a bang and a saw a flash of light—the agents throwing flash grenades. FBI Agents Raid Homes in Search of “Anarchist Literature” The raids were part of a multi-state operation that targeted activists in Portland, Olympia, and Seattle. Media.oregonlive.com/pacific-northwest-news/other/DWsearchwarrant.pdf. Northwest FBI Raids Target Occupy's 'Black Bloc' Occupy had big plans for the spring. Having mostly been rousted out of public parks by police last winter, the movement promised a big return on May 1st this year.

But that promise quickly fizzled, in part because marches in several cities turned violent and further turned off local residents. Committee Against Political Repression. Solidarity actions and statements to date. Many thanks and love to everyone striking and speaking against the grand jury. They are far from finished in their campaign of repression, but, given this flurry of activity, I have no doubt there are many who are not finished coming at them. NYC – a banner dropMinneapolis/St. Paul, MN – a solidarity demonstrationEast St.