Photoshop: White Teeth in Photoshop. Advanced Photoshop Brush Techniques Video Tutorial by Axeraider70. Xavier Durand-Hollis Jr. aka Axraider70 is one of the most popular members of the Brusheezy community. 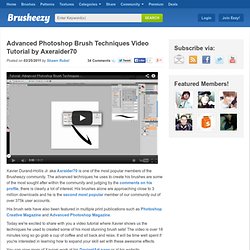 The advanced techniques he uses to create his brushes are some of the most sought after within the community and judging by the comments on his profile, there is clearly a lot of interest. His brushes alone are approaching close to 3 million downloads and he is the second most popular member of our community out of over 375k user accounts. His brush sets have also been featured in multiple print publications such as Photoshop Creative Magazine and Advanced Photoshop Magazine. Uma mentira perfeita em ™ Photoshop: Tutorial. How to Make Vibrant Cosmic Light Effects in Photoshop. This Photoshop tutorial features one of my favorite subjects: sneakers! 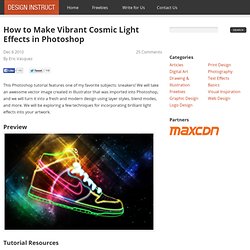 We will take an awesome vector image created in Illustrator that was imported into Photoshop, and we will turn it into a fresh and modern design using layer styles, blend modes, and more. We will be exploring a few techniques for incorporating brilliant light effects into your artwork. Preview Tutorial Resources Step 1: Obtaining the Vector Artwork For the purposes of this tutorial, I did not include the vector creation process because I want to focus on the Photoshop effects. If you choose to use the artwork I’ve prepared for you, download and open the following Photoshop PSD file. For the purposes of this tutorial, I’ll be referencing the PSD I’ve provided; and if some instructions don’t apply to you because you’re using your own artwork, just tweak the steps as necessary. 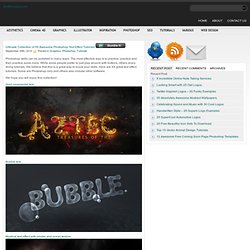 The most effective way is to practice, practice and then practice some more. We hope you will enjoy this collection! Gold ornamental text Bubble text Mystical text effect with smoke and ocean texture Abstract FX Extruded glossy 3D text Spray paint. Awesome digital bokeh effect in Photoshop. Our last Wallpaper of the Week was an image I had created using Pixelmator, and I really liked the outcome. 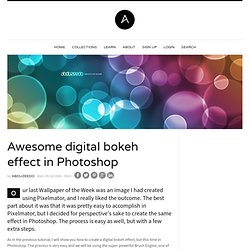 The best part about it was that it was pretty easy to accomplish in Pixelmator, but I decided for perspective's sake to create the same effect in Photoshop. The process is easy as well, but with a few extra steps. As in the previous tutorial, I will show you how to create a digital bokeh effect, but this time in Photoshop. The process is very easy and we will be using the super powerful Brush Engine, one of the coolest things in Photoshop. Easy iOS Style Wallpaper in Photoshop. I have received quite a few emails asking me how to create that sort of linen texture effect we see in the iOS on iPads and iPhones. 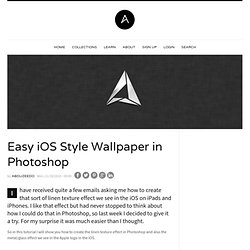 I like that effect but had never stopped to think about how I could do that in Photoshop, so last week I decided to give it a try. For my surprise it was much easier than I thought. So in this tutorial I will show you how to create the linen texture effect in Photoshop and also the metal/glass effect we see in the Apple logo in the iOS. Step 1 Open Photoshop and create a new document. Step 2 Add a new layer and go fill it with white using the Paint Bucket Tool (G). Step 3 Select one of the layers with the noise filter and then go to Filter>Blur>Motion Blur. Step 4 Select the other layer with noise and go again to Filter>Blur>Motion Blur.

Step 5 You will have to layers with the blurry effect, one will be with a vertical texture and another with horizontal. Adobe Illustrator Tutorials: 35 New Quality Tutorials 2010. Adobe Illustrator is a robust tool for creating vector elements for websites and print media designs. 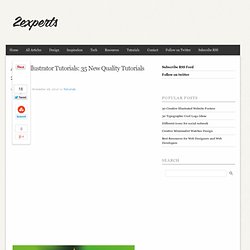 There are many Illustrator tutorials available on internet for new and intermediate users. In this post we’ve listing some of the best quality and step-by-step detailed Adobe Illustrator tutorials that will instruct a lot you want to learn. Create a Futuristic Portrait Poster in Photoshop. This is a detailed Photoshop Tutorial for the more advanced Photoshop user. You will learn how to combine a bunch of cool techniques to create a fantastic portrait poster with a touch of the future (aaah see what I did there?). Create Beautiful Mystery Grunge Effect in Photoshop. Published on Wed, Aug-25-2010 by Sergey In this Photoshop tutorial, I would like to tell how to make a beautiful mystery grunge artwork using some stock images and brushes.

It is not very hard work, but it requires some skill and your imagination. This work is very well suited for desktops and time for her creation will not take more than 2 hours. So let’s get started! You May Be Interested In The Following Posts. Create This Dazzling 3D Text Effect in Photoshop. Create colorful lighting burst text effects Photoshop tutorial.

Create a great light burst text effect with this Photoshop Tutorial In this Photoshop tutorial, we’re going to see how to create a light burst text effect with very simple techniques. We are going learn how to use the blend if section of the layer style options. Final Image Preview. Estilo Neon Super Fácil no Photoshop. Na última sexta fizemos um encontro do Abduzeedo na minha cidade, Porto Alegre. 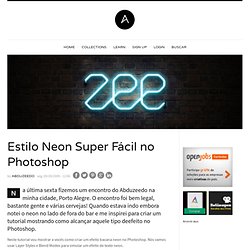 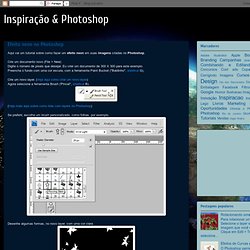 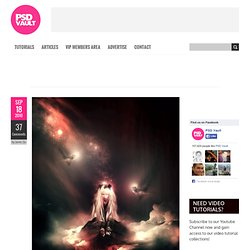 This is an intermediate level tutorial so some steps can be tricky, but why not have a try! The purpose of this tutorial is to revise several skills taught in previous tutorials, such as: Create an Awesome Number-Based Illustration. Combining the power of some of Photoshop’s most basic tools can yield awesome results. 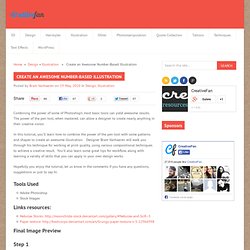 The power of the pen tool, when mastered, can allow a designer to create nearly anything in their creative vision. In this tutorial, you’ll learn how to combine the power of the pen tool with some patterns and shapes to create an awesome illustration. Designer Bram Vanhaeren will walk you through his technique for working at print quality, using various compositional techniques to achieve a creative result. 17 Best Photoshop CS5 Video tutorials. Home » Design » 17 Best Photoshop CS5 Video tutorials Adobe Creative Suit is one of the favorite software packages used by most of the designers. The latest suite called Adobe CS5 was released on 12th April, 2010. This suit contains bunch of applications for web, print and video design. Adobe CS5 applications had a great number of improved features and also every application had some brand new tools and features such as Content Aware Fill in Photoshop.

Here we collected 17 simple as well as advanced Photoshop CS5 video tutorials for our readers; take a time to watch each of them. You might also be interested in these following articles: Don’t Forget to Subscribe to Our RSS-feed and Follow Us on Twitter for more updates. 100 Best Photoshop Tutorials of All Time that Yield Professional Results. Photoshop tutorials are one of the most popular subjects on the web, as the digital art community continues to grow and new designers bring their unique skills. However, quality Photoshop tutorials that teach you a useful effect, have a quality finished result and are well explained are harder to find, and with the large number of tutorial sites available, it can be hard to sort the quality from the mundane. In this massive roundup, we’ve collected the top 100 best Photoshop tutorials that have ever been created, that yield professional results, teach you a useful effect, are well explained, and will have you designing like a pro in no time.

These tutorials are collected from niche tutorial sites around the web, and range in age from creation in 2008 to a few tutorials that were created just last week.