Who is Lucifer? EmailShare 657EmailShare When Carl Sagan had famously said that “we’re made of star stuff,” he wasn’t joking because the facts are that the cosmos are hidden within all of us humans. 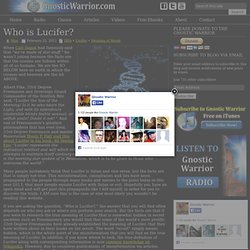 We are the SO BELOW here on earth in which the cosmos and heavens are the AS ABOVE. Albert Pike, 33rd Degree Freemason and Sovereign Grand Commander of the Scottish Rite said; “Lucifer the Son of the Morning! Is it he who bears the Light, and with its splendours intolerable blinds feeble sensual, or selfish souls? Doubt it not! Many people mistakenly think that Lucifer is Satan and vice versa, but the facts are that is simply not true. Therefor, for us smart researchers, we have come to understand this simple fact: That in order to find the light, we have to uncover the truth which is buried at the bottom of these lies and hundreds of years of church, government and ignorant human propaganda.

In the occult, Lucifer is often referred to as the ‘morning star.’ Manly P. Hence, KNOW THYSELF and KNOW GOD. A Steampunk Opera (The Dolls Of New Albion) “Jokerman dance to the nightingale tune Bird fly high by the light of the moon” -Bob Dylan The prehistoric archetytpe of the Wise Fool remains with us as strongly today as ever before. 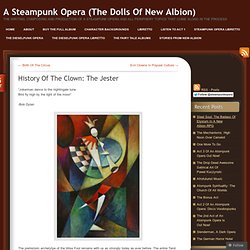 The entire Tarot centers around him. The great comedians of our age are great because they go far beyond jokes and point out profound observances in the center of your laughter. What Bill Hicks meant to me at a certain point in my life cannot be overstated. It is from this that both comedian and clown come. After the Roman theater closed down and with it the comedies and comic actors that had developed since Greek times, theater entered a dark age. Jesters were there to make people laugh.

The Natural Fool was… not clever. The Licensed Fool was someone who was witty, entertaining and adept at physical humor. A great jester might start out with a Baron, but some Duke would buy him from the Baron. They might get discovered by performing in town squares. Over time the jester’s place became more interesting. 8 Great Philosophical Questions That We'll Never Solve. Age of Enlightenment. The Age of Enlightenment (or simply the Enlightenment, or Age of Reason) is an era from the 1650s to the 1780s in which cultural and intellectual forces in Western Europe emphasized reason, analysis and individualism rather than traditional lines of authority. 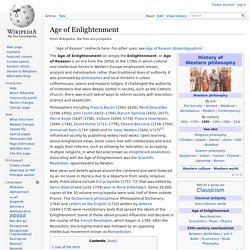 It was promoted by philosophes and local thinkers in urban coffeehouses, salons and masonic lodges. It challenged the authority of institutions that were deeply rooted in society, such as the Catholic Church; there was much talk of ways to reform society with toleration, science and skepticism. New ideas and beliefs spread around the continent and were fostered by an increase in literacy due to a departure from solely religious texts. Publications include Encyclopédie (1751–72) that was edited by Denis Diderot and (until 1759) Jean le Rond d'Alembert. Some 25,000 copies of the 35 volume encyclopedia were sold, half of them outside France. Use of the term[edit] If there is something you know, communicate it. Time span[edit] Individuation. The principle of individuation, or principium individuationis,[1] describes the manner in which a thing is identified as distinguished from other things.[2] The concept appears in numerous fields and is encountered in works of Carl Jung, Gilbert Simondon, Bernard Stiegler, Friedrich Nietzsche, Arthur Schopenhauer, David Bohm, Henri Bergson, Gilles Deleuze, and Manuel De Landa. 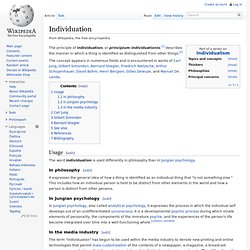 Usage[edit] The word individuation is used differently in philosophy than in Jungian psychology. In philosophy[edit] It expresses the general idea of how a thing is identified as an individual thing that "is not something else. " Logos. Logos (/ˈloʊɡɒs/, /ˈlɒɡɒs/, or /ˈloʊɡoʊs/; Greek: λόγος, from λέγω lego "I say") is an important term in philosophy, psychology, rhetoric, and religion. 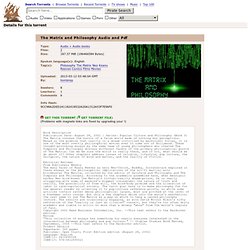