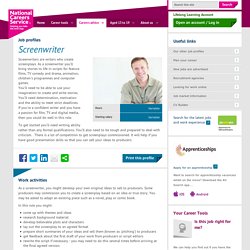 Writing Treatments That Sell. For someone that is new to the business of writing screenplays, the term "treatment" will most definitely be new to them as well. 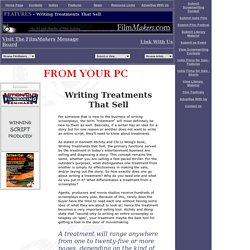 Basically, if a writer has an idea for a story but for one reason or another does not want to write an entire script, they'll need to know about treatments. As stated in Kenneth Atchity and Chi-Li Wong's book, Writing Treatments that Sell, the primary functions served by the treatment in today's entertainment business are selling and diagnosing a story. This concept remains the same, whether you are selling a fast-paced thriller. For the outsider's purposes, what distinguishes one treatment from another is simply its effectiveness in making the sale, and/or laying out the story. Sample Chapter of Writing Treatments That Sell by Kenneth Atchity - The Story Merchant. It's a fifty-fifty deal. 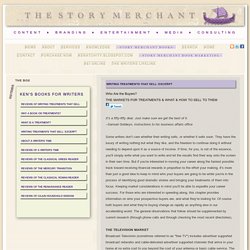 Just make sure we get the best of it. --Samuel Goldwyn, instructions to his business affairs office Some writers don't care whether their writing sells, or whether it sells soon. They have the luxury of writing nothing but what they like, and the freedom to continue doing it without needing to depend upon it as a source of income. How to write comedy: Writing sketches. You may be tempted to crack straight on with a sitcom, but start small. 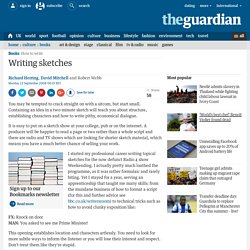 Containing an idea in a two-minute sketch will teach you about structure, establishing characters and how to write pithy, economical dialogue. It is easy to put on a sketch show at your college, pub or on the internet. A producer will be happier to read a page or two rather than a whole script and there are radio and TV shows which are looking for shorter sketch material, which means you have a much better chance of selling your work. I started my professional career writing topical sketches for the now defunct Radio 4 show Weekending. How to write comedy: Honing a joke. There is more to this than simply having a "crazy idea". 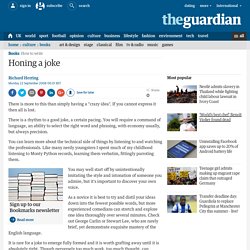 If you cannot express it then all is lost. How to write comedy: Writing sitcom. Creating a successful sitcom is almost impossibly difficult. 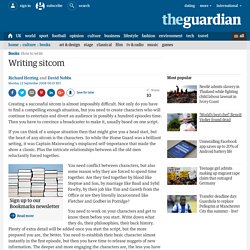 Not only do you have to find a compelling enough situation, but you need to create characters who will continue to entertain and divert an audience in possibly a hundred episodes time. How to write comedy: Writing for stand-up. In the early 90s I met Jimmy Tarbuck backstage at a show. 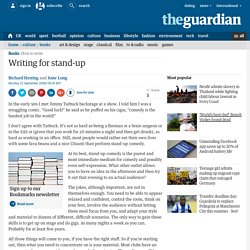 I told him I was a struggling comic. "Good luck! " How to write comedy: The toolbox. Comedic formulae must be used carefully and subtly, because the more they are used the more familiar and predictable they become and thus the less effective. 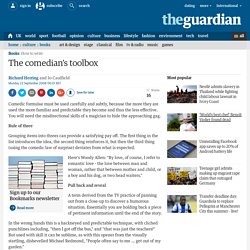 You will need the misdirectional skills of a magician to hide the approaching gag. Rule of three Grouping items into threes can provide a satisfying pay off. The first thing in the list introduces the idea, the second thing reinforces it, but then the third thing (using the comedic law of surprise) deviates from what is expected. Writersroom - Send a Script. Send a Script FAQs - Writers Room. Fact Sheet How to Write and Present your Script. Filmmaking Techniques, Tips, Courses, Forum.

Y3Resources for Script Writing. Film, Television and Commercial Production directory. BBC Academy - Production. Your first stop for movie reviews, news, and opinion. About the BSCW. What is the BSCW? 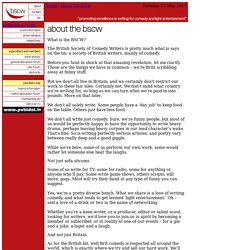 The British Society of Comedy Writers is pretty much what is says on the tin: a society of British writers, mainly of comedy. Before you faint in shock at that amazing revelation, let me clarify. Those are the things we have in common – we’re Brits scribbling away at funny stuff. But we don’t all live in Britain, and we certainly don’t restrict our work to these fair isles. Certainly not. We don’t all solely write. We don’t all write just comedy. While we’re here, some of us perform our own work, some would rather let someone else hear the laughs. Not just sofa sitcoms. Lsw.org. Home- Industrial Scripts®, Screenplay & Screenwriting Experts. Meet pro screenwriters, producers, agents. London Film School. Film & Acting School: Learn Film and Acting.

National Film and Television School. Raindance Film Festival. Advice for screenwriting film screenplays. What seems to be a long time ago, in 1997, I started working as an assistant for a director and producer based at Pinewood film studios. 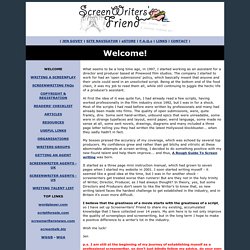 The company I started to work for had an 'open submissions' policy, which basically meant that anyone and their uncle could send in an unsolicited script. Being at the bottom end of the food chain, it was my job to read them all, while still continuing to juggle the hectic life of a producer's assistant. At first the idea of it was quite fun, I had already read a few scripts, having worked professionally in the film industry since 1992, but I was in for a shock. Most of the scripts I had read before were written by professionals and many had already been made into films. Screen Yorkshire. The Script Factory - Home. The Scriptwriter's Life. Scriptwriting in the UK. Writers.