The rise and rise of Calvin Klein underwear. Stealth wealth is a noble idea, but as Calvin Klein – the American designer who turned underwear into a status symbol, and by proxy, its wearers into sex symbols – once said: “The only way to advertise is by not focusing on the product.” 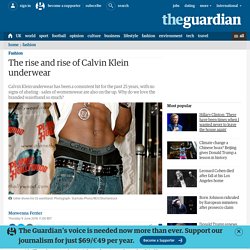 And lo, the logoed underwear was born. Klein didn’t invent it it, but he certainly owned it, and never has the season-by-season rhythm of fashion been so tested than it has been by Calvin Klein’s perennially popular underwear which, according to Selfridges, has been a consistent bestseller for the last 25 years that shows no signs of abating. Jo Hunt, head of buying for womenswear at Asos, says it has seen “a rise in the branded slogan or logo, or ‘slogo’” over the past 18 months, and cites Calvin Klein (among other “authentic American brands”) as key to this shift.

And in high fashion, an entire photoshoot in the current issue of Vogue stars Mica Arganaraz in a pair of Calvin Klein pants. Strategic Marketing Agency. Feather wings, crystals, corsets, lace and a lot of skin... 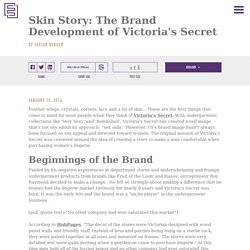 These are the first things that come to mind for most people when they think of Victoria’s Secret. With undergarment collections like 'Very Sexy' and 'Bombshell', Victoria's Secret has created a self-image that's not shy about its approach: “sex sells. " However, VS's brand image hasn't always been focused on sex appeal and directed toward women. Birmingham City University - Sign In. & Other Stories - Online Store. Negative in the News – Negative Underwear. Best Comfortable Lingerie BEST OF NEW YORK - NYMAG 2015 When downtown gals Lauren Schwab and Marissa Vosper realized there weren't great options for everyday lingerie - as comfortable and cool-looking as their Alexander Wang tees - they spent a year trying on undergarments in fitting rooms across the city and surveying thousands of women. 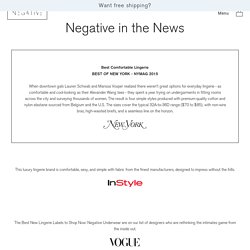 The result is four simple styles produced with premium-quality cotton and nylon elastane sourced from Belgium and the U.S. The sizes cover the typical 32A-to-36D range ($70 to $85), with non-wire bras, high-waisted briefs, and a seamless line on the horizon. This luxury lingerie brand is comfortable, sexy, and simple with fabric from the finest manufacturers, designed to impress without the frills. The Best New Lingerie Labels to Shop Now: Negative Underwear are on our list of designers who are rethinking the intimates game from the inside out.

Negative focuses on comfortable, uncomplicated lingerie. Eva Chen named them one of her favorite brands. #MyFirstBra – Yellowberry. Herself. The 35-Year Evolution Of Victoria's Secret. Underwear as Outerwear: Has Victoria’s Secret Gone too Far? Victoria’s Secret is drawing the ire of some as its new ad campaign shows women wearing its lingerie out on the streets as clothing. 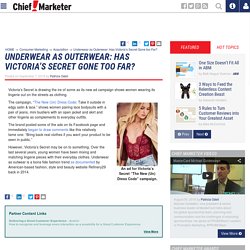 The campaign, “The New (Un) Dress Code: Take it outside in edgy satin & lace.” shows women pairing lace bodysuits with a pair of jeans, mini bustiers with an open jacket and skirt and other lingerie as complements to everyday outfits. Victoria's Secret Angel Constance Jablonski strips off for Etam's Paris Fashion Week show. As a Victoria's Secret Angel she's no stranger to flashing the flesh. 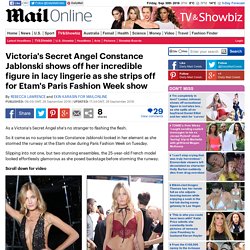 Ruffling a few feathers? Products Archive - Marie Yat. This woman is designing lingerie that resists the male gaze. This article is part of a series of collaborative content brought to you by 1 Granary magazine. 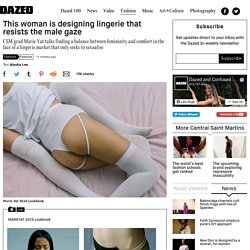 The concept of gender-neutrality isn’t unfamiliar in fashion industry. Look at London department store Selfridges’ retail space Agender, which aimed to provide its customers with the opportunity to shop without any preconceptions, or the questions currently being raised as to whether or not there is still a need for gendered fashion weeks. But when it comes to underwear, rarely have these ideas been discussed. Styles for women seem stuck in the past, and made with the male gaze in mind – think lacy, racy thongs or underwired bras with push up cups. Sure, women’s boxers are common, but designs often lean towards resembling more traditionally ‘masculine’ underwear – there remains a tension between comfort and femininity. The idea of MARIEYAT was initiated during her second year at the college, and upon graduating, she began to work on building the label immediately. 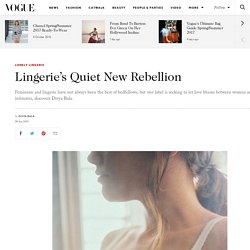