Leading Beyond the Status Quo – Any Day A. #Leadership Tools & Resources ~ #infographic. Confusion and Uncertainty - How NOT to Deal With It. This Is Generation Flux: Meet The Pioneers Of The New (And Chaotic) Frontier Of Business. The Monkey Economy: Freakonomics Radio Live in St. Paul. Emotional Equations » Blog. Positive Intelligence. Strategic learning. This One Leadership Quality Will Make or Break You. Positive Intelligence. Artwork: Yue Minjun, Laughing Painter, 2003, oil on canvas, 70 x 50 cm In July 2010 Burt’s Bees, a personal-care products company, was undergoing enormous change as it began a global expansion into 19 new countries. 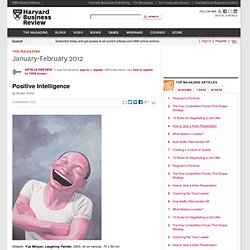 In this kind of high-pressure situation, many leaders pester their deputies with frequent meetings or flood their in-boxes with urgent demands. In doing so, managers jack up everyone’s anxiety level, which activates the portion of the brain that processes threats—the amygdala—and steals resources from the prefrontal cortex, which is responsible for effective problem solving. Burt’s Bees’s then-CEO, John Replogle, took a different tack. Each day, he’d send out an e-mail praising a team member for work related to the global rollout. That outcome shouldn’t surprise us. In fact, it works the other way around: People who cultivate a positive mind-set perform better in the face of challenge.

Develop New Habits Jot down three things they were grateful for. ICTlogy » ICT4D Blog » Leadership in a digital age: networks, digital competence and social networks. By XPLANE & Nitin Nohria. Go Ahead, Take that Break - Whitney Johnson. The Oath Project. The Wisdom of Humor. How a Good Leader Reacts to a Crisis - John Baldoni - The Conversation. By John Baldoni | 1:12 PM January 4, 2011 There is something about a big snowstorm that brings out the best, or more often the worst, in big city mayors. 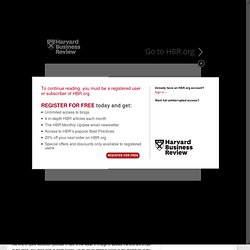 If, as former Speaker of the House Tip O’Neill once said, “All politics is local,” then you would think that the first hint of snow in the forecast would prompt mayors to relocate their offices temporarily to where the snowplows are dispatched. Mayor Mike Bloomberg, who recently won a third term, and is widely regarded as an adept city leader, has come under fire for inefficient snow removal in New York City. Most of the complaints came from residents in the so-called outer boroughs — e.g., the four that are not Manhattan.

But across the Hudson, Newark Mayor Cory Booker has received acclaim for his response to the nor’easter snowfall, despite taking flak on a host of other matters. We like to see our elected officials in action. Take a moment to figure out what’s going on. Act promptly, not hurriedly. Manage expectations. Keep loose. What Employees Want More Than A Raise in 2012 - Forbes. Leadership / Management. If They Gave Awards for Poor Leadership... - John Baldoni. Maslow 2.0: A New and Improved Recipe for Happiness. Transformational Leadership Blog. How I've failed. Transformational Leadership Blog. Change Management - Leading and Managing Change in a Multi-polar world. 5 Productivity Myths That Need to Be Busted. Phenomenological Leadership: An Old Philosophy for Modern Leaders - Rethinking Complexity.