New Male Birth Control Pill Too Good to Be True? Aging while female is not your worst nightmare » Feminist Current. I’m going to tell you a story that is so common and so troubling it is effectively split off from the emotional lives of young women, tucked away into whatever neural recesses exist for the purpose of shelving information that feels irrelevant yet distantly threatening. 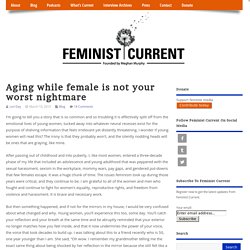 I wonder if young women will read this? The irony is that they probably won’t, and the silently nodding heads will be ones that are graying, like mine. After passing out of childhood and into puberty, I, like most women, entered a three-decade phase of my life that included an adolescence and young adulthood that was peppered with the sexual harassment, sexism in the workplace, mommy wars, pay gaps, and gendered put-downs that few females escape. It was a huge chunk of time. The issues feminism took up during those years were critical, and they continue to be.

What Science Tells Us About the 'Ideal' Body Shape for Women  Many scholars of Renaissance art tell us that Botticelli's Birth of Venus (c. 1486, pictured above) captures the tension between the celestial perfection of divine beauty and its flawed earthly manifestation. 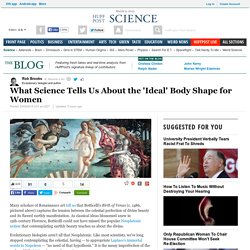 As classical ideas blossomed anew in 15th-century Florence, Botticelli could not have missed the popular Neoplatonic notion that contemplating earthly beauty teaches us about the divine. Evolutionary biologists aren't all that Neoplatonic. Like most scientists, we've long stopped contemplating the celestial, having -- to appropriate Laplace's immortal words to Napoleon -- "no need of that hypothesis. " It is the messy imperfection of the real world that interests us on its own terms. My own specialty concerns the messy conflicts that inhere to love, sex and beauty. Waist to hip Nowhere does the barren distinction between biology and culture grow more physically obvious than in the discussion of women's body shapes and attractiveness. 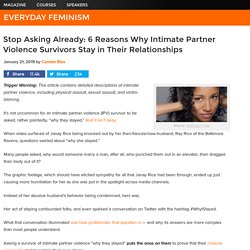 It’s not uncommon for an intimate partner violence (IPV) survivor to be asked, rather pointedly, “why they stayed.” And it isn’t okay. When video surfaced of Janay Rice being knocked out by her then-fiancée/now-husband, Ray Rice of the Baltimore Ravens, questions swirled about “why she stayed.” Quand le sexe prit le pouvoir. Overly Sensitive, Highly Emotional, and Other Feminine Flaws. That’s my (admittedly random) approximation of the number of times I’ve been called highly emotional or otherwise plastered with the overly sensitive label. 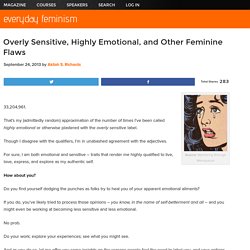 Though I disagree with the qualifiers, I’m in unabashed agreement with the adjectives. For sure, I am both emotional and sensitive – traits that render me highly qualified to live, love, express, and explore as my authentic self. Can a show about murdering women actually be feminist? The endless parade of serial-killer dramas on TV today raises an uncomfortable question: What does it mean that we as a society seem to find violence against women endlessly entertaining? 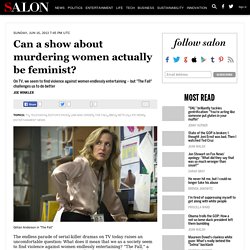 ”The Fall,” a BBC2 series now streaming on Netflix, forces us to take a hard look at ourselves as viewers and what we like — and makes the powerful point that killers who target women aren’t as deep or interesting as other shows make them seem. At first glance, the show might look like “Law & Order: SVU,” or pretty much any murder series of the last decade. A man, a grief counselor, married with two adorable kids, cannot control his urges to hurt and control women. “Herself” – Does anyone really listen to what a naked woman says? Herself, a new “feminist” photo project currently making the rounds online, features lots of naked women. 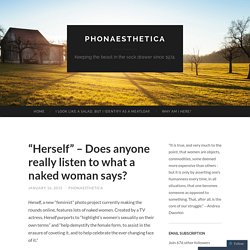 Created by a TV actress, Herself purports to “highlight’s women’s sexuality on their own terms” and “help demystify the female form, to assist in the erasure of coveting it, and to help celebrate the ever changing face of it.” Sounds legit! I don’t know what “the erasure of coveting it” means (“you guys, let’s stop being jealous of each other’s boobs”)? Can Broad City Rape Rape Culture? Throwing it out there: I have for sure fallen asleep during sex before. 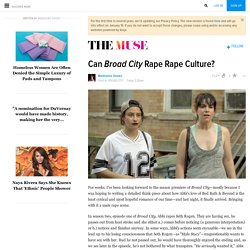 I don't mean this in a "oh WHAT, now every time you fuck a passed out person you're a RAPIST??? " way cause, duh, so many things wrong with that statement. But sex doesn't exist in a vacuum, and Broad City certainly explores every fucked up, funny, and/or uncomfortable sex situation two chicks can find themselves in (the dentist scene from the first season is one of the best things I've ever seen). SO that said, this reminds me of the Mindy Show butt sex episode. I think it's worth looking at this episode, like the Mindy one, as an exploration of where consent ends and begins between two people (who are enthusiastically fucking one another), according to both partners. Nearly One-Third Of College Men In Study Say They Would Commit Rape. Close to 1-in-3 collegiate males admitted in a recent study they would force a woman to sexual intercourse, but many would not consider that rape, Newsweek reports. 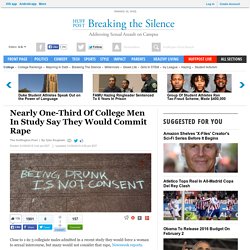 The survey found 31.7 percent of men said they would act on "intentions to force a woman to sexual intercourse" if they could get away with it, but just 13.6 percent said they had "intentions to rape a woman" if there weren't any consequences. The authors of this study note the difference relies on whether or not they described what constitutes sexual assault, versus whether they simply called it rape.

For this study, the researchers defined rape as "intercourse by use of force or threat of force against a victim's wishes. " Almost No Lingerie Required  One day I woke up to the realization that I wanted to feel more heat in my life. 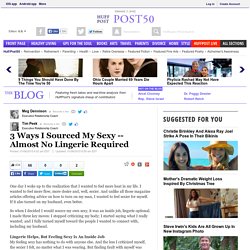 I wanted to feel more flow, more desire and, well, sexier. And unlike all those magazine articles offering advice on how to turn on my man, I wanted to feel sexier for myself. Boutonnage à droite et boutonnage à gauche ; pourquoi cette inversion ? « Ederton. The Everyday Sexism of Women Waiting in Public Toilet Lines. Soraya Chemaly is a media critic and activist.

If you’re a woman, chances are you’ve a) spent time fidgeting in a long line waiting to use a public toilet, b) delayed a bodily function because you don’t want to or haven’t the time to waste standing in line to use a public toilet, c) considered sneaking into a men’s room—illegal in some places, or d) cursed loudly because of all of the above. Faced with a long restroom line that spiraled up and around a circular stairwell at a recent museum visit, I opted not to wait. Why do we put up with this? Winning a Weight-Loss Competition Made Me Hate My Body. Like a lot of women in the U.S., I watch my weight.

I worry about my body. I worry about my shape, the extra 10 pounds I’ll gain over the holidays and how I should probably eat more boiled eggs and join a weekend boot camp. I stress about what outfit will look right on my figure and how I can possibly Photoshop all my Instagram photos from my cell phone. I don't care if you landed a spacecraft on a comet, your shirt is sexist and ostracizing. Yesterday the European Space Agency landed the Philae spacecraft on a comet, a powerful step forward for humanity and science alike. However, slightly before the big moment, coverage of the event reminded us how much progress remains to be accomplished back on Earth. A number of the scientists involved on this incredible project were interviewed in the hours leading to contact by Nature Newsteam.

One of those Rosetta scientists was Matt Taylor, who chose to dress, for this special occasion, in a bowling shirt covered in scantly clad caricatures of sexy women in provocative poses. Le déploiement du genre. Trans-exclusionary radical feminism. Trans-exclusionary radical feminism (or TERF) is a subgroup of radical feminism characterized by transphobia, especially transmisogyny,[2] and hostility to the third wave of feminism. They believe that the only real women™ are those born with a vagina and XX chromosomes.[3] They wish to completely enforce the classic gender binary, supporting gender essentialism. The term "TERF" is not used by those in the group, who consider it a damnable slur, and think of themselves as perfectly reasonable radical feminists[4] (and, indeed, the only thing that should be called "feminism").

Some radical feminists, second wave feminists, and lesbian feminists/political lesbians (groups known to contain TERFs) have spoken out against transphobia and transmisogyny within their ranks.[5][6] Reality TV Thinks My Sister's Murder Is Sexy. Trigger warning: This article contains descriptions of graphic violence. My sister Jessie decomposed in her home for four days in the Arizona summer, her bodily fluids pooling with those of her murderer and long-time partner, Dallas Augustine, who put a bullet first through my sister’s brain and then through her own.

The bullet that killed my sister entered near the top of her head from inches away and exited her lower jaw, destroying her beautiful face, before it lodged in her shoulder. Because her body slumped forward, the decomposition was advanced to the point she was unidentifiable without dental records. Pour un féminisme matérialiste et queer.

How to Be Lonely in America  Pourquoi les gens défendent-ils des systèmes injustes, incompétents et corrompus? The Real Reason Fashion Labels Are Failing Plus-Size Women. Contrary to public perception, fashion designers do not hate plus-size customers. Full-figured fashion fans have been always been frustrated by the lack of selection from their favorite brands, and I don’t blame them. Clothing manufacturers actually do recognize the buying power of the larger sized shopper, but offering styles in plus is just not that simple.